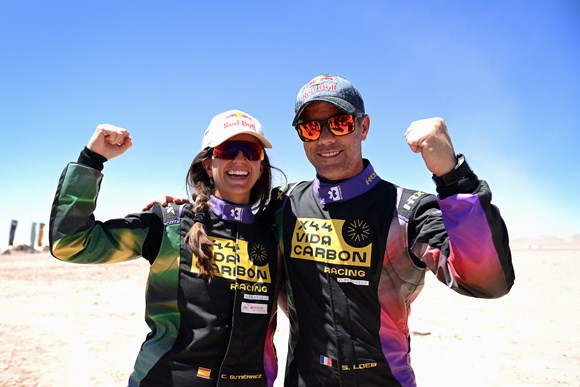 Sébastien Loeb and Cristina Gutiérrez finished second on course, but penalties for on track winners NEOM McLaren Extreme E dropped the team down the standings.

The American team had finished the race in third, but in pushing hard to make the most of the opportunity they received a penalty for missing a waypoint, which subsequently put No.99 GMC HUMMER EV Chip Ganassi Racing off the podium and into fourth. 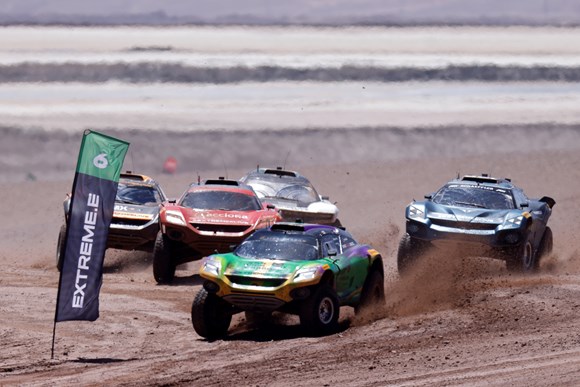 Sébastien Loeb, X44 Vida Carbon Racing, said: “We are very happy with the result today, of course. We were surprised to see that Rosberg X Racing weren’t competing in the Final, but we didn’t have a lot of time to think about it as we were racing straight away.

“It was a very strong fight against some great teams but Cristina was incredible, securing the fastest lap of all the drivers in the Final.”

Cristina Gutiérrez, X44 Vida Carbon Racing, said: “Today was amazing, we are so happy to have won the Copper X Prix and to still be in the fight for the championship. Rosberg X Racing are a really strong team so for them to not be able to drive in the Final was not good for them, but hopefully it is more interesting to have more than one team fighting for the championship in Uruguay!

“It was a very tough race so I was surprised to get the fastest lap, but it shows what an incredible opportunity Extreme E is providing for female drivers to prove ourselves and show we can compete against some of the best drivers in the world. Now we go to Uruguay, which is very good for me as I love to race in South America. Hopefully we can even get another race win and maybe the championship too.”

The scene was set for a thrilling climax to the Antofagasta Minerals Copper X Prix Final, with all three of RXR’s nearest championship rivals lining up on the start line while Johan Kristoffersson and Mikaela Åhlin-Kottulinsky watched on from the paddock. 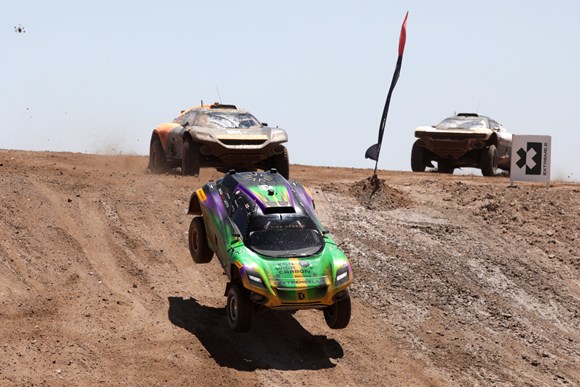 Loeb took the lead for X44 Vida Carbon Racing in the opening corners, while behind Tanner Foust muscled through the field to put NEOM McLaren Extreme E in second.

ABT CUPRA XE’s Nasser Al-Attiyah kept the other teams in his sights as all five ODYSSEY 21s remained close, with Foust putting more and more pressure on Loeb out in front.

The American threw everything he had into a left-hander, passing Loeb while sideways to put NEOM McLaren Extreme E at the front of the pack as the teams neared the Switch Zone. 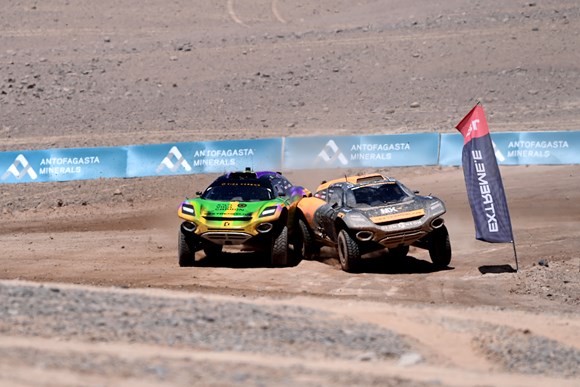 The fight for the win fell to Gilmour and Gutiérrez, and the Spaniard made clever use of her ENOWA Hyperdrive to steal the lead for X44 Vida Carbon Racing early on in their first lap.

The front two pulled away from No.99 GMC HUMMER EV Chip Ganassi Racing’s Sara Price in third, while Extreme E debutant Klara Andersson continued to impress for ABT CUPRA XE as she held off Laia Sanz in fifth for the ACCIONA | SAINZ XE Team.

More wheel-to-wheel action between X44 Vida Carbon Racing and NEOM McLaren Extreme E saw Gilmour side-by-side with Gutiérrez before passing down the inside to finish in first on course.

Aware of at least one penalty for NEOM McLaren Extreme E, Price pushed hard to close the gap to Gilmour, but a 5-second penalty of their own for missing a waypoint earlier in the Final thwarted her efforts and saw No.99 GMC HUMMER EV Chip Ganassi Racing classified fourth.

Laia Sanz crossed the line in fourth, having made it through despite Andersson’s defences, but the penalties for NEOM McLaren Extreme E and No.99 GMC HUMMER EV Chip Ganassi Racing meant the ACCIONA | SAINZ XE Team secured second place for the second time this season.

The penalties also promoted ABT CUPRA XE up the order, resulting in a third-place and a podium finish for Al-Attiyah and Andersson on her debut.

Carlos Sainz Snr., ACCIONA | SAINZ XE Team, said: “It was a very exciting weekend and now we need to look to Uruguay now and make sure we do a good final race.

“Even though we made it to the Final it was not easy from where we were. We have been consistent and have been improving, and in life you have to keep improving – although it’s difficult at my age!”

Klara Andersson, ABT CUPRA XE, said: “I can’t believe that we finished on the podium, I’m just so happy. My whole family has been watching from Sweden and they are super happy for me, and for the whole team, so now we celebrate!

“You only get one chance as a driver sometimes to show your pace, so of course I hope this has shown what I can do.”

To catch up on all of the racing action, you can read the Semi-Final 1, Semi-Final 2, and Crazy Race reports online.