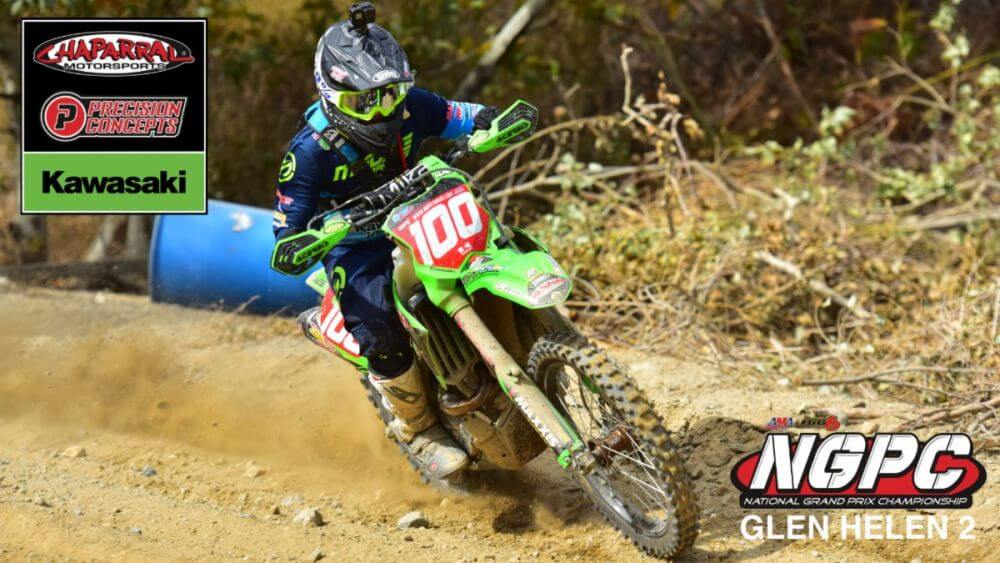 The PC Kawasaki team pulled into Glen Helen for the second time this NGPC season. In contrast to the wet conditions back in March, the lack of recent rain left a hard, dry base to the course. In spite of this, the hosting club did well to lay out a challenging race track and put down a decent amount of water, which allowed for good racing conditions. The race weekend culminated with the ninety-minute pro race midday Sunday.

After a solid week of recovery, Zach was feeling confident coming into Glen Helen. He was able to get the win in Saturday’s Open AA race, which was a boost, though many of the riders just use that event for practice. At the start of Sunday’s pro race, Bell and his KX450 rocketed off the line. He entered the Talladega first turn in the lead and quickly set out to pull a gap. Over the first few laps, Zach pulled a comfortable margin ahead of KTM’s Dante Oliveira, and was then able to settle in. Through the pit stop rotations, Bell continued to pull away from the field and ride his own race. He crossed the checkered flag to take the win and check off that first accomplishment in his return from injury.

“Today was good. I really worked on myself and my body this week in order to prepare for the weekend. It definitely paid off. I’ve been taking it race by race to not go out and get hurt again. So, I’m glad I was patient because I’m starting to feel strong. [My return to racing] was a little difficult at first, with how rough the tracks get, and the pace. But I’m excited with how this weekend went: to win yesterday (in AA) and then today. Overall it was a good weekend and it feels good to get back on top.”

Alvarez suffered an unfortunate fall through the first turn in Saturday’s 250 AA race, which left him with a sore ankle. JP put that out of his head for the Pro 2 event, as he looked to get back up front. As the Pro 2 riders thundered off the line, JP was quickly pinched and shuffled to the middle of the pack. He then had to avoid some chaos through the first couple corners, which sent him off track and further down the order. In his haste to move forward, Alvarez would have an early-lap tip-over to compound things. After regrouping, JP put his KX250 to work and began progressing through the field. After getting close to the top-five, a couple set-backs halted JP’s progress. With time winding down, Alvarez put in a final push, closing to within striking distance of both fourth and fifth place, but just ran out of time to make a pass. He crossed the line in sixth.

“I had a decent start. But going into the second corner a couple riders went down in front of me. I had to swerve off track and it put me pretty far back. I just couldn’t keep it on two wheels today, kept going down. I think I was putting a bit too much pressure on myself from being so far back in the race. That, and being in the championship hunt. It was a bit of a struggle. Next time I just need to calm down and get back to having more fun out there. After these past few weeks, my body’s been pretty beat up, too. So, I’m looking forward to resting up and then getting back to training for the next one.”

Clay was able to take the win in Saturday’s 250 AA race. It was another solid step forward in his return to form, and gave him confidence heading into Sunday’s Pro 2 race. Clay was toward the front of the pack off the start of the Pro 2 line and made a couple smart moves to get into fourth place early on. Over the first few laps, Hengeveld did well to match the pace of the riders ahead. After about thirty minutes, though, he began to feel some pressure from behind. Clay continued to fight hard with the riders around him, exiting the pit rotations in seventh. From there, Lil’ Henge did his best to keep on the heels of the lead group, finishing strong and crossing the line in seventh.

“The day started well. I got off to a good start and was running fourth. Then, I lost a couple positions toward the end. But there was more progress on the weekend. I was happy to have a really solid ride in 250 AA.That was a pretty good confidence booster for me. So, I’m stoked on that. I’m definitely going to work on my corner speed and that pace at the beginning, so I can be up at the top the entire race. So, overall, a pretty good weekend and I’m excited to go again in a couple weeks.”

“It was definitely great to see Zach back on form this weekend. I know he’s been a bit frustrated the past two rounds, but it’s been good to see his patience in terms of his recovery. It definitely paid off, as he was able to control the pro race from the front and rode strong for the full ninety minutes.

“Jake’s had a rough few rounds with some crashes, some minor injuries, as well as some plain unfortunate luck. The start definitely didn’t help him in Pro 2, and he was maybe pushing a little too hard at times. But overall, I’m happy with that kind of effort. He’ll get a little bit of recovery over the next week and a half, which will be welcome, I’m sure, with this hectic schedule.

“It feels almost like a worn-out theme, but there was more progress with Clay this weekend. It’s always good to get a win [in AA]. In Pro 2, he was up front and able to see the pace of the leaders for the first thirty minutes. That was great for him to get that experience back under his belt. Though he doesn’t lead on, I know these past three weekends, with the double-round in between, have taken toll on his wrist. So, it’ll be good for Clay to get a week and a half off to rest his wrist before we go again at Primm WORCS.”