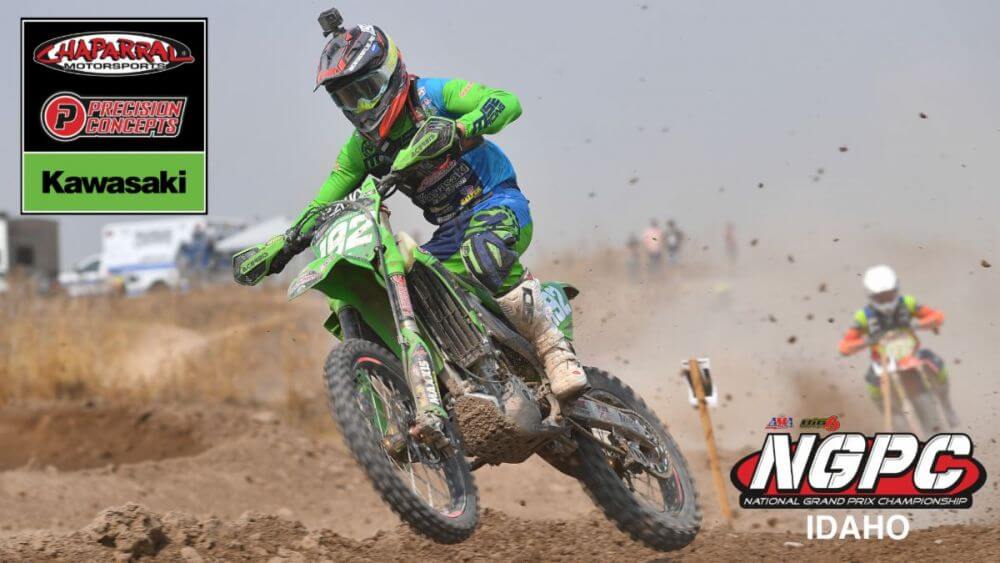 After a long hiatus, the West-Coast GP season got back underway for what will be a frenetic schedule of racing to close out 2020. The AMA NGPC series headed just south of Napoleon Dynamite’s home of Preston, ID for their fourth round. What awaited the riders was a pretty unique course layout. For example, not too many could say they’d previously raced through a corn field in their career. In addition to winding through the corn, the course had a wide, flowing grass-track, which offered options for the riders to choose lines and overtake, before heading to the Cache Valley Motocross track. Following such a long break in the middle of the season, many of the riders were eager to see where they stood when the gate dropped on Sunday.

The team went into the weekend minus Zach Bell, due to an injured collarbone. However, the return of Clay Hengeveld was very welcome after over a year of working through injuries. To put Clay’s return into perspective, this would be only his fourth grand prix event since the end of May, 2019. Joining Clay under the tent would of course be JP Alvarez, who entered the weekend second place in the Pro 2 championship and with an eye towards closing the ten-point gap.

When the gate dropped to release the line of Pro 2 riders onto the course, JP found himself instantly pinched off. Alvarez gambled on an outside gate pick, planning to get a quick jump and sweep around the field. However, he bogged slightly over the gate and consequently had nowhere to go as the pack of 250 pro riders pushed wide. JP was able to move forward from around 16th place, getting up to tenth by the close of the first lap. From there, Alvarez did his best to continue pushing forward quickly, but got caught in a few battles in the early-race dust. This unfortunately slowed his progress, which allowed the lead pack to open up a sizeable gap. Over the remainder of the ninety-minute race, Alvarez was able to work his way up through the top-ten, taking fourth-place honors at the checkered flag.
In His Own Words
“I felt pretty good out there. I hadn’t ridden the race bike in a while, so I had to get used to it again. But after Saturday’s [AA] race I felt pretty comfortable on it. Off the start [of the Pro 2 race] I kind of bogged down. I think it might have been me, but I was pretty much dead last off the start. And it wasn’t too much fun in the dust out there! When I got the bad start, I knew it was going to be a long race, but I was thinking it was a good I’d been doing a few MX races over the break for intensity. So, I just tried to sprint the whole race and was able to get fourth. I wish I could have got on the podium, but it is what it is. I’m definitely looking to get back on the podium [next weekend at the WORCS double-header] and keep the green bike up on top!”

Clay’s return began decently enough, as he slotted just outside the top-five through the first few corners. Although Hengeveld lost a couple spots in the first-lap chaos, his pace was good early-on. Through the first few laps, Clay climbed as high as fifth, just behind the lead pack of Tyler Lynn, Tallon Lafountaine, Mateo Oliveira and Mason Ottersberg. Lil’ Henge continued to hold a strong pace over the first hour in a competitive class. Through the pit-stop rotations, just after the hour-mark, Clay had shuffled back to the edge of the top-ten. Lat in the race, the dust was thick, and though Henge found a second wind, with three riders just ahead of him, he wasn’t quite able to pierce the thick cloud and crossed the finish line in a respectable ninth position.
In His Own Words
“It felt pretty good to be back out there. Definitely not the finish I wanted to get, but it’s a good spot to build from. So, I’m just super happy to be back out here racing and doing what I love. I felt like I got off to a good start, maybe fifth or so. Then, I kind of struggled in a few areas and lost a couple spots. It took maybe a lap or two to really get back into the racing groove. Having not raced for a while, I lost a little pace on the top guys, but I feel it’ll be easy for me to get it back and I can’t wait to go again. My ankle was a little sore, but my wrist is really good. So, overall, I was happy with how my body felt. Just going to work on a few things and I’ll be good to go. I’m excited for [the double round at WORCS]. I just want to have a clean weekend and get inside the top-five. That’s my goal. So, I’m just going to keep my eyes on that and stay focused.”

“It was definitely great to be back at the races after all of the craziness of this year. It was great to be at a different venue too. We were all a little unsure what to expect, but the course turned out really well. Maybe a little less dust could have helped the racing some, especially late-on, but all-in-all the facility was great and NGPC did a good job with the organization.

“JP put in a really good ride to salvage a fourth after the start he had. At one point, earlier in the race, I’d hoped he could push forward a little quicker to keep the leaders in sight. But with the dust, it could have been easy to make a mistake, pushing with too much haste. So, he rode aggressive, but patient when he needed to be, to keep it upright. We were happy with that.

“It was great to have Clay back at the races on the bike. I know the finish position isn’t what he wants, but the effort was plainly there. It seemed in the middle of the race, he shuffled back a little bit, but he caught a fire the last couple laps and was charging with a group of three riders just in front of him. Unfortunately, the dust was a little too thick for him to get close enough to overtake. But his drive and fitness were good, and the speed and race craft should come back quickly.

“All things considered, maybe not the results we wanted on the weekend, but the effort was there and I’m proud of the boys.”