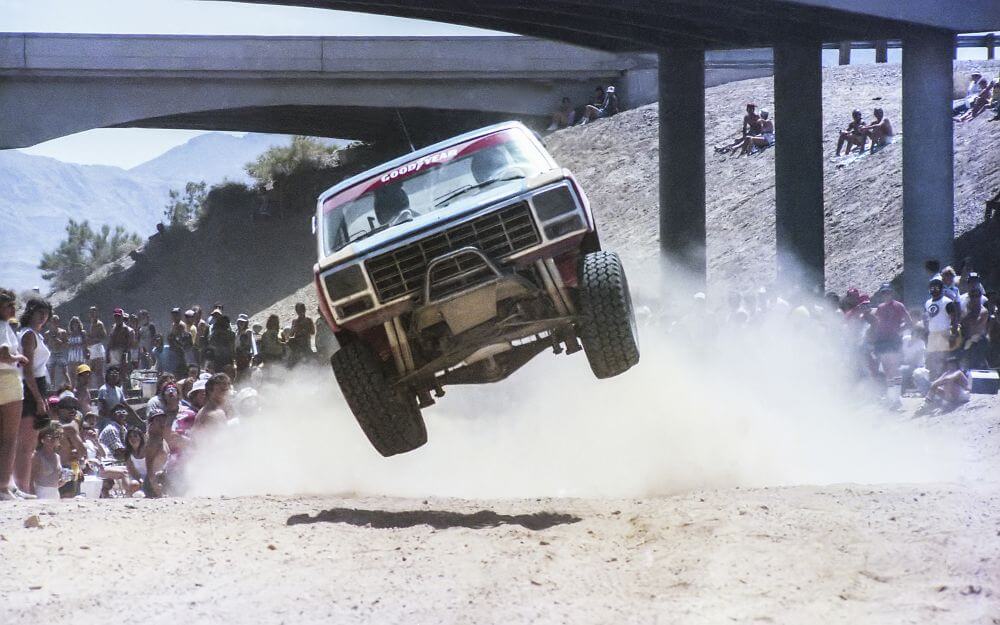 The Mojave Desert attracts what Hunter S Thompson once described as “a very special breed”  This “very special breed” makes an annual trek to Sin City to participate in “The Great American Off-Road Race” also known as The Mint 400.

The teenage memories I most fondly recall were of my Dad driving me from San Diego to Las Vegas in his Datsun pickup, getting a cheap room at Circus Circus, prepping my sparse gear and loading up on film. Yes, that was all I needed before heading downtown to Fremont street to engage in the pre-race activities! Photographing the cars and trucks on their way through contingency, spying “The Girls of The Mint 400”, collecting stickers and maybe one of my idols hats or a tee shirt!

Come race day we were up early and in position ready for what surely would be a spectacle. This race never disappoints with the high flying antics of the open class buggies, trucks, and back in the day, the class 6 sedans. You never knew what to expect which still remains today. With the last running of The Mint 400 seeing the Military Class, the Youth Racers, and the Hooligan classes it reminded me of my early experiences and what is being done to continue the tradition. Viva Mint 400!

1978. A row of class 5 Baja Bugs makes their way out of town at 30 second intervals. In the early days the class attracted many entries and was a very popular and affordable class to run being garage built and family supported.

1978. A class 6 sedan makes it way across the rough terrain. This class was always fun to watch as you never knew what was going to be entered or just how far they would make it! Many manufacturers were represented including Datsun, Oldsmobile, Subaru, AMC, Ford, Oldsmobile, and even a water cooled VW Rabbit!

1985. The team of Bill Howard and Bob Burchett thrill the large crowd just outside the starting line of the old Speedrome which was located near the current Las Vegas Motor Speedway.

1985. Dave Shoppe takes his class 8 Ford to the air while negotiating the course just under the I-15 north of town. The north course was notorious for race vehicle breaking rocks especially in the “Rock Garden” section of the course and the air filter choking silt was in abundance everywhere.

1984. The Roger Mears & Brent Foes class 7 Nissan makes it’s way through contingency on Fremont street. The manufacturers battles in the 80’s were at their fiercest with many of the manufacturers sponsoring multi truck teams in multiple classes.