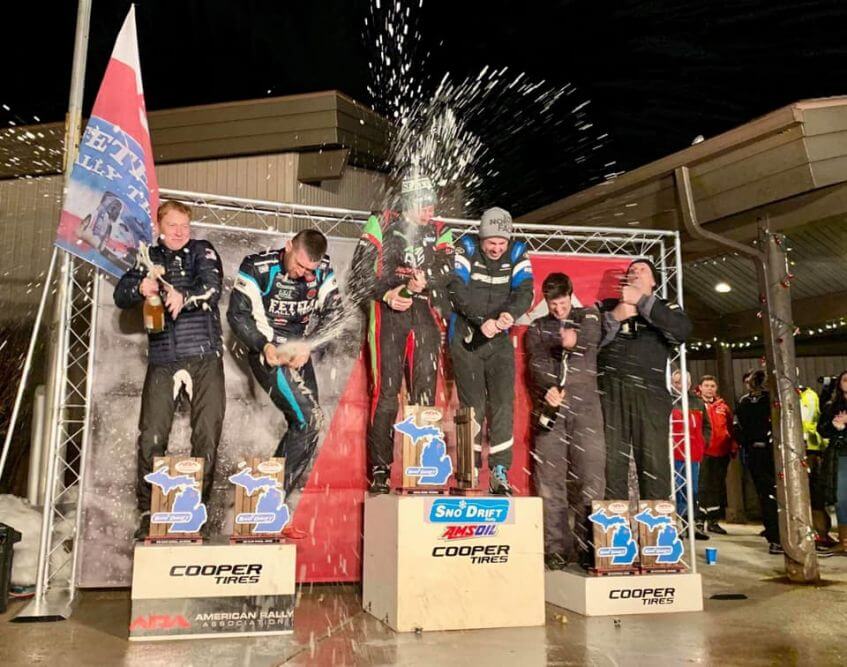 Atlanta, Mich. ~ Expect the unexpected when it comes to the Sno*Drift National Rally, this years opening round for the 2020 American Rally Association, presented by AMSOIL.

Pre-event forecasts called fo a mix of snow, rain and above freezing temperatures during daylight hours. Organizers believed that could lead to difficult stage conditions and the possibility of a large attrition rate amongst teams. While the stages were anything but ideal, this years Sno*Drift saw 39 of the 40 cars that started the rally finish all 116 stage miles.

As teams met enthusiastic fans at the Parc Expose in Lewiston ahead of Friday’s six nighttime stages, the optimism of a new year was mixed with an overwhelming desire to manage the difficulties that would quickly engulf them over the next few hours. With the weather changing its mind every few minutes, thoughts turned to managing the nights expectations, and more importantly, the final decisions on tire choices.

No matter what their tire direction, the 40 cars lined up and one-by-one embarked on the two-day journey to see Bonfire Alley from inside their rally car.

Barry McKenna and co-driver James Patrick Fulton were looking to overcome the issues that ended McKenna’s 2019 Sno*Drift early. McKenna was strong in his 2011 R5 on Friday night, winning five of the six stages and opening up a nearly two minute lead over 2019 winner Piotr Fetela and his new co-driver Kamil Heller.

On Saturday, McKenna made a change on tire set-ups, and it paid off as the veteran swept all eleven stages for the overall. The win was nice, as was the knowledge that he’s got an early leg-up in the overall championship race.

Chasing McKenna all weekend for the overall was the 2019 Sno*Drift winner Fetela. Friday brought a few communications issues after their intercom system went out for a few stages. He joked at the end of the day on Friday that “hopefully tomorrow will be better.” As the rally finished at the end of bonfire alley, Fetela’s mood had switched from being down to excitement as he and Heller finished second overall.

“This one (bonfire alley) was the best,” said Fetela. “Bon Fire. Unbelievable. It was good for (Heller) because this was his first rally here. That was a clean rally. We had a couple of issues with the intercom and stuff like that, but very happy.”

Rounding out the overall podium was the father-son tandem of Zachary and Ron Jacques. The Hard Knock Rally team unveiled its new 2015 Subaru WRX at Sno-Drift. Despite not rallying for the past three years, Ron was able to help his son navigate the event for third overall.

First we had to keep in mind that we had to get the car through this one to get to the next one,” said Zach. “Finish. First you got to finish, right.”

This season, the ARA focused on finding deeper competition in all of the national classes. Along with the overall, the series paired up the NA4WD and L4WD classes to form the LN4WD podium, and combined O2WD with L2WD into one competition class. The ARA also added the RC2 class, which features the growing Ford Fiesta R5’s championed by McKenna.

While McKenna was winning the overall, he was also in control of the top spot in the RC2 class. Following him to the podium in second was John Coyne and Co-Driver Ryan Dunham, who finished fourth overall. Frank Cunningham and Martin Brady put in a solid run at Sno*Drift to finish third in RC2 and fifth overall.

For McKenna, he is excited about the growth of the class and being able to bring in more competition in the national classes:

“Two years ago there was no R5′ here. Who knows what will happen in another two-to-three years, maybe 20-30, and that’s what we like to see.”

Primitive Racing’s Blake Lind won the 2019 ARA National NA4 championship, but with the newly combined LN4 class, he would have his hands full against the more powerful L4WD’s. But armed with a new co-driver for Sno-Drift, Seehorn Racing’s Cody Crawford, Lind ran at a great pace all weekend. He took the first six stages, and was never really challenged on Saturday.

Fighting it out for second on the LN4 podium were Michael and Morgan Engle and Ele Bardha and co-driver Corrina Roshea. The Engle’s finished second in the class and eventh overall ahead of Bardha-Roshea despite a couple of close calls.

Brad Morris and co-driver Doug Nagy drove their 2003 Mitsubishi Lancer to the overall win in 2WD. The finished ahead of fan favorite Iain Dobson and Max Freeman who were rallying their 1970 Ford Escort RS 1600 at Sno*Drift for the first time. Bret Hunter and Melissa Shorowski finished third. It was Shorowski’s first time competing in a rally.

Jimmy Pelizzari and Kate Stevens piloted their NA4WD Subaru to the overall ARA Regional win. The defending ARA East Coast Regional champions were extremely fast all weekend, and if they had entered as a national competitor, they would have finished third overall.

For full results, go to the Sno*Drift Event Page.

Up next is the Rally in 100 Acre Wood in Missouri in March.