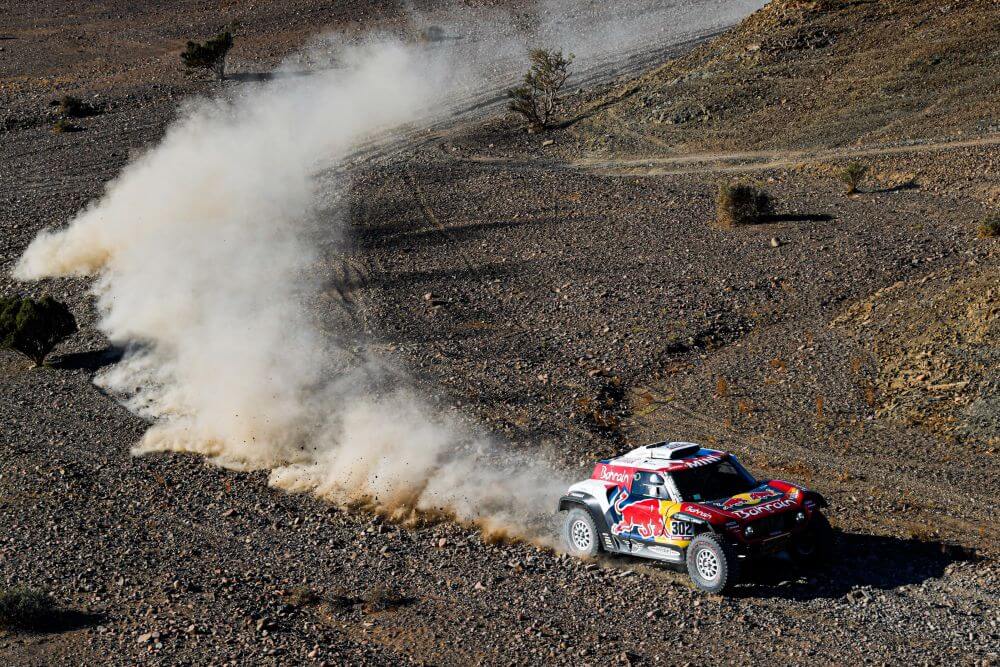 2020 Dakar: Challenges competitors to find their way back to Neom after Stage 3

The spirit of adventure was in full effect on Stage 3 of the 2020 Dakar Rally as the competitors tackled a 414-kilometre loop around the future megalopolis of Neom. With a perilous mix of canyons, mountains and sandy ground to cover, leaderboards across all five categories were given another major shake up.

As the first Saudi Arabian Dakar reached its maximum altitude of 1,400 metres, so Carlos Sainz (ESP) hit the summit of the car class for the first time. Alongside co-driver Lucas Cruz (ESP) – who read the roadbook for Sainz during Dakar wins in 2010 and 2018 – ‘El Matador’ picked up the pace on Stage 3 in his Mini Buggy. Today’s stage win, the 33rd of his illustrious Dakar career, has given Sainz an overnight lead in the car race.

“The landscape was fantastic, even if we didn’t have time to stop and enjoy it properly.” – Carlos Sainz

Staying closest to Sainz on the loop around Neom was defending car class champion Nasser Al-Attiyah (QAT). Second place on the stage puts Al-Attiyah and Sainz in the top two positions of the general classification, separated by less than five minutes. The Dakar may have moved location, but a fight for the lead between Sainz and Al-Attiyah is something very familiar at the world’s toughest rally.

The third quickest car on Stage 3 belonged to Kuba Przygonski (POL) who put a couple of tough days behind him to get back up to speed. Meanwhile, Stéphane Peterhansel (FRA)and Giniel De Villiers (ZAF) maintain their places in the overall Top 10.

“We lost so much time on the first day and now we’re determined to enjoy the rest of this rally.” – Kuba Przygonski

In the bike race it was navigation that was once again the big talking point with plenty of riders struggling to catch the waypoints. Ricky Brabec (USA) kept his Honda on course throughout to take the stage win. Red Bull KTM Factory Team rider Luciano Benavides (ARG) did his best to keep up despite the added difficultly of riding part of the way with an injured hand.

“A big rock span out from a rear wheel in front and hit my hand. I’m going to need to get that checked out.” – Luciano Benavides

Two flat tyres forced Chaleco Lopez (CHI) to drive conservatively in the SxS race and as a result he has slipped back to second in the general classification, 15 seconds behind new overall leader Casey Currie (USA).

“Overall, considering how much rough stuff there was on the stage I think we have to be happy with our result.” – Mitch Guthrie Jr

Guthrie Jr’s team-mates Cyril Despres (FRA) and Mike Horn (SUI) finished their day’s racing when their OT3 came to a standstill 274 kilometres into the special stage. They were brought back to the bivouac were their machine will be repaired overnight so they can continue their coaching mission from within the Dakar Experience class.

The third OT3 at the Dakar, driven by Blade Hildebrand (USA), was in contention for a stage win for more than 250 kilometres of the special. Unfortunately Hildebrand’s vehicle was struck with a technical issue with its transmission which ended his hunt for the day’s fastest SxS time. Hildebrand will join Despres and Horn in the Dakar Experience class tomorrow for Stage 4.

Even in the truck race there was evidence of the damage that the stony ground in Saudi Arabia can do the vehicles at the Dakar. The mighty Kamaz race truck of Dmitry Sotnikov (RUS) came off second best in a collision with a rock that broke its front axle.

“I’m very happy to have Andrey Mokeev alongside me reading the roadbook, his experience is invaluable.” – Andrey Karginov

In the quad race Ignacio Casale (CHI) had to settle for third place on the stage, but he maintains his overall lead. The two-time quad bike champion enjoys a 15-minute advantage over Rafal Sonik in second place.

Tomorrow’s stage takes the Dakar convoy on to Al Ula via a timed special stage of 453 kilometres. Heading west the route leaves behind the Red Sea and travels east across spectacular moonscape terrains.