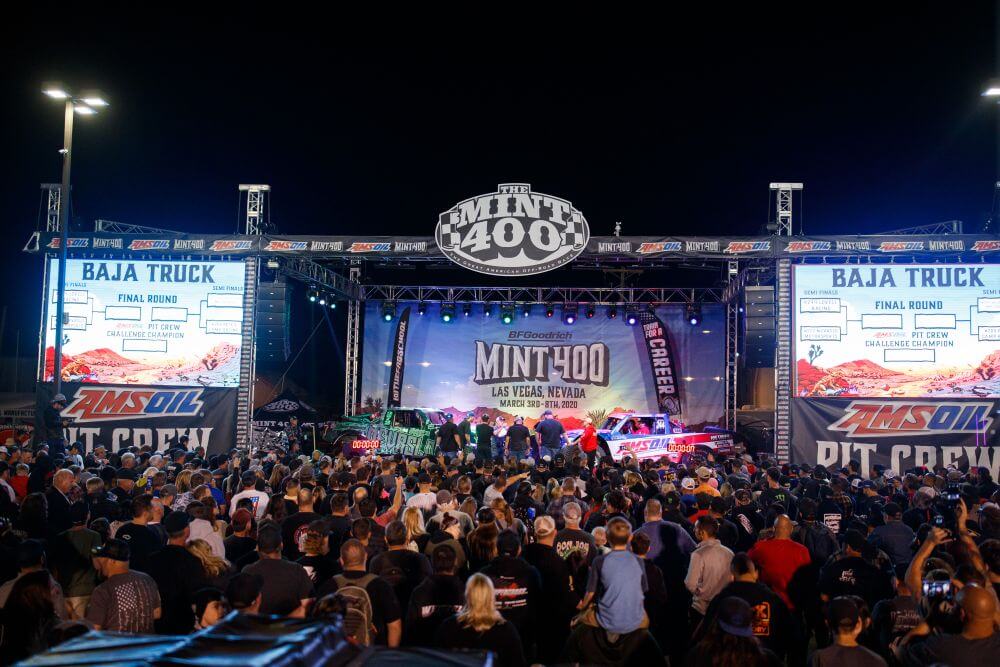 The numbers from the 2020 BFGoodrich Tires Mint 400 are in.  And they are great. The Mint 400 continues to expose off-road racing beyond the traditional off-road fans via outreach to mainstream motorsports fans and beyond. Only The Mint 400 and King of The Hammers continue to grow exponentially year after year. The Mint 400 is not just an off-road race, it’s an event. It’s a celebration of American automotive culture, and in America we drive trucks and jeeps.

In only their third year of live streaming, The Martelli Brothers knocked the livestream out of the park, reaching over 800K uniques and broadcasting for 26.5 hours of glorious off-road coverage. The production included a stunning mix of ground cameras, drone, helicopter and live in car camera on off-road G.O.A.T., Rob MacCachren. The coverage ran into the night and culminated in a super dramatic finish that resulted in Luke Mcmillin furthering his family’s legacy. Luke’s father off-road champion Mark McMillin and his cousin off-road champion Andy McMillin have both previously won The Mint 400.

The lack of support by television networks has not held back the growth of off-road racing. Rather, both Kings of the Hammers and The Mint 400 have been motivated by the challenge and have developed outstanding in house produced livestream packages and have far exceeded the expected numbers, proving that there is a massive sleeping giant of off-road racing consumers globally.

The Mint 400 is owned by motorsports content powerhouse Mad Media, who has made a massive investment turning The Mint 400 into a content producing supernova. The Mint 400 also has the most robust social media of any race in off-road or pavement with the combination of the massive amount of content produced by Mad Media such as the “Road to The Mint 400” series, racer, fan and sponsor content. The quadfecta proved to be a potent engine producing nearly 10 Million dollars on earned media value according to the 2019 3rd party Hookit Report. Similar to the World Surf League who has adopted a multi outlet strategy, The Mint 400 uses Facebook, Instagram, Youtube, LinkedIn and Television all to distribute live content and original programming.

The best Livestream in Off-Road Racing

In case you missed it you can re-watch the entire 2020 BFGoodrich Tires Livestream on Youtube:

What other off-road race has a parade down the world famous Las Vegas Boulevard with tens of thousands of spectators looking on? At any given time there are roughly 3 Million people in Las Vegas. The Mint 400 parade is the perfect way to kick off Mint 400 week in Las Vegas. The best way to get somebody’s attention is to drive up their driveway!

Las Vegas is the party capital of the world and when you bring 517 race teams into Vegas you better believe there is going to be a party. The Wednesday night kick off-party at the notorious Hogs & Heifers was a proper way to start the week. The street was lined with off-road race cars and bikes.  Thursday night was the big night with the Amsoil Pit Crew Challenge on the main stage followed by a free concert featuring The Eagles of Death Metal rocking in front of thousands of fans. It was the perfect way to get loose before the oncoming off-road battle. The integration of music into motorsport events is tricky oftentimes promoters pay for a big band to draw in more audience only to have it backfire. The Eagles of Death Metal as a free show was the perfect way to integrate music into off-road racing, not to mention  lead singer Jesse Hughes raced the next day in the celebrity Zero One car on team BMF with UTC fighters, Donald Cowboy Cerrone, Yair “Pantera” Rodriguez, and Brian “T-City” Ortega. Jesse brought the car in on the last lap finishing around midnight joining the Mint 400 illustrious celebrity alumni including Ted Nugent, Chuck Norris, Steve McQueen, James Garner, and Patrick Dempsey.

No other off-road race has had the consistent high level of TV coverage than The Mint 400. For the last 10 years, The Mint 400 has benefited from The Martelli Brothers passion for off-road racing. Both Matt and Josh are extremely hands on with cinematography, production, and script writing. Their motorsports content firm Mad Media has consistently led the way in creating culture defining content including everything from Gymkhana 1- 3 to the XP1K series and thousands of pieces of content for the biggest brands in off-road racing and action sports. Their all star team of motorsports cinema creatives in lead by motosports content journeyman Lonnie Peralta who also helps hand select the team which includes director of Cinematography Milan Spasic, Cinematographers Kim Bird, Will Roegge, Derek Eldrige, and Nathan Miller. The team also features stunning aerial cinematography from John Tamburro with pursuit aviation as well as off-road aviation master Jim McCoy with arel cinematographer Eric Everly. The production also features multiple contributors including Justin Chaission and John Tuba. The Mint 400 TV coverage has aired on NBC, NBC Sports, Fuel TV, ESPN, and ABC reaching hundreds of millions domestically and internationally.

Every show is also available worldwide on youtube garnering over 24 million views worldwide.

A photo is worth a thousand words, and The Mint 400 photo team has produced hundreds of amazing images to showcase The Mint 400 to the world. Driven by Mad Media’s Director of Photography Vincent Knakal the motorsports photography superteam features Ernesto Arazia, Tom Leigh, Louis Yio, and the mighty Larry Chen. The Mint also attracts talented photographers from all over the world looking to capture the beauty of the Mojave desert in contrast with the spectacular mayhem of the worlds greatests off-road race. No other off-road race boasts such a talent rich pool of photographers. The ultra media friendly event produces tons of stunning images every year prolifetting off-road racing with the romance of the wild west.

The Return of the Bikes

After bringing the bikes back in 2019, The Martelli brothers continued to re-connect the bike community with desert racing by both creating a new Hooligan class for desert racing and by bringing Rolands Sands Super Hooligan Racing to the start finish. This year they also partnered with the NHHA to bring in more bike competitors including youth racing creating a new generation of off-road racers. Notable hooligan bike entries were Mark Atkins aka Rusty Butcher and son of off-road motorcycle icon Malcom Smith, Alexander Smith who managed to finish 2nd on his Ducati Scrambler. Bikes have always been a critical part of off-road racing culture and it’s good to see a promoter give them the respect they deserve.

Six years ago The Martelli Brothers started youth UTV racing at The UTV World Championship since that point UTV youth racing has exploded all over the country. Preceded by Trophy Kart racing which quickly escalated into $50,000+ race cars for kids and eliminated most families, youth UTV racing is much more affordable and now The Mint 400 has not only added youth racing but also created a new Youth 1000 class that bridges the gap from the RZR 570s. This year Mint 400 also included youth bike racing curated by the NHHA. The youth are our future!

The Mint 400 has managed to become more than an off-road race. With the two day off-road festival on Fremont Street and the expanded Mint 400 Start/Finish Line Midway in Primm, NV, The Mint brought together exhibitors, food and beer, Roland Sands Super Hooligan Racing, Monster Truck demos, Sierra Car demos and Sand Drag Cackle Fest, into a festival like atmosphere that keep the crowd engaged for a full day of motorsport fun! The environment is kid and family friendly and feels like a country fair on steroids!

“In some circles, the Mint 400 is a far far better thing than the Superbowl, the Kentucky Derby, and the lower Oakland roller derby finals all rolled into one.” Hunter S. Thompson – Fear and Loathing in Las Vegas

The Martelli brothers initiated the Mint 400 desert clean up in 2014 as a way to show that off-roaders were actually environmentally responsible and shake the label that they were out harming the environment. “First off I want people to understand contextually how little land off-roaders actually use the environment. When we actually tried to measure it was less than .01% of the Mojave. Second, we want people to understand that the last thing we want to see is trash in nature. The whole reason people enjoy off-roading is to escape the confines and stress of the city. The last thing we want to see is trash running the beauty of nature.”, stated Mint 400 CEO. In 6 short years and with the recent support of Republic Services the Mint 400 has grown the desert clean up to over 600 volunteers who pulled 25 tons of trash from the Mojave desert! “We want to show people that they can make a difference and that our deserts need to be cleaned up. Most of this trash comes from illegal dumpers and shooters. It’s our goal to turn this into national, then global desert clean up day.” stated Mint 400 COO Josh Martelli. Volunteers were rewarded by great weather, free food, and a massive Mint 400 raffle.

Off-Road racing was started by veterans who after returning from war were frankly bored. In 1967, the Eikins brothers (both WWII veterans) did the first peninsula run spawning what would become the Baja 1000. That same year Mint Hotel PR director Norm Johnson enlisted the help of his buddy Mel Larson (Also both WWII veterans) who was a racer and promoter based out of Arizona to send two buggies from The Mint hotel to a sister hotel in Reno – Tahoe. Both efforts garnered national attention and spawned races the very next year (The Baja 1000 and The Mint 400) effectively starting off-road racing culture as we know it today.

This year, The Mint 400 launched the Military Challenge as a way to raise awareness and financial support for military veterans and highlight the military’s ongoing involvement in off-road culture. All five branches of the United States military competed in Polaris RZR’s and teams with active duty military and veterans raised over 100k for military charities. The Military Challenge was supported by Polaris RZR, Oak Grove Technologies, Zero 1, Aamco, Sheepdog response and a host of regular people donating money to each team! The Military challenge originated when Mint 400 CEO Matt Martelli saw the efforts of Col Jody Lynch and former UFC fighter Josh Koschek raced their personal Polaris RZR in 2019 and raised over $20,000 for the Marine Raider foundation. Martelli sought to expand on the ideas and make it a part of The Mint 400 ongoing. “It is time we recognize that the Military is part of the DNA of off-road culture. Freedom is not free. We need to take care of our brothers and sisters who have sacrificed and continue to protect our liberties,” stated Martelli.

The 2020 Mint 400 set a new record for women participating in an off-road race. “We were raised around lots of strong women.  Off-Road racing happens to be a sport where physicality is not necessarily an advantage. When you see women like Sara Price and Kristin Matlock not only compete but beat the men, it shows other women this is not just a sport for men,” stated  Mint 400 COO, Josh Martelli. The Mint 400’s pro-women stance will undoubtedly attract more women participants, spectators, and sponsors. “I think we are close to cultivating a modern day Michèle Mouton. We have so many young women coming up through UTV racing. The future of off-road racing will be much more diverse than it has been for the last 50 years,” commented Mint 400 CEO Matt Martelli.

The 2020 NORRA Mexican 1000 Postponed Until October Previous post
Sonora Rally – SS4: What Goes Up, Must Come Down Next post