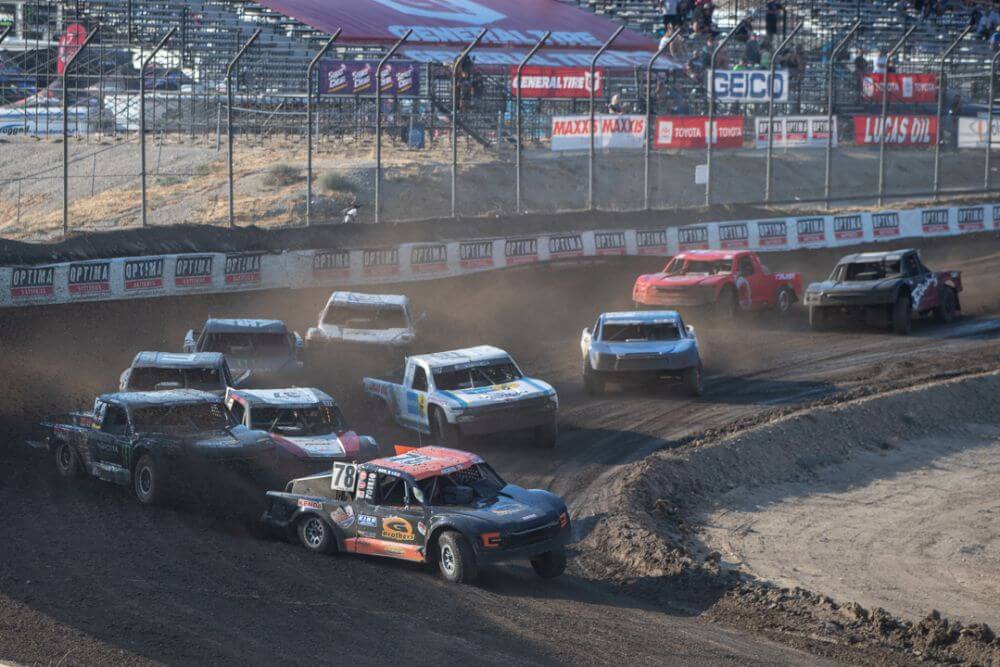 If Jerett Brooks wanted to make a statement about defending his Lucas Oil Off Road Racing Series Pro 2 title, he certainly succeeded as the season finally got underway at Glen Helen Raceway in San Bernardino, Calif., this past weekend. Brooks took a pair of victories as the series raced for the first time in 2020 in front of empty grandstands, with only crew and family in attendance per California COVID-19 protocols.

Brooks, racing his 2019 championship Unlimited Pro 2 with new K&N sponsorship on the side joining Bilstein and General Tire, and now burdened with a restrictor and added weight, qualified quickest on Saturday but started fourth due to the inversion. An early battle between Brooks, Brian Deegan and RJ Anderson allowed polesitter Ricky Gutierrez to put a gap on the rest of the field, but once Brooks was past Deegan, and Anderson dropped out due to a busted radiator and overheated engine, Brooks closed the gap and got by Gutierrez in short order. Gutierrez had his best finish to open his second season of racing Pro 2, while Deegan was third after getting some good luck for him, but bad luck for Ryan Beat. Beat had taken third form Deegan, but got caught up in a lapped truck’s spin and had to settle for fourth.

On Sunday, the LOORRS competitors raced on a slightly different version of Glen Helen Raceway’s short course. For the first time the series opted to use two variations of the same track on the same weekend. The slightly longer course used on Sunday features a tighter Turn 2, adds a right turn and bypasses the rhythm section that often catches drivers out and has wrecked more than its fair share of trucks and buggies. Some drivers expressed disdain for the Sunday track, which was first used by LOORRS last fall, but it also seemed to suit some drivers better.

Brooks, though, was just as successful on Sunday, although it may have required some misfortunate for Ryan Beat. Beat was the quickest qualifier in his Midwest-spec truck and started on pole, and looked to be able to handle any challenges Brooks threw at him. But then he blew his right rear tire in a hard landing, and Brooks was in the lead again with Doug Mittag, borrowing Brandon Arthur’s Pro 2 to get the season started while he finishes his new truck, following. Beat did have some luck thanks to a yellow, which meant he didn’t lose a lap changing his tire. Beat and Deegan would have an impressive battle for what would end up to be third place, which Beat won, but Brooks and Mittag were long gone.

“We weren’t as prepared as we should have been, and it showed,” Brooks said. “We’re working our butts off trying to build our new truck, so we kind of came in pretty rusty. I was just kind of putting it down all weekend, just put in fast laps and be really consistent. Huge thanks to Tanner Stephens, he came on board this year, and Nick Tenbruin. It’s cool to come out here and back up that championship, and sweep the weekend with fastest laps and two wins.”

Brooks added that he felt he had something for Beat even without Beat’s blown tire. “Ryan was really quick at first, but I wasn’t prepared for the track to be ripped up like that,” he explains, talking about the track preparation the LOORRS crew did to try to keep the track from drying out in the hot and windy conditions. “It was just coming into us, and before that, we were all over the back of him, so I wasn’t too worried.”

With no prior champions, Pro Lite is wide open this year. Two different Pro Lite veterans asserted their drive for the title at Glen Helen, but some rookies also made an impression. One of those rookies was 2019 Mod Kart champ Mason Prater, who started on pole for Saturday’s race and led until Christopher Polvoorde passed Brock Heger and then caught Prater. Once in the lead, Polvoorde was untouchable in his Ford/Steel-It Ford Ranger. The other rookie besides Prater to make an impression was Madix Bailey, who drove a steady race to claim third behind Ronnie Anderson.

Polvoorde looked to have a good shot at a repeat victory on Sunday, starting from pole. But he over-rotated in Turn 2 and got banged around by several trucks, and his day was over shortly thereafter. That left Cole Mamer, who had run toward the front the day before until a mechanical problem, in the lead in his Falken Tire Pro Lite. Heger launched a few attacks, but could never completely close the gap and had to settle for second. Bailey was third once more for his second podium in his Pro Lite debut weekend.

The Pro Buggy class is loaded with former champions, from 2019 points winner Eliott Watson to three-time champ Darren Hardesty Jr, back after a year’s hiatus, to former champ Cameron Steele. But it was two drivers who had never won a race that split the victories at Glen Helen. Matt Brister qualified second for Saturday’s race behind Hardesty, but started on pole thanks to a two-place inversion. He grabbed the lead at the start and never relinquished it, taking his Fast Monkey Funco to his first win over Hardesty and Trey D. Gibbs.

On Sunday it was Gibbs’ turn to sit on pole and lead the distance in his Self Made Training Facility/Bilstein Alumi Craft. Watson, who spun early in Saturday’s race and beat Gibbs to third the day before, was second, never really able to mount a serious challenge. Dale Ebberts, a desert racer running his first LOORRS race, was third.

The Lucas Oil Off Road Racing Series is set to visit Lucas Oil Speedway in Wheatland, Mo., next – a stop it missed in 2019 due to storm damage at the track. The race will be a tripleheader on Aug. 21-23, so after that race the season will be effectively half over, as five of 10 scheduled rounds will have been completed. The remaining five rounds will be split between three weekends – at the moment scheduled for Wild Horse Pass Motorsports Park in Chandler, Ariz., then back to Glen Helen, and the season finale back at Wild Horse Pass. With three rounds in one weekend, a series first, it will be a big weekend for any drivers intending to make a serious run for a title.