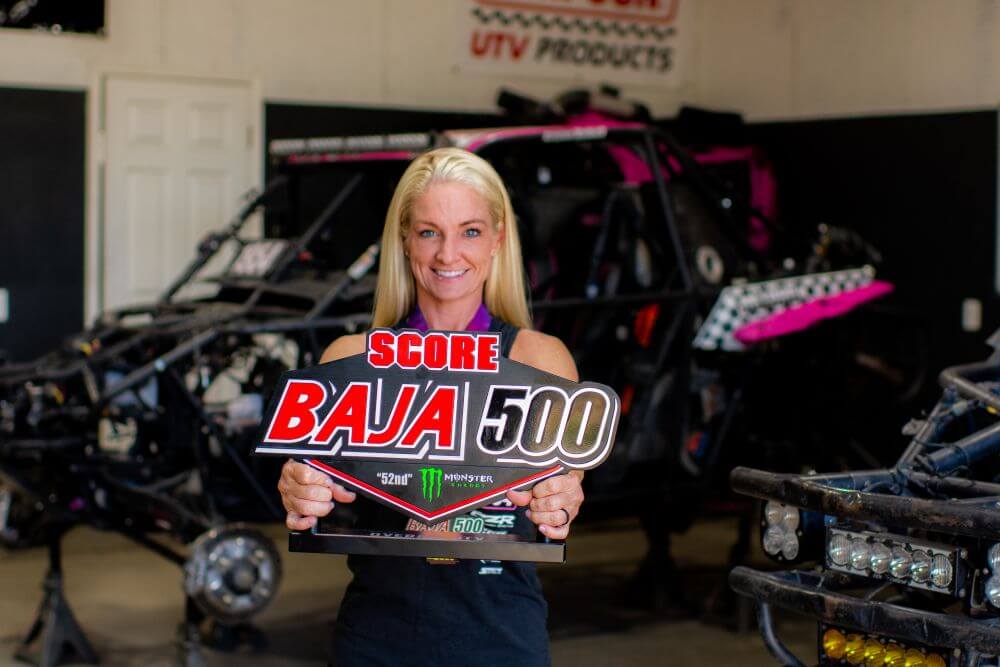 After several rescheduled races due to the Covid-19 crisis, the Baja 500 was finally able to kick off.  It was the first race of the 2020 SCORE season after the cancellation of the 250 and 400 races.   A week after the checkered flags dropped, we sat down with Overall UTV Champion Kristen Matlock and her shop in San Diego, CA, to get a little insight from the mind of a champion.

“We immediately pushed as hard as we could off the start!” Matlock explained her and her new copilot’s strategy.  Max Eddy Jr is new to the Matlock racing team, but definitely no stranger to the sport.  Having raced moto for many years, copilotiing the Chattanooga Whiskey Trophy Truck team, and even racing in Dakar, Eddy was ready to take on the new challenge in Baja with Matlock.  Having not driven together much at all, Matlock and Eddy seemed to speak each other’s language instantly, and it was an instant spark as pilot and copilot.

After months of anxious waiting, it was time to race – Matlock requested a rear start as she always does.  She explains why, “I like to know exactly where I am, and the plan is to just pass everyone I can, and get up to the front.”  The race took place in San Felipe, which isn’t normal for the Baja 500, and instantly the team found themselves in the “whoop section”, being tossed left and right from the huge dips and turns.  They came into the first pit section at RM36, fortunately it was just a visual pit, and they continued into the Baja desert.  At this point they had already gained the physical lead in the race, passing the Naturally Aspirated Class, Class 12 cars, and in the process of passing the Pro Turbo cars.

Soon Matlock and Eddie found themselves in a huge dry lake bed that was over 60 miles long.  “That’s where I was most nervous, I figured the turbo cars were going to eat me alive!”  She joked.  She had every reason to believe she would be passed during this section, as her car hits 75MPH, while the turbo class reaches just under 100MPH.  That didn’t seem to phase her and Eddie one bit, as she flew through the lake bed.  Helicopter footage shows Matlock flying by cars that should be faster than hers, which goes to show her level of skill and driving.

As the race continued on Matlock remained focused keeping up her incredible time.  She soon came to a very dusty section at RM300, and in such low visibility hit a large rock at high speed forcing them to stop and change out a tire.  Ironically the only person ahead of her was her husband, Wayne Matlock, also a Polaris Factory Driver.  At this point Wayne was forced off the course with a broken Upper Control Arm.  Knowing Kristen was approaching fast, he radioed to her to NOT stop for him, and to keep going strong.  She did exactly that, as she flew by her husband acknowledging his thumbs up.  Wayne eventually took 3rd in his class, and 4th overall which is still incredible.

At RM382 Kristen took the absolute physical lead even with adjusted time since she started from the back of the pack.  At that point she slowed down, and drove smart.  “I wanted to preserve the car, so that’s what I did.”  She explained, knowing that she is doing very well at this point.  When she crossed the finish line the next car behind her (Pro Turbo car) which was second overall, was 19 minutes behind her.  When the race was over, she finished 3 hours ahead of second place in her class.

This is Kristen’s 5th year racing professionally for Polaris RZR, having raced ATV’s for 10 years in the BITD series. Her next challenge is to battle the 2020 Baja 1000.  She will be driving the same car she drove in the 500, with the option to start first.  As we mentioned previously, she prefers to start in the back, but has yet to decide where she’d like to start in the 1000.  Her husband Wayne can choose to start 3rd as well, but is also yet to decide his starting position.  It sure is great to have the options though!  “The race is going to be a true 1000 miles this year so it’s anyone’s race, I just like to know where I’m at”, she reiterated her reasons for typically requesting a rear start.

Another huge announcement for the sport came recently as well, as Kristen & Wayne Matlock and Craig Scanlon were just announced as the factory Polaris RZR team to battle the 2021 Dakar race in Saudi Arabia.  3 drivers, 3 cars, 1 team, it should be a great one!  Max Eddy Jr. will once again copilot, with Kristen as he does have previous Dakar experience.

Both Kristen and Wayne Matlock are also huge supporters of those battling breast cancer.  She is happy to support such a great cause teaming with DirtCo.com  The pink socks can be purchased on their website, with $5.00 of each pair going back to the Keep a Breast Foundation.

Grab a pair, and support here