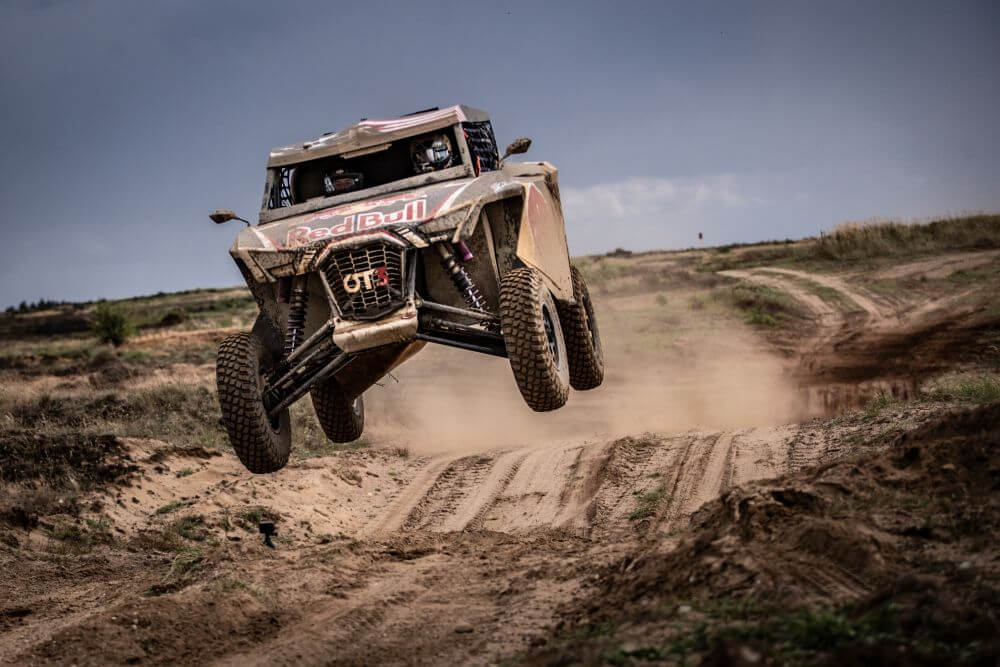 A four-stage dash across southern Spain has put the Red Bull Desert Wings in top gear ahead of the 2021 Dakar Rally. Following the frantic high-speed action at the Andalucía Rally it’s evident that the world’s premier off-roaders are back on the pace and already focused on their next trip to Saudi Arabia.

The car contest at the Andalucía Rally promised to deliver a heavyweight clash of off-road driving talent and it never disappointed. Even after crossing 1,000 kilometres of perilous terrain in southern Spain, the leading cars were still trading blows right up to the finish line.

Coming out on top was three-time Dakar winner Nasser Al-Attiyah (QAT) behind the wheel of his Toyota Hilux. Podium finishes on all four stages – as well as a decisive stage win on day two – put the Qatari in front of his rivals.

“We tested a lot of things that will help us at the next Dakar. Now we’re looking forward to the Dakar where our aim will be to win.” – Nasser Al-Attiyah

Second place went to Carlos Sainz (ESP) who finished the rally in his native Spain with a stage win on the 220-kilometre final day. Third placed Yazeed Al-Rajhi (KSA) was followed home by 13-time Dakar champion Stéphane Peterhansel (FRA). All these candidates for victory at the 2021 Dakar showed that they still have what it takes to push for rally-raid’s biggest prize.

“We got a lot of answers here that we needed before we go to the next Dakar.” – Carlos Sainz

The accelerated learning curve of the Red Bull Off-Read Junior Team continued in Spain as the three drivers with an average age of just 21 grew in confidence as the rally progressed. This confidence was underlined by Mitch Guthrie Jr. (USA) winning the final side-by-side (SxS) stage to take third overall in the category.

“This feels like a really important learning experience for the next Dakar.” – Mitch Guthrie Jr.

Kevin Hansen (SWE) and Seth Quintero (USA) will also take plenty of positives away from their first-ever rally-raid contest. Rallycross star Hansen impressed the team with his consistency as he took his OT3 to fourth overall.

“Today we had a really, really good stage. We really tried to push in the beginning and catch some speed. We had one tricky moment with the navigation but overall we kept up a great rhythm.” – Kevin Hansen

18-year-old Quintero showed incredible mental resilience to battle back from a tough start in Spain and end with a podium finish on stage four.

“We’re sitting third and that’s great considering how our rally started. I’m really looking forward to the next rally that we do.” – Seth Quintero

In the bike race the overall win was claimed by Kevin Benavides (ARG) on his Honda. The Dakar winning members of the Red Bull KTM Factory Team kept on the pace throughout the rally with Toby Price (AUS) the best placed of the bunch in fourth overall. Two-time Dakar champion Price put his focus on regaining the feel of racing ahead of his trip to Saudi Arabia next year.

“Now we’re going to do more training and get organised for January.” – Toby Price

2018 Dakar winner Matthias Walkner (AUT) bagged sixth place while the Andalucía Rally finished on a massive high for rookie Daniel Sanders (AUS) who took the stage win on the final day in Spain. Also getting in plenty of hours in the saddle in Spain was India’s top off-roader CS Santosh (IND).

“I thought I might be on my way to a Top 5 result and then at the finish line they told me I was number one. That was pretty awesome.” – Daniel Sanders

2017 Dakar winner Sam Sunderland (GBR) joined top female rider Laia Sanz (ESP) in retiring during the opening days of the rally due to injuries caused by crashing on the route. Both Sunderland and Sanz are confident they’ll be back to full fitness before the start of the 2021 Dakar next January.

The upcoming Dakar, the second to be hosted by Saudi Arabia, now becomes the full focus of all the off-roaders and the teams that paid a visit to Andalucía. Machines will be further tuned and athletes will undergo strict fitness regimes as the January 3 start date of the next Dakar looms on the horizon.