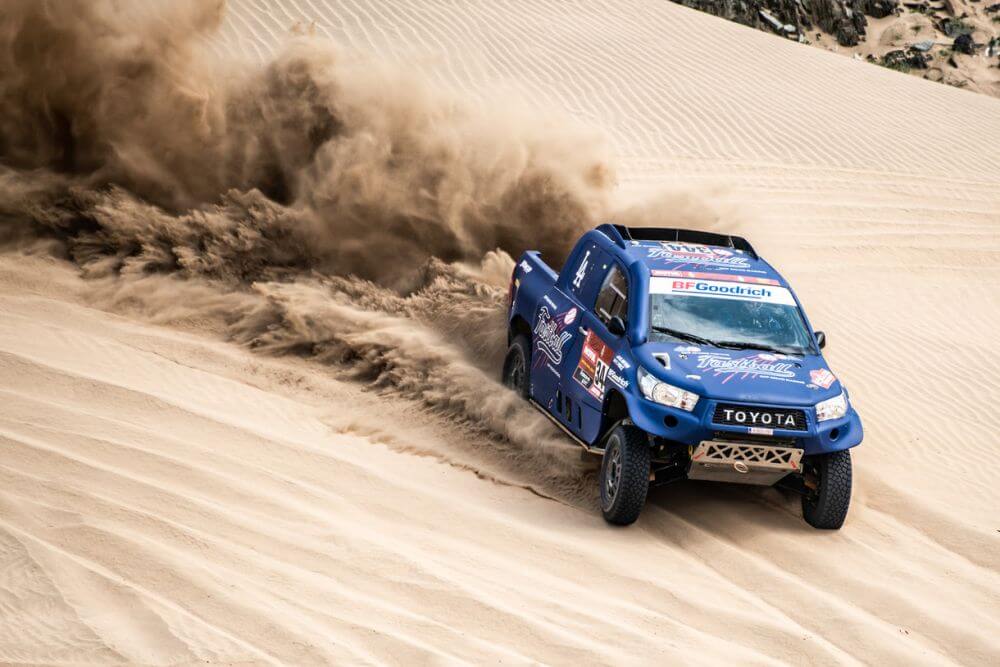 Dodger’s owner Bobby Patton has been bitten by the off-road racing bug. Bitten hard. In 2017 he raced the Baja 1000 for the first time, piloting a vintage Land Cruiser to victory for the 50th anniversary of the event. In 2019 he finished every mile of every SCORE International desert race as driver of record in his No. 240 Jimco-built Fastball Racing Spec Trophy Truck to earn the coveted Rod Hall SCORE Milestone Award, a distinction bestowed upon only 46 other SCORE series racers competing in 18 different classes. Covering 2,025 miles in a season is impressive and has helped prepare Patton for his biggest challenge yet: the Dakar Rally.

“Dakar is definitely a bucket list event,” Patton confessed recently. Of course, 2,025 miles doesn’t get you to the finish line of the world’s most grueling rally raid event, which starts on January 4th in Jeddah, Saudi Arabia. The route of the first edition of the Dakar in Saudi Arabia will cover a total of 4,460 miles, including 3,100 miles of specials. For those unfamiliar with the rally raid format, the event consists of timed “Special Stages” and unscored “Liaisons” between the specials over the course of two weeks. Unlike Baja racing, there is no prerunning, GPS is forbidden, and the same driver and navigator have to complete the entire event.

Bobby Patton will have veteran off-road racer Robbie Pierce by his side. As owner of Jimco Racing, Pierce has played a key role in getting Patton to the finish line in Baja and is intent on doing the same at the Dakar Rally. Not only a successful businessman, Pierce has his own racing pedigree, piloting everything from short course trucks to his current Jimco Trophy Truck. Pierce was named SCORE International’s 2010 Person of the Year and finished in the Top Ten overall at the 2019 Baja 1000. “I couldn’t be more excited to race amongst the giants at Dakar,” Pierce revealed. “And there is no one I would rather be here with than Bobby. Whether it is business or racing, he simply never gives up.”

The two will be piloting a Toyota Hilux prepared and supported by the Overdrive team of Belgium. This makes Patton and Pierce teammates with heavyweights like Nasser Al-Attiyah and Bernhard Ten Brinke, which will certainly help with the steep learning curve of Dakar. The 4×4 Hilux features the same Lexus 5.0L V8 engine that propelled Al-Attiyah to victory last year. And now it is backed by a Sadev six speed sequential gearbox to transfer power to the BFGoodrich tires even more efficiently. Overdrive Director Jean-Marc Fortin has decades of experience in all facets of rally raid, giving the American competitors every advantage at their inaugural Dakar Rally.

The playing field will be somewhat levelled for Patton and Pierce this year anyway, since this is the first running of the Dakar Rally in Saudi Arabia. The Dakar Rally was first run from Paris to the Senegal capital of Dakar in 1978, the vision of rally founder Thierry Sabine. In 2008 the event was cancelled due to security concerns, and the next year it moved to South America. This year the Dakar Rally moves to Saudi Arabia, where shorter liaisons and more off piste navigation (no roads) are certain to challenge the field of cars, trucks, bikes, quads, and UTVs. “While this is my first year competing in Dakar, no one has ran the event in Saudi Arabia before,” Patton noted. “This year is going to be a fact-finding mission for all the competitors, not just Robbie and I.” You can follow the progress of Fastball Racing’s Car 344 online daily at Dakar.com and on social media using the hashtags: #FastballRacing #FastballDakar2020 #DodgerBlue #JimcoBlue #BuiltonBFG