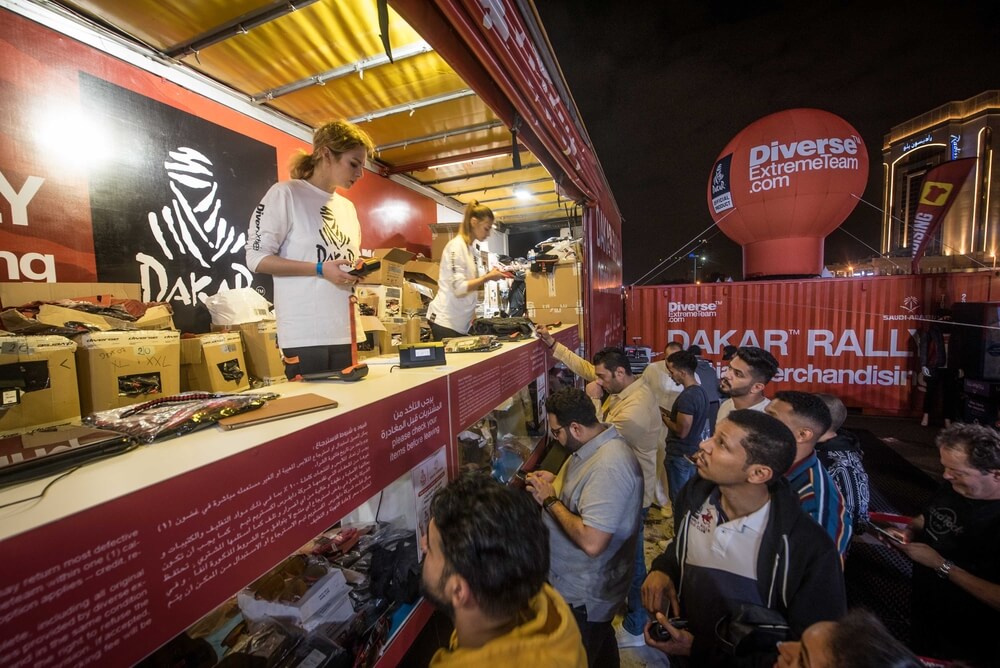 THE MOOD HEATS UP AMONG THE CHAMPIONS

The double stage set up in one of the Jeddah Hilton hotel’s grand lounges was brimming with champions! The four tittle holders, namely Toby Price in the bike category, Nasser Al Attiyah for the cars, Eduard Nikolaev behind the wheel of a truck and Francisco “Chaleco” López for the SSVs, accompanied amongst others by Stéphane Peterhansel, Nani Roma and Carlos Sainz, accounted for a total of 27 trophies and were able to give their thoughts about what awaits them in Saudi Arabia, with a unanimous feeling of excitement at discovering a new desert. Present this year as a next-door neighbour, the Qatari driver is delighted to see the Dakar set up camp in the Middle East: “When I started taking part in the rally fifteen years ago, I could not have dreamed that I would find myself here as title holder and even as a favourite”. However, if his Toyota team-mate Saudi driver Yazeed Al Rajhi, 6th last year, has his way, Al Attiyah’s status as favourite will be hotly contested: “The attitude is win or bust,” he declared in a rather cheeky provocative manner. Exchanges of pleasantries were also the order of the day for the Spanish clan, with Carlos Sainz stating that he felt, “still just as enthusiastic and competitive as ever,” whilst two-time Formula 1 champion Fernando Alonso, the most intently awaited rookie on the rally, gently reminded his countryman that, “after having raced against Carlos Sainz junior I’ll now find myself up against Carlos Sainz senior!” From Sunday onwards, the jousting will move on to the tracks.

RICKY BRABEC: “THE GOAL RIGHT NOW WOULD BE TO FINISH”

This year, Team Honda will again be a rival capable of bringing KTM’s domination of the Dakar to a close. Last year, Ricky Brabec appeared to be a credible pretender to the crown, occupying the lead for several days and even thinking of becoming the first American to win the rally… before his exit from the race on the 8th stage. Having got over his frustration, the rider arrived with a new streamlined haircut before putting his helmet on to race, but still remains measured regarding his ambitions: “The last Dakar was a bit of struggle on stage eight when I retired. It took a long time to get over that emotionally and mentally. But we’re back here now and hopefully we can fight to the end and have a good result. It was a really good Dakar for me. I was really stoked and having fun leading and possibly being one of the first Americans to come home and win the thing. Unfortunately disaster struck, so hopefully we can redeem ourselves here in Saudi Arabia. The goal will always be the same until it’s done, but the goal right now would be to finish the Dakar. It’s Saudi Arabia and it will be a little bit difficult. We’ll have these marathon stages where we can’t change wheels, so it’s going to be tough. There will be long stages and it will be hot. I’m not sure how the bivouacs are going to be yet, because we haven’t been here, so hopefully it will be good. Riding motorcycles is fun so I don’t think of it as being hard, but the stages are long, so it’s going to be hard on the motorcycles, hard on the body, hard on the mind and it’s going to be hard to take in the calories and carbs that our body needs while we’re racing all day. So hopefully we can overcome that and adapt and overcome the situations and come out on top”.

DAVID CASTERA: “YOU HAVE TO ASK YOURSELVES THE RIGHT QUESTIONS”

There is only one opportunity to gather together all the riders, drivers and co-pilots on the Dakar, bearing in mind that the first stage systematically witnesses the first exits from the race. It is the general briefing during which the Dakar Director dispenses his final instructions to the competitors. David Castera did the honours, after having given the floor to the youngest competitor, Dutchman Mitchell Van den Brink (17 years old, co-piloting a truck), accompanied by the eldest, Jean-Pierre Strugo, and Carlos Sainz, to read the charter of good behaviour to which the entire race caravan is duty bound. With the desire of preserving the values of the rally-raid discipline, Castera has made alterations to the regulations, reasserting the fact that the Dakar’s criteria of excellence remain “speed, endurance and navigation”. The reconnoitring carried out and the route choices made for the 42nd edition promise to produce a particularly demanding race as regards the latter aspect: “We are not trying to trick you, but in Saudi Arabia, there are thousands of tracks and crossroads, so you have to ask yourselves the right questions”. The competitors have been warned.

A FAMILY AFFAIR FOR THE PLAZAS FROM A VERY EARLY AGE!

The Dakar is a family affair for the Plazas. Manuel took part in his first Dakar in 1996 when he was a young father to Monica, born several months before. Several years later, the driver from Cuenca who had already caught the Dakar bug was in Mauritania when Monica’s little sister Marta was born. It is probably not down to chance that the two children who are now young women have become involved in driving and co-piloting all-terrain vehicles, among other activities. When their father decided to make his return after a 12 year absence on learning of the Dakar’s new destination, it was a logical choice for him to turn to Monica in his search for a co-pilot: “It’s very moving for me to return here after a such a long break from the race, especially in the company of my daughter. I feel like it’s the first time I’m participating all over again”. His daughter, the youngest competitor in the car category, is just as enthusiastic and remembers having grown up in the atmosphere of motorsport competition from a very tender age: “I always watched the Dakar on the television to try and see my Dad. A long time afterwards, five years ago, I took part in my first race as a co-pilot and I was terrified because I didn’t know a single thing about road-books and navigation. Now, though, I’ve got more experience but I’m still anxious because it’s the Dakar”.