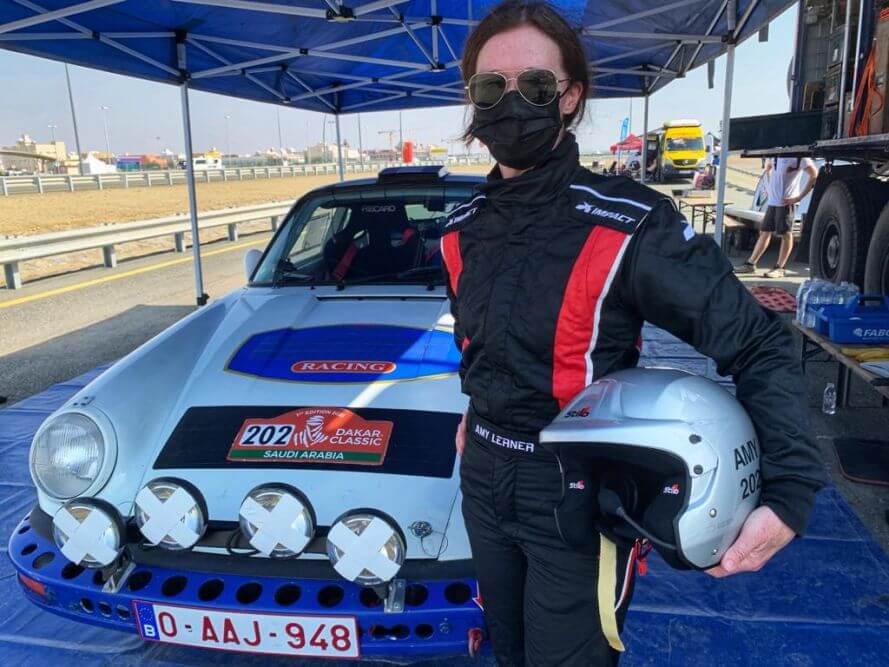 “The course was insanely beautiful today. At times, it was like surfing on sand, with emerald dust, and carving in and out of rock formations in places that have barely seen humans.” Amy Lerner: 2021 Dakar Rally, Stage 5, Saudi Arabia.

By Sue Mead
When Amy Lerner, her sister Tricia Reina, and Shelby Hall entered the 2018 MINT 400 in a Polaris RZR 1000, they thought it would be humorous to play up the image that some have of UTV s as “golf carts”. The trio dressed in golf-wear for the MINT 400 Parade and team mechanic Alex Baker donned caddy’s clothing. While that was in jest, the trio took their participation in “The Great American Off-Road Race” seriously once the race began and they each traded driving duties in RZR’s left seat, placing 5th in their SXS class. For Lerner and Shelby Hall, this was their second ‘MINT’, having competed together in 2017 in Rod Hall’s legendary ’68 Bronco, when they achieved a 2nd-place finish.

The next time Lerner sat in a race seat was in this year’s 2021 Dakar Rally and, although she thoroughly enjoyed the 5,000-mile-long competition, it was momentous and a significant achievement not only to finish the longest, most arduous off-road race on the planet, but to simply get to the starting line in Jeddah, Saudi Arabia. She placed 2nd in her class and 15th overall in the all-new Classic Class.

It was a laudable achievement! The 55-year-old racer, who has competed in four Gazelle Rallies in Morocco and the Australasian Safari Rally in Australia, signed up only two weeks before the 2021 Dakar registration closed last October and, in that short time, she put together Team AL Rally.
Lerner purchased a 1982 Porsche 911 SC race car that was stored in a garage in Belgium and was paired with a Mercedes-Benz 4 x 4 assistance truck and two experienced mechanics. Next, she tapped architect and friend Sara Bossaert, from Barcelona, Spain, to be her co-driver; Bossaert had sea-going experience as a competitive navigational sailor, but none in finding her way in seas of sand! And, she had never participated in any type of off-roading or motorsports. American automotive journalist Sue Mead, who has competed in the Dakar and is an inductee to the Off Road Motorsports Hall of Fame, was added as media manager and Dakar veteran Judith Tomaselli, of France, signed on as team manager.

Lerner’s first “race against the clock” was to set up the historic, desert-prepped Porsche with Recaro race seats; source the right fitment of BFG tires from Europe; order race suits, helmets, race radios and Maxtrax recovery tracks, along with extra tools and spare parts for the 911, plus collect gear and goods for the team’s 20 days on the ground in Saudi Arabia—and, then, to get the three team vehicles (including a motorhome) on the “Dakar boat” that left the port of Marseille, France, on Nov. 30 for Jeddah. Making sure that all six team members were COVID-free and adhering to Dakar’s strict rules for pre-testing and participation during the pandemic was also a challenge, but Lerner was motivated.
Dakar had been on Lerner’s “dreams list” for seven years, especially since winning Overall Production and the Dakar Challenge at the 2013 Australasian Safari Rally; the prize was a free entry for 2014 Dakar, but it came with a timeframe that Lerner couldn’t meet. However, it was the announcement of an all-new Classic Class that was the siren song for the mother of two, who multitasks in a variety of entrepreneurial endeavors in her daily life that include ventures in finance, real estate and documentary film-making. Her movie One More Win, that chronicles the life and legacy of famed off-road racer Rod Hall, has garnered international recognition and won a number of trailer awards, a second-place audience award at the Breck Film Festival, and a collection of other awards.
“I grew up loving antique cars, like Model Ts and Woody Wagons, and worked with my Dad from a young age on his collection of vintage vehicles,” explains Lerner, who only knew a bit about the Dakar when she was young. “Growing up in the U.S., the Dakar didn’t receive as much coverage as it did in other locations around the world. However, when I saw a story in the New York Times about the Ralleye Aicha Gazelles in 2008, it made me want to do it– and so I did! It was in my preparation for the Gazelle Rally that I met and trained with Rod Hall—and that was life-changing.” In addition to Baja racing and other international competitions, Hall had competed in the Dakar.

Although Lerner had raced 4WD Jeeps with automatic transmissions, when she found the vintage 3.0-liter 911 SC with modified suspension, larger fuel tank and enhanced safety equipment, she was hooked. She had owned two 911 models–a ’93 and ’94– and had always regretted selling them, but she had also stored images in her grey matter from when F1 racer Jacky Ickx and Rene Metge led a team of Porsches through Africa in the 1984 and 1986 Dakars– and won. She fell for the beauty and history of the rear-drive 911, with its 5-speed manual prepared by Henrard Racing as a tribute to Ickx, plus it came with an impressive pedigree of having competed successfully in three desert races, including Stephane Henrard’s victory in the Dakar Classic in 2013. She had no idea that it would also go on to become the ‘belle of the ball’ at this year’s Dakar and receive global notoriety that would reach millions upon millions through TV, radio, social media and some of the world’s largest and most prestigious automotive and sports publications.

When Lerner arrived in Saudi Arabia for 12 days of competition on a course through the desert sands and rock-littered tracks of this Arab land’s backcountry, she had no opportunity to even see her race car before arriving in Saudi Arabia—nor to test it—but climbed into the left seat for the 20-kilometer-long Prologue, the day before she began her 5,000-mile-long off-road challenge. While the terrain of the Classic Class was not as rigorous as the main course, as it bypassed massive dunes and the toughest tracks chosen for vehicles with more horsepower, taller suspension and modern-day AWD and traction technologies, the 26 competitors in the regularity rally had the added tasks associated with a time/speed/distance rally imposed over a wide variety of off-road topography.

“The Classic Class ran on a parallel course to the main rally,” said Lerner, “and was only for vehicles that were built prior to the year 2000 and that had either raced in rallies previously or a model that raced back in the ’80s or ’90s.” These vehicles shared some of the same starting and ending points and the same bivouacs at the rally each day and also required the same challenge for the drivers and co-pilots to find the mental and physical endurance that all other Dakar competitors faced, plus, they faced the added ardors of motoring in older and sometimes less dependable models, without spare parts at-the-ready-— exactly what drew Lerner and other vintage rally buffs to this year’s event.
Lerner’s aspiration was simple. “My goal was for Sara and me to improve each day; for our experienced mechanics, Ulysse and Marc, to keep the car running strong; and to simply finish this epic rally.” Despite the learning curve to motor a rear-drive race car with manual gears over steep and varied off-road terrain with hazards, Lerner’s competence grew greater each stage of the rally, as did the navigating skills of Bossaert. Even before their strong finish, the duo had begun their plans to return for the 2022 Dakar Rally!
Image courtesy of Amaury Sport Organization