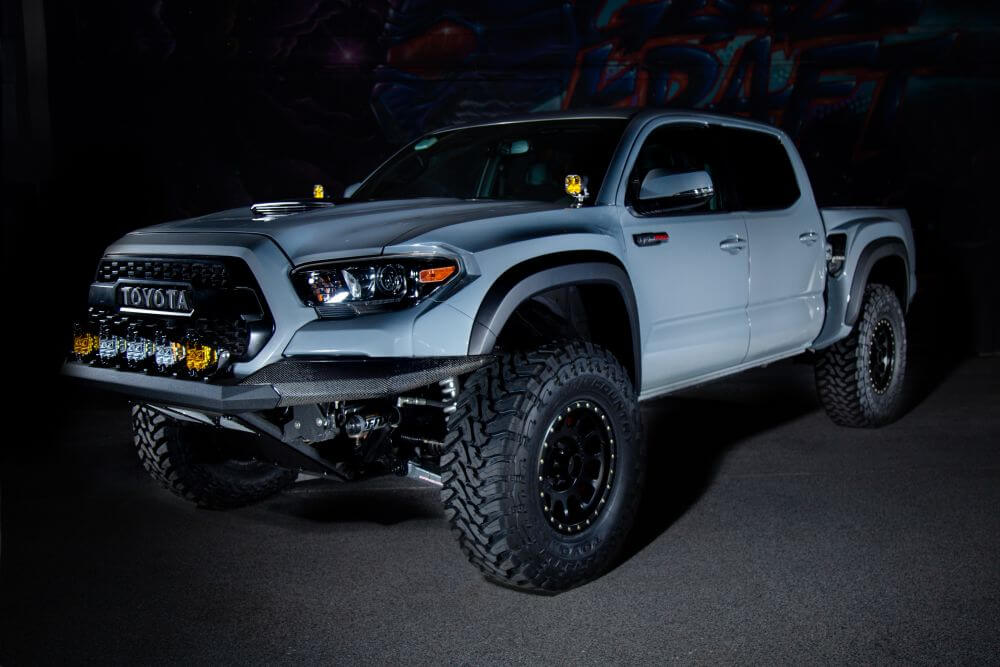 So you walk into a dealership wanting to buy a new truck, but after 5 minutes you realize that everyone is driving the same exact thing. You buy your favorite truck, knowing you won’t keep it stock then head home and immediately begin drafting up what you want to do first.

Auto racing culture has given every car enthusiast the inspiration to turn their daily commuter vehicles into custom one of a kind fuel burning machines. So you really didn’t just buy a truck, you’re buying into a 70+ year culture that was started after the second World War, when soldiers returned home and began customizing their cars, bikes and anything with a motor. What began as a way to reject society’s “norm”, soon turned into a pop culture explosion. Depending on one’s customization taste, many enthusiasts strive to make their ride special and faster, one that turns heads, or something that can be heard blocks away.

We present to you the GK-Wolf.  A race inspired Toyota Tacoma daily commuter built by Glazzkraft. A San Diego based company deeply rooted in Baja racing ran by Hector Jimenez who has been not only producing fiberglass products, but also building some of the coolest UTVs since 2008.

Their idea was to build a truck capable of getting you to work early, or chasing a race team through the rugged Mexican desert with the same comfort on both concrete and dirt. It features wide body fender/bedside panels designed to handle highway speeds as well as rough terrain. These panels will also give 3.5 inches of space for the huge 35” ToyoTires open country MT Tires mounted on 17” 305 Method Race Wheels.

One of our favorite parts of this bolt-on build is definitely the ROLLOFACE calipers custom built for the GK-Wolf.  One of those products your average person might not notice, but any enthusiast will.

The cherry on top has to be the bumpers. Built in-house, half steel half carbon fiber to keep things light but still pretty durable. Hector’s experience from building the G.O.A.T. Rob MacCachren’s & Rodrigo Ampudia’s Short course Bodies helped him with the decision of fabricating one of the lightest and strongest bumpers on the market, equipped with 5 Baja Design LP-4’s turning nighttime to daylight.

It’s safe to say that Glazzkraft is making a big stride in getting out of their comfort zone and into deeper waters. For the longest time there has only been minimal options when shopping for fiberglass, having another option out there just shows that our off-road culture is an ever evolving monster continuing to dominate the aftermarket world.

See full specs of this well built Taco below: