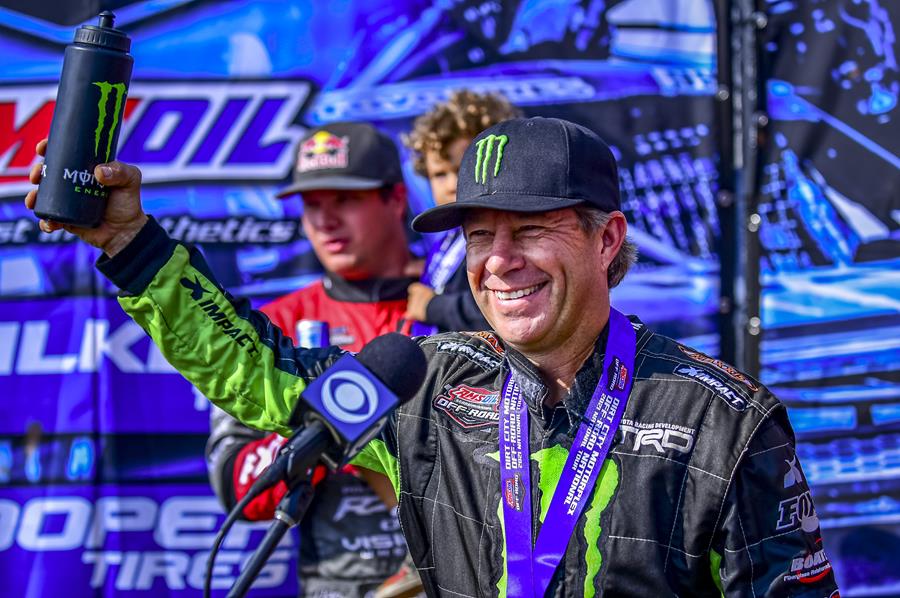 Legend Makes History at Dirt City as Pro’s Get Double

Lena, Wis. ~ Rain interrupted round seven of AMSOIL Championship Off-Road on Saturday. A deluge at the end of the day made for unsafe conditions, forcing the Pro 2 and Pro 4 classes to pull off the daily double with two races.

With the track dried out and ready for the rumble of 800-horsepower, the fans flocked back into the Dirt City Motorplex with an early morning wake-up call. Instead of a strong cup of coffee to get them going on Sunday, they opted for the smell of race fuel and screams of finely-tuned off-road trucks. And instead of reading about history in their morning paper, they were witness to a milestone by one of the sports greats.

Pro 4: Round Seven Sees Johnny Greaves Hit 100
It’s without a doubt that Johnny Greaves has put together a Hall of Fame career. He has carried the torch for short-course racing in the Midwest for the past 25-years. On Sunday, the elder statesman of off-road racing hit a major milestone by winning his 100th career Pro 4 race.

It was vintage Greaves. He led the race from the get-go but fell back after an incident with a tire that was marking the inside corner of a 180-degree turn. But in true Johnny Greaves fashion, he put his head down, got back into the race and found his way into contention. When CJ Greaves slowed on the last lap, Johnny was back in position to take home the win and hit the century mark in the process. 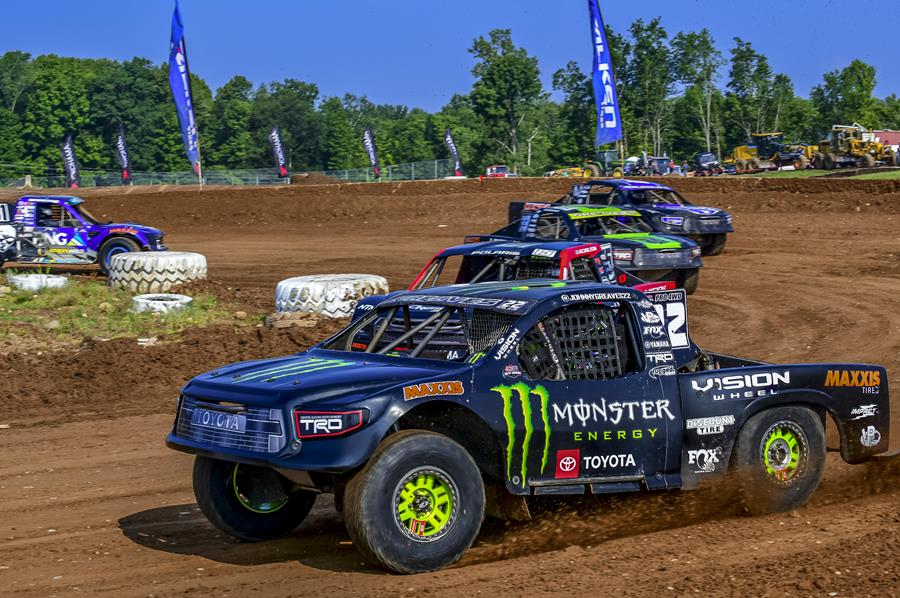 “As far as the 100th win, I gotta admit I’m not a counter, I didn’t even know that (was a thing),” said Greaves. “I probably would have made more mistakes if I did know. It wasn’t a pretty win. I just kept going forward and I know there’s a lot of people making mistakes and you know I was there in the end. I got to put this out to my crew. They work so hard and my daughter Jessica, who just had a baby, Jackson. You guys got beat by a grandpa!”

Andrew Carlson was also in position to capitalize at the end of the race. After leading the first lap, he dropped down to sixth, but rallied up to second with two laps to go. He and Greaves were joined on the podium by Kyle Chaney, who started well, but was shuffled back to eighth before putting a charge to get back into the fray for his first podium of the season. 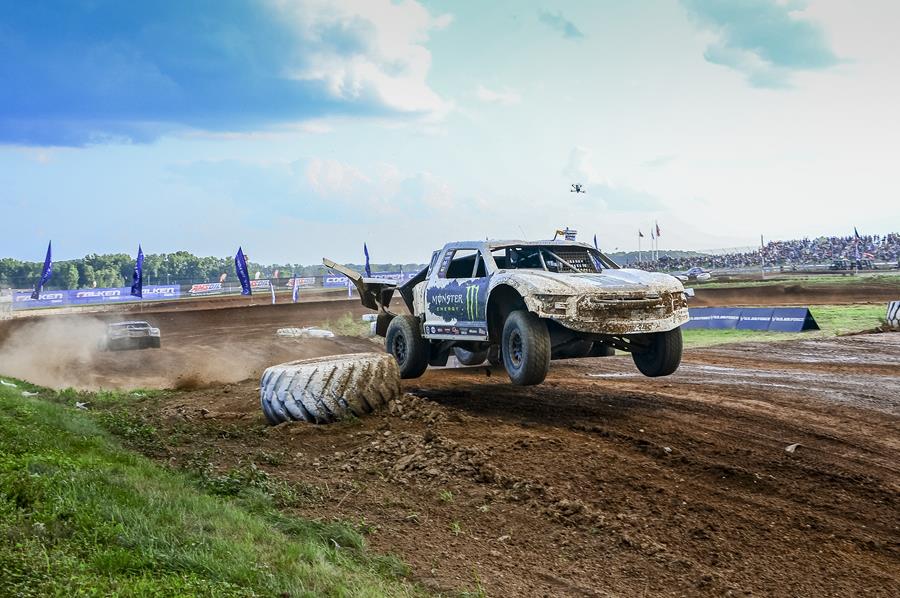 Andrew Carlson got the early lead, but like a lot of competitors at Dirt City, the track was not very kind as Carlson hit one of the growing ruts and flipped. That put Doug Mittag and CJ Greaves into a battle for the lead.

LeDuc was shuffled to as far back as seventh off the start but was patient as he maneuvered through the field and went door-to-door with Greaves. Both drivers were battling each other while trying to keep Mittag in check. It would stay that way until the last lap when Mittag slowed and LeDuc found an opening and rushed past and into the lead. Greaves was right there with him at the end, but LeDuc was in position to take the win by just 0.284. 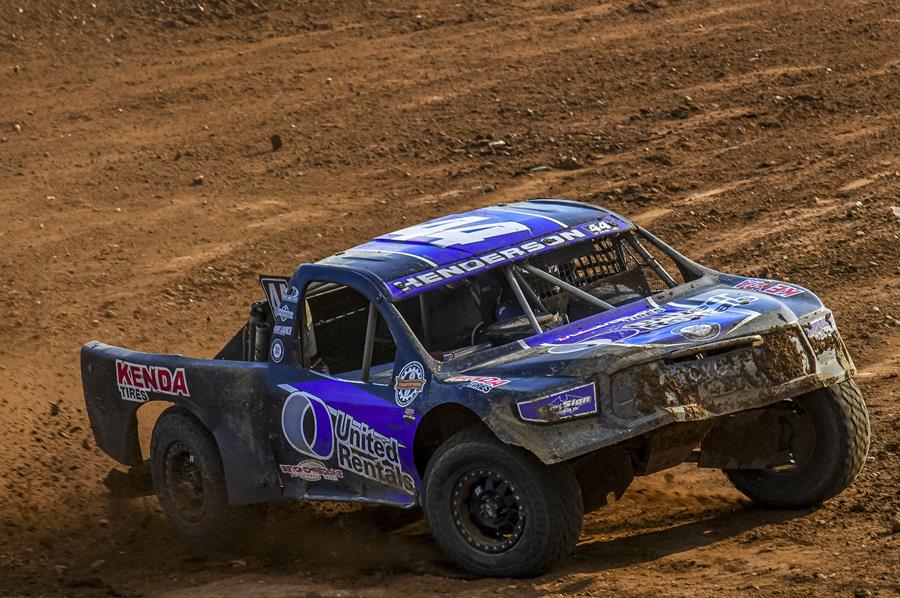 Jimmy Henderson worked his way into the final podium spot after dropping down to fifth. It marked Henderson’s, who has been close to busting through all season, first podium of the season. 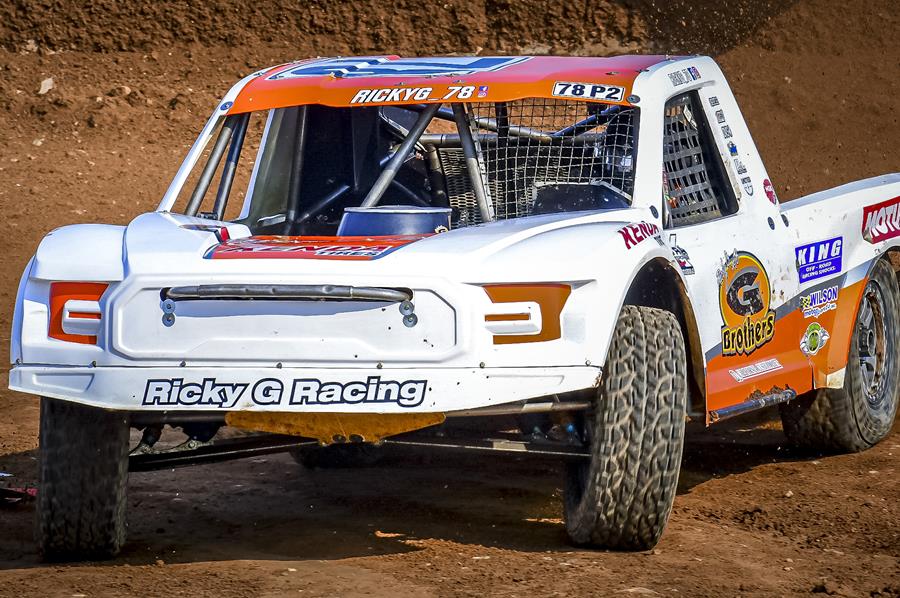 PRO 2: Round 7 Goes to Ricky G
Ricky Gutierrez was a rocket-ship on Sunday morning as the Pro 2’s lined up early, ready for an intense battle to start the day’s racing.

Gutierrez used an amazing start and the ability to hold off an equally fast Jerett Brooks for the entire race to pick up his first win of the season. It also marked the third straight podium for Gutierrez, who has used a mid-season surge to jump into the top five overall.

Brooks finished just .388 behind the race winner. It was a great bounce-back for Brooks, who struggled at ERX, but would eventually pick up a pair of podiums in Lena. Cory Winner rounded out the podium as he crossed the line right behind Brooks. 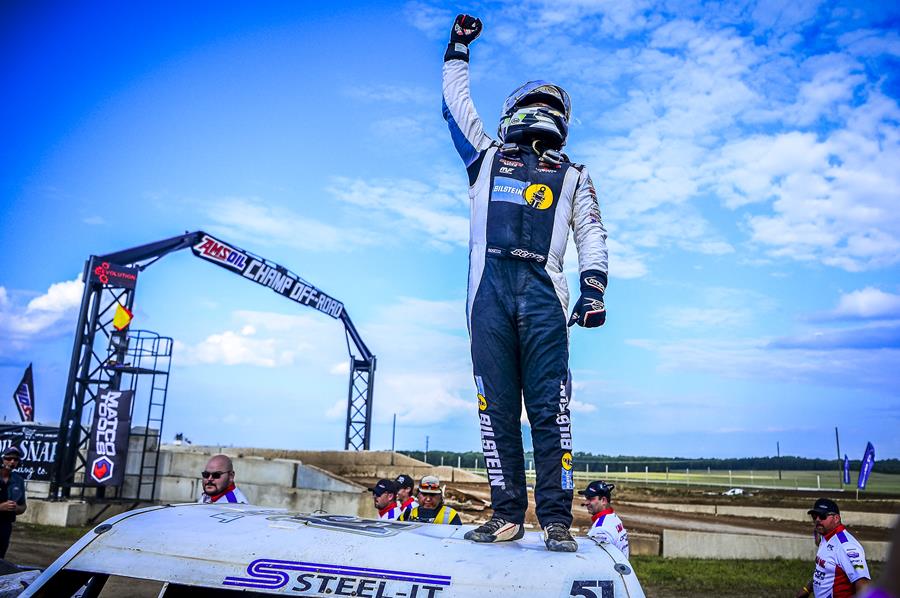 PRO 2: Round 8 Hit the Beat
Ryan Beat made the right adjustments after Sunday morning’s race as he was in complete control of the afternoon’s Pro 2 showdown. Beat lead from start-to-finish in round eight and found ways to pull from the field on every lap. With the win, Beat leaves Dirt City with the overall points lead.

Brooks looked like he was going to challenge Beat early on, but a spin-out pushed him back. That, along with an incredible run after a last place start by Keegan Kincaid would only allow Brooks to get back into third after a last lap pass for the position.

Kincaid, meanwhile, righted the ship quickly in the afternoon session. After starting on the back row, Kincaid went from 16th to third with six laps to go. He got into second place with two left and held on for his first podium since his round three win. 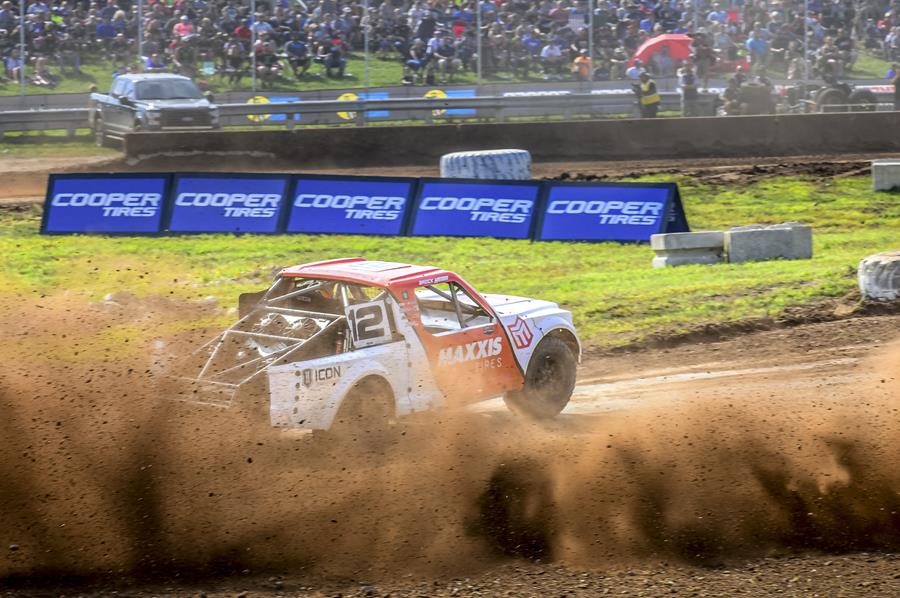 Mamer’s Misfortune Helps Heger with Sixth Win
Brock Heger did everything he could to get the lead early in the race. For the first seven laps in Pro Lite, Heger couldn’t find his way past Madix Bailey. Then, off the restart, Cole Mamer sling-shotted around Heger and Bailey for the lead.

After that, Mamer looked unstoppable and Heger started seeing smoke coming from his truck. But Mamer kept pushing, even as Heger slowed. But with just three turns left, it was Mamer’s truck that went up in smoke and forced the leader out of the race. Heger took advantage, moving into the lead and notching his sixth win of the season. 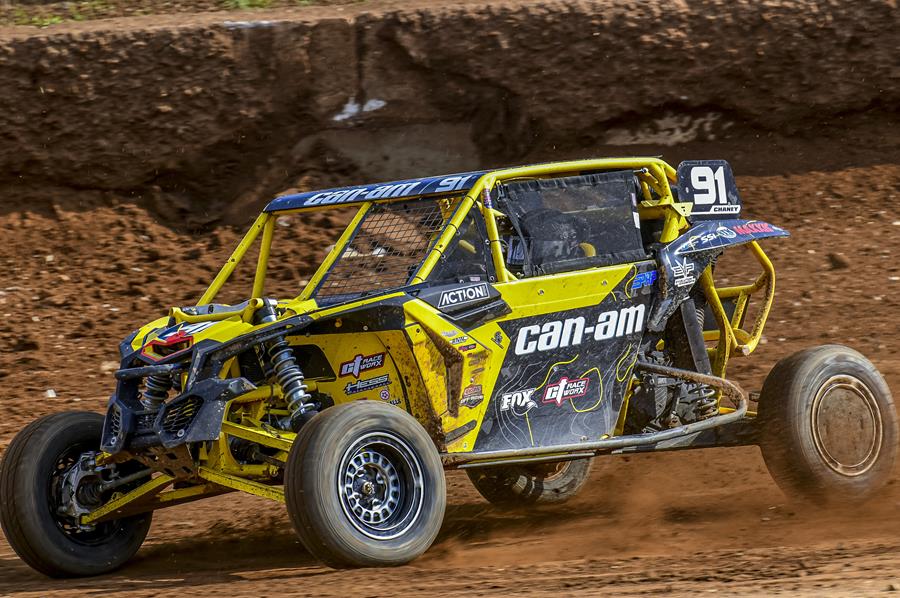 Chaney Claims Pro Mod SXS Victory
Kyle Chaney’s team rewired his Pro Mod SXS after Saturday’s early departure. It seems they found whatever was wrong because Chaney was on a rail on Sunday. He blasted off the start and was pulling away from the field more and more with every passing lap. It marked Chaney’s (Can AM) second win of the season, but his first podium finish since that round two victory.

Rodney VanEperen (Yamaha) tried to close the gap on Chaney several times but was unsuccessful in his bid for his third win of the year. While he took home second, Andrew Carlson (Polaris) nabbed valuable championship points as the current overall leader finished third. 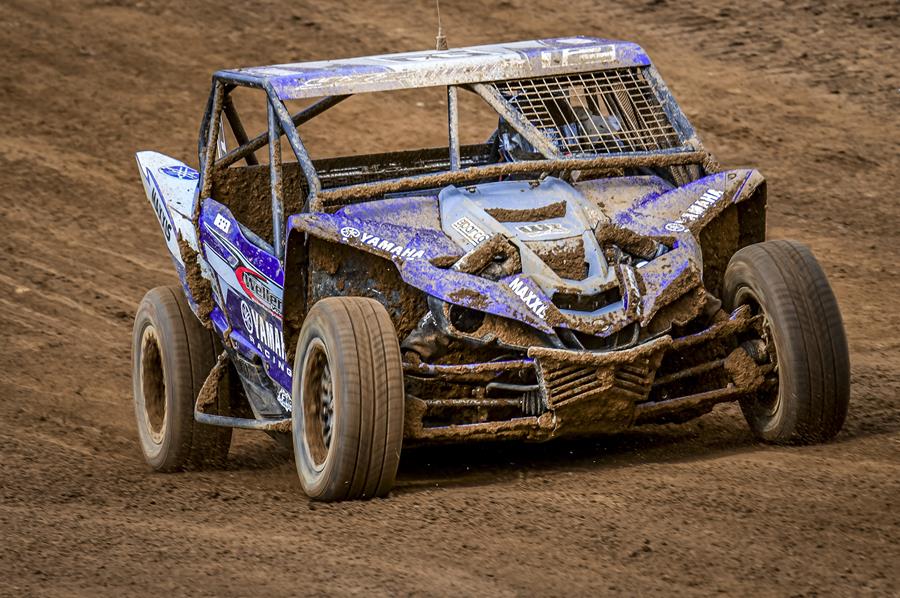 The Pro Stock race was full of chaos, but Heger was able to steer clear of the carnage and pick up the win. Jeremy Houle (Arctic Cat) had his best race of the season, running all race long with the race leaders before finishing second. Johnny Holtger finished third.

PRO BUGGY: It’s now six wins on the season for Pro Buggy’s Michael Meister. The points leader made it four in a row and a weekend sweep at Dirt City on Sunday, leading every lap but one for the win. Mark Steinhardt finished second and Michael Hester came across the line in third, just getting the final spot by 0.198 of a second.

PRO AM SXS: Chase Kleist capped off a solid weekend of racing by winning the Pro AM SXS race on Sunday. Kleist held off the points leader, Dylan Marquardt, for his first win of the season. Marquardt extended his points lead by finishing second, one spot ahead of Jake Kosmecki, who’s third place finish puts him second overall. 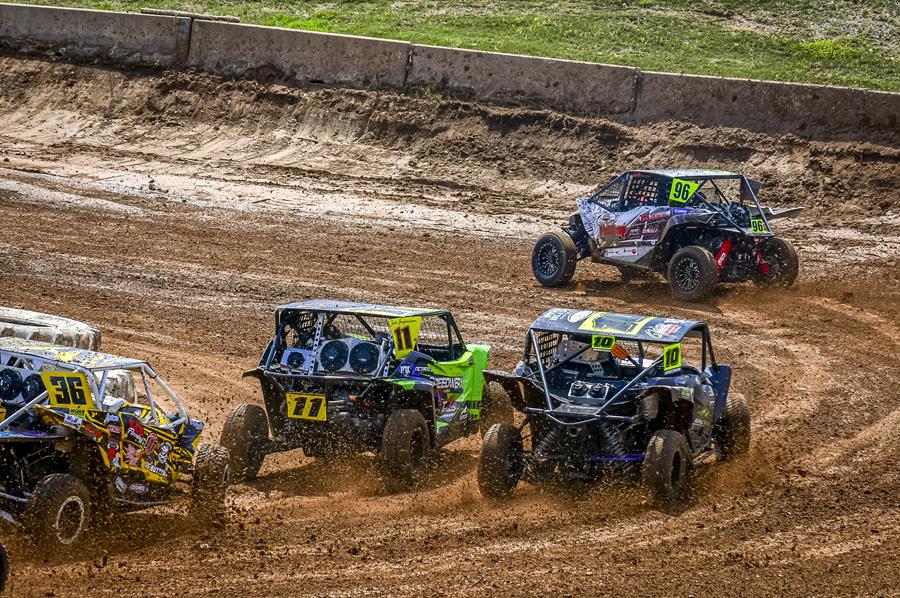 SPORTSMAN SXS: The battle for Sportsman SXS supremacy this season is getting tight, especially after Derek Tilkens found his winning touch again. Tilkens won for the fourth time on Sunday, but the first since round three. With points leader Colin Kernz coming in second, Tilkens was able to close the gap to just one point heading into Bark River. Jared Jadin finished third.

570 SXS: Chase Braun set the fastest lap of the 570 SXS race on Sunday and went the distance for his fifth win of the year. Saturday winner Collin Paitl finished second and Ethan Dresel notched his second podium of the weekend in third.

170 SXS: Kody Krantz made it a weekend sweep in 170 SXS action at Dirty City. Krantz lead the final five laps on his way to his third win in 2021. Grant Dresel led early and kept Krantz in his sights before finishing second. Corbyn Wassenberg finished third. 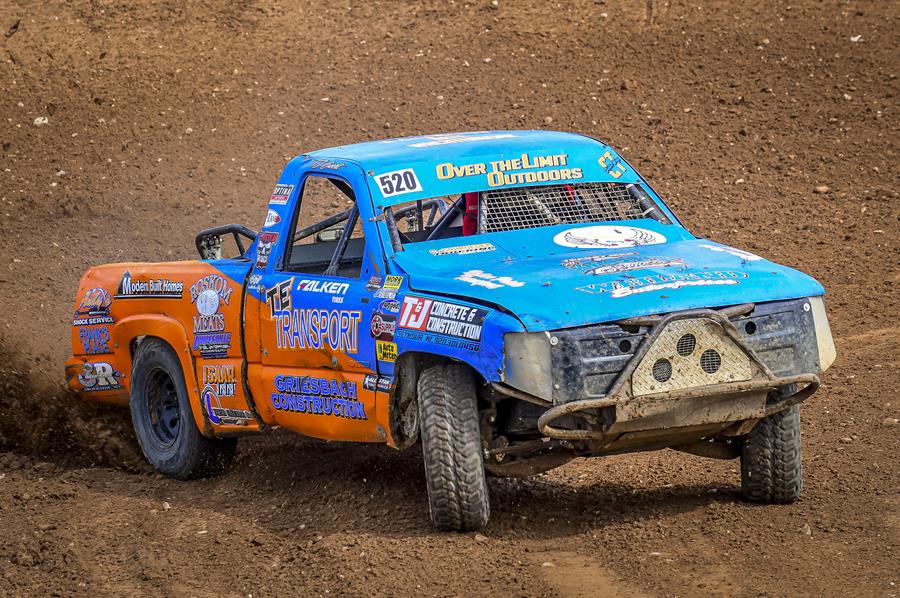 1600 LIGHT BUGGY: Colin Schulz had to work through some tough match-ups early before grabbing the lead for good on lap six in 1600 Light Buggy. It marked Schulz’s third win of the year as he extended his overall points lead. Defending champion Billy Buth had his best weekend of the 2021 season. He won on Saturday and worked his way into the runner-up spot with a last-lap pass on Sunday. Tyler Tizzle Wians finished third, less than a car length behind Buth.

SHORT COURSE KARTS: Wesley Vande Voort brought his A-Game to Dirt City, sweeping the weekend in Short Course Karts. Vande Voort made a late-race pass on points leader Ellah Holtger for the win.
MOD KARTS: Antonio Inglese now has three wins in Mod Karts. Inglese led from start to finish for the win and has not missed the podium since round two. Saturday’s winner, Michael Funk, finished second and Easton Sleaper finished third. 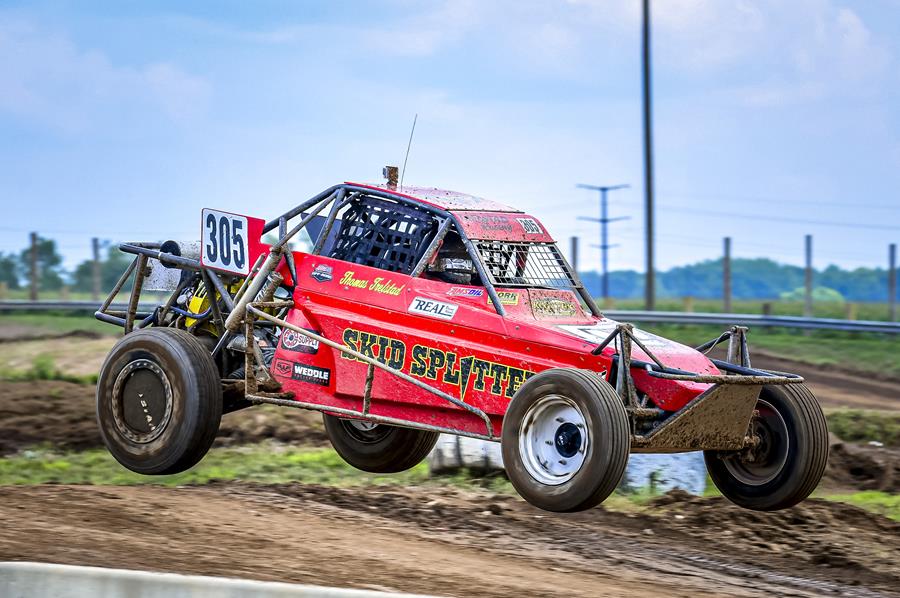 1600 SINGLE BUGGY: Thomas Trelstad has now won two of the past three 1600 Single Buggy after he went wire-to-wire in Dirt City on Sunday. Trelstad had a ton of pressure from points leader John Fitzgerald, who, along with third place finisher Travis Trelstad, were right on the race winners’ rear bumper as they crossed the finish line.

SUPER STOCK TRUCK: The top of the podium is a revolving door in the extremely competitive Super Stock Truck class, but Nick Byng has now found his way to the winner’s circle four times this season. Byng put on a great second half charge to take the win. Kyle Cooper made it double-podium weekend by finishing second and points leader Joe Maciosek kept his perfect season of podium finishes intact with a third.
AMSOIL Championship Off-Road has four rounds of racing left in the 2021 season and returns to action at the Bark River International Raceway in Bark River, Mich., August 14-15, 2021. Each Championship Off-Road event will be live-streamed at Champoffroad.com or on Flo Sports.