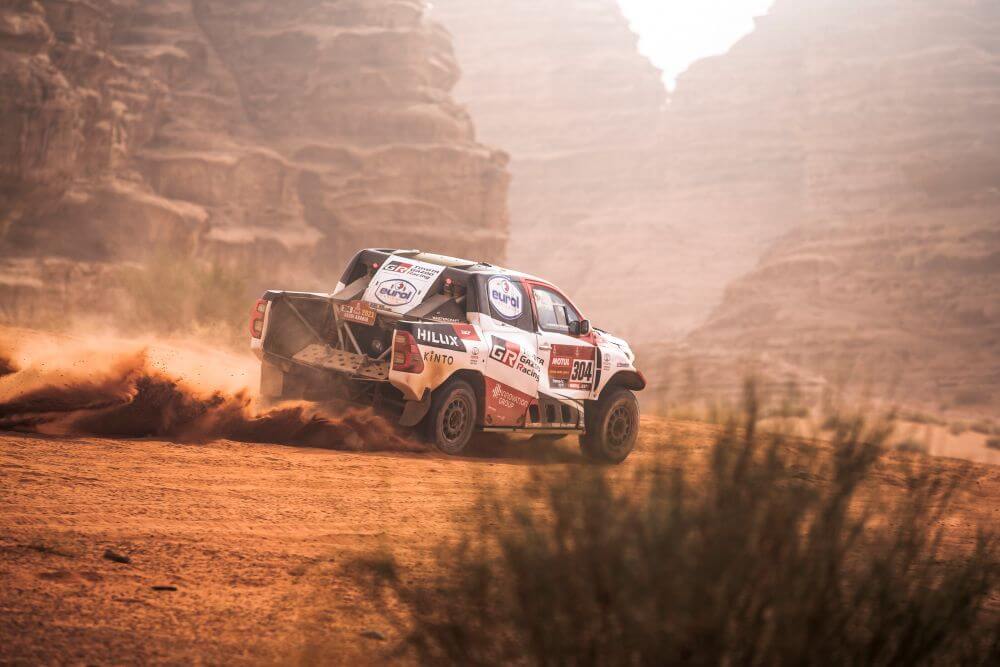 January 12, 2021
Neom, Saudi Arabia
Everything can change in the blink of an eye at the Dakar Rally and that’s exactly what happened on Stage Nine. Leading contenders saw the route to victory vanish on the 465km loop stage around the Neom bivouac, while others continue to chase their dreams in the desert…

In the continuing tussle between Stéphane Peterhansel and Nasser Al-Attiyah at the front of the car race it was advantage Monsieur Dakar on Stage Nine. Race leader Peterhansel was able to increase the gap to second place Al-Attiyah by 12 minutes on today’s loop stage, putting the Frenchman’s overall lead at 17m50s. At the finish line Peterhansel was quick to praise his co-driver Edouard Boulanger who has been playing his part at this Dakar dominated by tricky navigation.

“It was always going to be a long day so we decided in the morning that we would not go full attack. We wanted to manage the tyres and be clean with the navigation. We overtook Carlos and Nasser. It was more a question of strategy than speed. My co-driver Edouard did a great job.” – Stéphane Peterhansel

A trio of flat tyres interrupted Al-Attiyah’s progress, but the Qatari will dust himself down and get back in the fight tomorrow.

“We had three punctures, three flat tyres. After that we didn’t have any spares so we just decided to go safely to the finish. I’m not disappointed because I know I did all I could today and still everything is possible on the final three days.” – Nasser Al-Attiyah

Early in the stage Carlos Sainz lost his brakes, he spent 21 minutes trying to fix it but could not. Sainz continued the stage, losing only 22m30s to the leader. Also getting to the finish line of the 465km timed special stage were Giniel de Villiers, Cyril Despres and Kuba Przygoński.

“It was a tough day. 465km full of rocks and full of riverbeds. It was an amazing landscape. We ate a stone and had one bad puncture a few kilometres from the finish, but we came through it.” – Cyril Despres

After the stage Despres and his co-driver Mike Horn took part in the Dakar Future presentation inside the bivouac. The pair showcased their innovative and ambitious project to compete at the 2023 Dakar in a hydrogen-powered vehicle named GEN-Z.

At the conclusion of Stage Nine at this Dakar there is a 45 minute advantage at the front the truck race, and it belongs to Dmitry Sotnikov. The rally could not be going much better for Team Kamaz Master. As well as having a driver well out ahead, they also occupy the remaining two podium spots in the general classification.

“We are very pleased with this day, we are happy that everyone returned to the bivouac with a good result. There are three days left before the end of the race, we have to prepare trucks and reach the finish of the Dakar.” – Eduard Nikolaev, deputy team leader of Kamaz

It’s a cruel end to the rally for Toby Price who crashed 155km into Stage Nine and suffered a broken collarbone and extensive bruising. Just yesterday Price had stunned the bivouac when he arrived back from the Marathon Stage with a rear tyre held together by cable ties and duct tape. The two-time winner had kept himself in the hunt for victory, but on today’s stage his race ended early. We wish him a speedy recovery from his injuries.

“It was a really bad day for our team today because of Toby’s crash. It’s really a pity because after yesterday’s stage when he repaired his wheel really good. During the rally he has been riding really well and for sure he had the chance to win this race. The positive side is that the injury is not bad, he’s well and hopefully he can recover fast.” – Jordi Viladoms, KTM Factory Racing Rally Team Manager

Fellow Red Bull KTM Factory Racing biker Sam Sunderland stayed with his team-mate at the site of the accident for 15 minutes before Price was airlifted to hospital.

“I saw my buddy Toby laid up in a river bed with Brabec already stopped with him. I went over there to help let out the air of the airbag.” – Sam Sunderland

The rally also continues for Matthias Walkner and rookie Daniel Sanders, who both moved up the general classification today. Despite suffering a crash of his own on Stage Nine, Sanders is sixth overall and has a chance to emulate Price by finishing his first ever Dakar on the podium.

“I had a big crash at 50km. I went off into the rocks at the side of the road, the airbag went off and I had a few tumbles in the rocks. That wasn’t a good start… Then I saw Toby down and that sort of the shook the brain a little bit more after my own crash this morning. Hopefully he’s all good and he’ll be back on it soon I’m sure.” – Daniel Sanders

Getting to the finish line and one step closer to Jeddah were the bikes of Laia Sanz, Camille Chapelière and Štefan Svitko.

“The stage was tough, long and really dangerous. I didn’t enjoy it so much, but I’m glad that I’m here in one piece.” – Laia Sanz

Taking the stage win today in the Lightweight Vehicles race and regaining the overall lead of the category was Chaleco López.

“The special was the most difficult stage of all the Dakar. There were lots of tracks and rocks, but on every special there’s been no problem thanks to good navigation from my co-pilot.” – Chaleco López

Gearbox trouble on Stage Nine has ended rookie Seth Quintero’s hopes for a podium finish in the Lightweight Vehicles race. The Dakar’s youngest ever stage winner was on to set another fastest time before his OT3 came to a standstill, eventually getting towed to the finish line by the team’s assistance truck.

Tomorrow brings the Dakar convoy to Al Ula, via a 342km timed special stage. The route promises landscape that’s both beautiful and tough to navigate.

You’re receiving this newsletter because you’re subscribed to the Red Bull Desert Wings newsletter, our distribution service for inside stories covering our Red Bull rally-raid athletes.