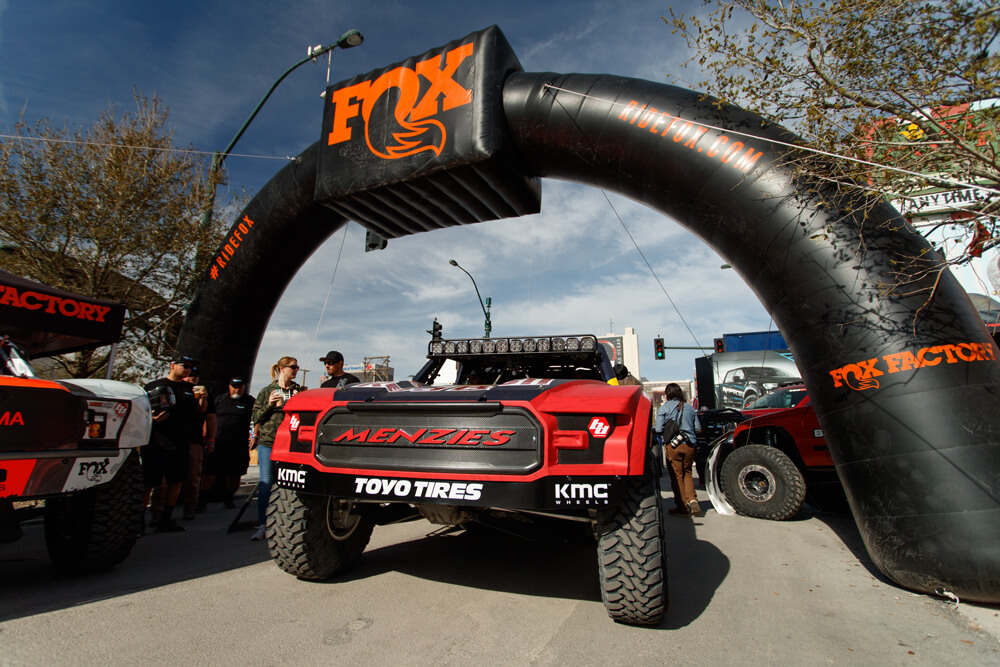 Victory For FOX At The Mint 400

Las Vegas loves to party, and one of the highlights is the vehicle parade and vending area. FOX hosted autograph sessions with several athletes, moved some merch, and talked about their latest products.

Bryce Menzies was their top Unlimited Class qualifier in third position, which put him on the second row for the start of the race. Other FOX Top 10 Unlimited Truck qualifiers were Luke McMillin (4th), Justin Lofton (6th), and Rob MacCachren (8th). Cody Parkhouse was the top qualifying Class 1, while Justin Blower and Brad Lovell qualified 2nd and 3rd respectively in the Baja Truck class.

After two brutal laps, which saw 10 DNFs and 25 riders pulled after the first lap for not making the time cut, Graham took the checkered flag in 4:45:35. He crossed the finish line 45 minutes quicker than Smith in second place. Smith is the son of Malcolm Smith, two-time winner of the Mint 400.

The Mint course features the FOX Proving Grounds, a notoriously brutal section of race course where properly tuned suspension is critical and separates the fastest from the rest of the field. Branden Sims and Jake Carver took the top two spots in the UTV Pro Turbo class with their FOX Live Valve-equipped Polaris RZRs, while Dustin Jones took 3rd place in his FOX-equipped Can-Am.  Shock Therapy co-owner Justin Smith took an impressive 4th place with his FOX iQS-equipped Can-Am, making it a Top 4 sweep for FOX. Twelve-year-old Jack Olliges, son of the driver of the #27 FOX Unlimited Truck Steve Olliges, won the UTV Rally class, with Cameron Maister finishing second.

After the early leader suffered a head gasket problem, this opened the door for a three-way battle between another driver, McMillin and Menzies.  The trio began the last lap four seconds apart. A flat tire took the other driver out of the lead, and McMillin was ready to pounce. He crossed the finish line in 6:49:32; his margin of victory over Menzies was 8 minutes, 16 seconds.

It was the fourth overall victory in the Mint for the McMillin family. The 29-year-old Californian took top honors 32 years after his Hall of Fame father Mark claimed victory. Andy McMillin, Luke’s cousin, won in 2009 and 2014.

“The McMillin family has been in off-road racing for generations, and here they are again, not only winning the biggest and baddest off-road race, but arguably the hardest, being that we were four laps and 428 miles this year,” added Mint 400 CEO Matt Martelli.

Established in 1995, Mad Media is a San Diego based marketing and creative agency, specializing in adrenalized film and television production. Owners Matt and Josh Martelli have spent over two decades crafting authentic, culturally engaging brand messages in print, web, photography, and film platforms for some of the worlds top brands including Red Bull, BFGoodrich Tires, and Polaris Industries.  Mad Media’s viral film projects, such as the Gymkhana series and XP1K series, have been viewed hundreds of millions of times. From their early days as pioneers of branded viral video content for skateboard companies Osiris and Expedition, to their most recent work spreading the gospel of off-road racing with the world famous Mint 400, Mad Media remains a powerhouse pioneer of digital media.