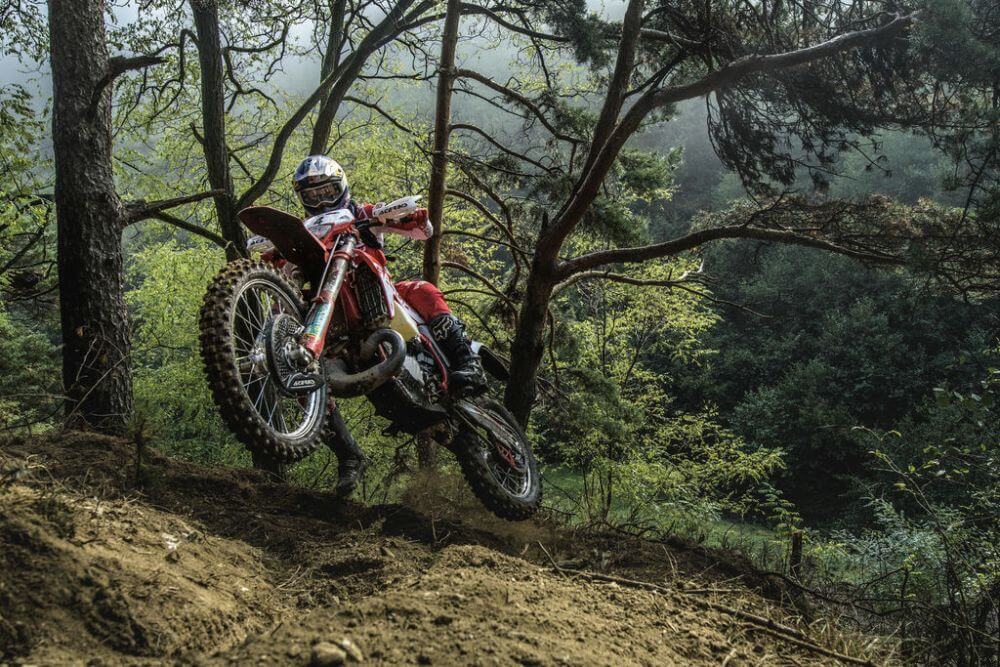 Sibiu, Romania, October 27, 2020 – Against all odds the 17th edition of Red Bull Romaniacs went ahead today with the Time Trial Qualifications. With strict Covid regulations in place, the format has changed this year, there is no inner-city prologue, no Gusterita Hill climb finish and no spectators. However, the Vertical Madness did kick off today, hosting competitors from 29 nations, with a time trial qualifying session that took place on tracks varying between 8 and 18 km, depending on the class. The theme was faster, more flowy tracks, where competitors were able to go up against each other to gain the fastest time.

At 9 o’clock this morning, in a thick fog, the competitors lined up at the start, after having gone through a medical triage, necessary due to Covid regulations. The Gold class riders were the first to go, the start order was based upon last year’s results; Manuel Lettenbichler (DEU/KTM) set out first, followed by Alfredo Gomez (ESP/Husqvarna) and Graham Jarvis (GBR/Husqvarna). The qualifying session determines the start order for the Offroad Day One. The winner will start in 3rd place, second place starts in second and the third place competitor will be at a slight disadvantage by being sent out into the unknown first tomorrow morning.

Wade Young (ZAF/Sherco), who won in 2018, followed by an injury in 2019, set out in 12th position today and managed to come in with the best time giving him the strategic advantage for tomorrow. Young was 44 seconds ahead of Alfredo Gomez and Billy Bolt and 58 seconds ahead of the King of the Carpathians, Graham Jarvis. The defending champion, Manuel Lettenbichler, finished the race 1 minute and 3 seconds behind the leader and will start tomorrow in 5th position.

Wade Young: “I didn’t do anything stupid today, kept things smooth, it felt good. There were a few challenging uphills with a lot of roots. I’m expecting a few long days but I feel good”

Alfredo Gomez: “Good day, no crashes, few mistakes but good speed and good start. The grass is wet and slippery, especially going down”

Billy Bolt: “Quite nice, a fun track, a couple of difficult sections. Fog at the start and end but nice everywhere else, so far, so good”

Fabien Poirot opened the race in the Silver class, followed one minute behind by Peter Weiss (DNK) and Fernando Valera (ESP). The first two had an excellent race, and finished 22 seconds and 38 seconds behind the leader Joe Deakin (GBR).

The Bronze class was opened by Jack Berry (GBR), followed by Gavin McCarthy (USA) and Dmitry Tagirov (RUS).  But it was Alexander Gehlert (DEU) who scored the fastest time.

Romanian competitor Emanuel Gyenes, the only rider in the world to participate in all 17 editions of Red Bull Romaniacs, entered the Iron class this year due to an injury  preventing him from competing in his usual Silver class.  Despite injury, Mani kept his longevity record intact and managed to finish the Iron class qualifiers in second place, 22 seconds behind Courty Romain (FRA) and more than two minutes ahead of Luis Monteiro de Carvalho (BRA) who came in third.

The new Atom class, created this year for amateur riders who want to give Red Bull Romaniacs a go, were subject to an 8 km time trial today. The fastest competitor, Rich Mumford (USA), completed it in 23 minutes and 21 seconds.

Tomorrow the Gold class will cover 114km, the Silver class 116km, the Bronze class 128km, the Iron class 89km and Atom class 79km. The Gold and Bronze classes will be first out at 07:45 hrs.

It was a challenge unto itself to be able to get Red Bull Romaniacs off the ground this year, founder Martin Freinademetz has this to say: “The situation changed more than a hundred times this year. We had 14 months to prepare the event which is longer than ever before and we have made no compromises with our safety measures put in place. We pushed hard to get on with the race and were really happy to show and prove that Romania is able to offer this International sporting event despite the challenging times. Only 20% of the participants came and we are happy for those who are here. There will be no prologue or spectators this year and we encourage people to follow our social media and live news and TV.”