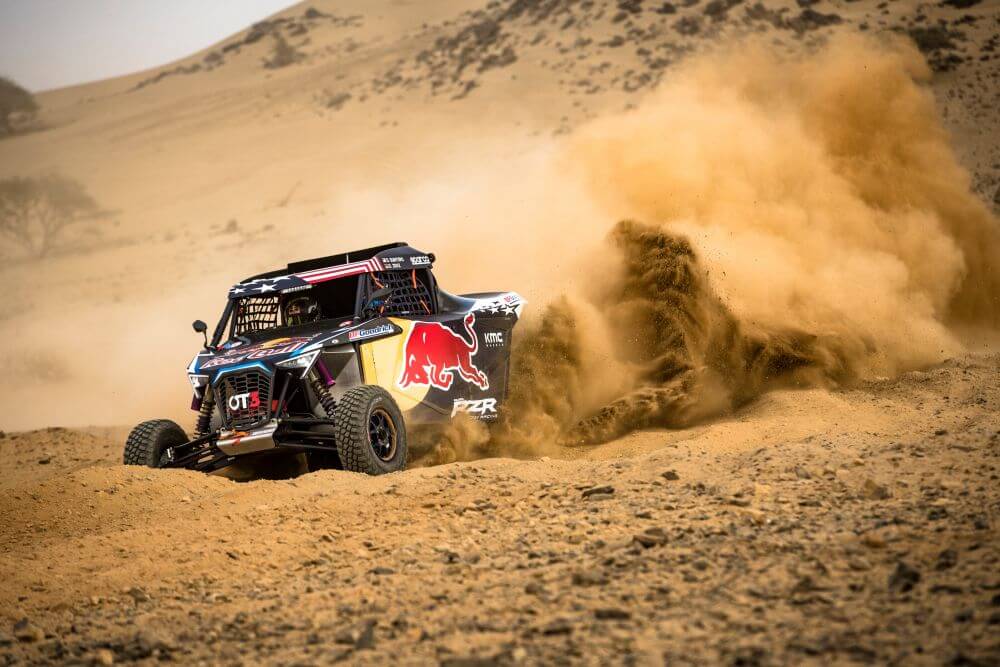 The Red Bull Off-Road Junior Team showed plenty of speed over the first competitive kilometres of the 2021 Dakar Rally. The squad claimed a podium place in the Lightweight Vehicles category as today’s 11-kilometre prologue served as a preview of what is to come over the next two weeks.

Seth Quintero’s frustration at being too young to race in Saudi Arabia last year has given him extra motivation to make the most of his Dakar debut. The 18-year-old put in a faultless performance on the opening day of the 2021 Dakar to take second place on the prologue, missing out on the stage win by just two seconds.

“We’re done with the prologue, technically the first stage, and we had a really good run.” – Seth Quintero

A serial Best in the Desert championship winner back home in the States, the teenager is now out to prove his speed at this truly global event. It’s also a first-ever Dakar for Quintero’s co-driver Denis Zenz.

Mitch Guthrie Jr. got his 2021 Dakar started with a solid prologue, finishing just 10 seconds back from race leader Kris Meeke. Over today’s distance the team’s OT3 machine was able to match and exceed the pace of not only other T3 machines in the race, but also T4 SSVs. The early signs are there for a fascinating contest in the new Lightweight Vehicles category that merges both T3s and T4s into one competition.

“The car is amazing, zero issues with it. We’re ready for tomorrow.” – Mitch Guthrie Jr.

Guthrie Jr. has been looking forward to coming back to Saudi Arabia since getting his first taste of the Dakar last year. An impressive Dakar debut alongside co-driver Ola Floene saw the duo collect a pair of stage wins. This ambitious crew are aiming for even greater things this time around.

After finishing four Dakars in the Car category, Cristina Gutiérrez is trying her hand at the Lightweight Vehicles division. The Spaniard has adapted quickly to her new machine and finished the prologue inside the Top 15.

“I felt very comfortable with the car and the pace notes from François.” – Cristina Gutiérrez

On her debut Dakar Gutiérrez came home as the fifth fastest rookie in the Car race and aims to have a similar impact on her new category. Reading the roadbook for Gutiérrez in Saudi Arabia is François Cazalet.

Tomorrow sees the Red Bull Off-Road Junior Team tackle stage one of the 2021 Dakar Rally as they travel from Jeddah to Bisha. In addition to a 345-kilometre liaison section there’s a punishing 277-kilometre timed special stage. Fast tracks with loose stones carry the threat of punctures while navigational challenges will keep the co-drivers on their toes.