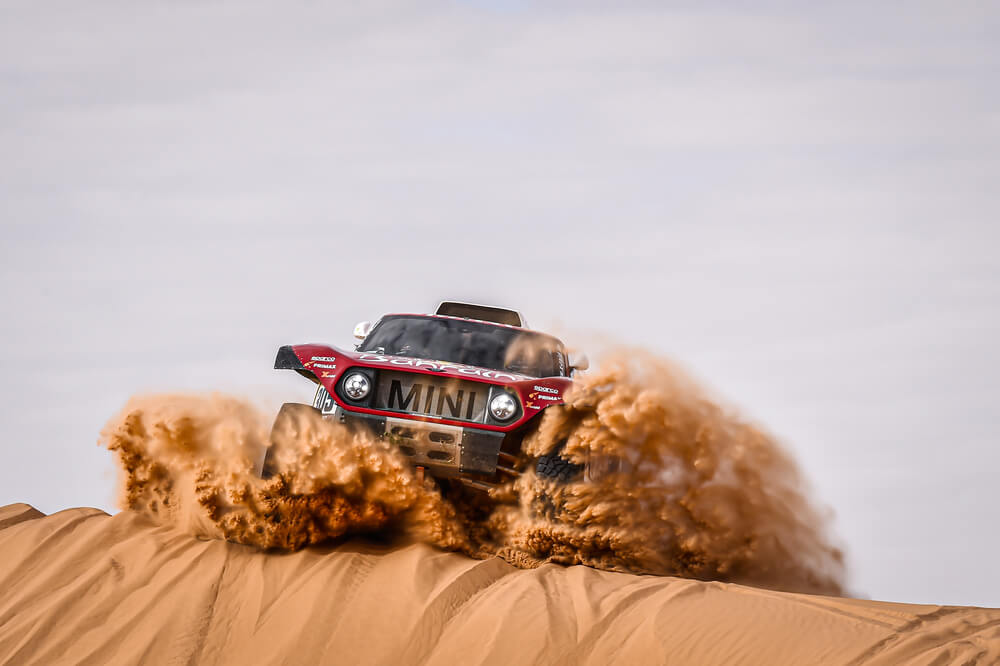 2020 Dakar Rally Into the void

After six stages, the first edition of the Dakar held in Saudi Arabia has reached the capital Riyadh, with 262 vehicles (108 motorbikes, 15 quads, 65 cars, 34 SSVs and 40 trucks) still in the race, amounting to 77% of the competitors who set off from Jeddah a week ago. 39 of the 80 competitors who were forced to withdraw have decided to continue their adventure and tackle the remaining stages under Dakar Experience rules.

As the race heads towards the dunes of the Empty Quarter, which have the potential to shake up the classification, the leaders of the various categories face different scenarios: Ricky Brabec has staked his claim to become the first American winner in the motorbike category, Carlos Sainz is pursuing his third victory in the car category and Ignacio Casale has almost got the quad race in the bag. Finally, “Chaleco” López holds a slim lead in the SSV category, while Kamaz remain the big favourites to win the truck race despite the withdrawal of their leader, Eduard Nikolayev.

Is Ricky Brabec on track to win the Dakar for the first time? The American is still keeping his guard up despite holding a lead of 20 minutes over Pablo Quintanilla and a bit more over Toby Price and José Ignacio Cornejo as the rally heads into its second week. Once bitten, twice shy, as they say. After failing to finish the three previous editions, Brabec is painfully aware that the race is not over until it is over, and a lot can happen with six stages to go. One thing is for sure: Brabec has flawlessly executed his plan for the first part of the rally, which seemed to have his name’s written all over it. Riding on technical and rugged terrain not unlike the tracks on which he trains back home in California, he avoided all the pitfalls while setting the fastest pace. Since moving into the lead after stage 3 around Neom, he has discreetly made his first down payment on the first edition of the Dakar held in Saudi Arabia. The American’s brilliant performance in the first half of the rally has raised Honda’s hopes of ending a drought that stretches over three decades back.

Flanked by Cornejo and Barreda, who is getting stronger as the race goes on, and despite losing Kevin Benavides to a broken engine in the stage to Riyadh, Brabec is turning up the heat on KTM, which has maintained an iron grip on the race for 19 years. The winner of the last edition in Peru, Toby Price, has taken two stages so far, but he has been rather inconsistent and destroyed his rear tyre between Ha’il and Riyadh, where he conceded over 15 minutes to Brabec. In further bad news for KTM, Sam Sunderland crashed out of the race in stage 5. However, the Austrian maker can still take comfort from the fact that Pablo Quintanilla and his Husqvarna remain within striking distance. Meanwhile, the first half of the rally was a true ordeal for Yamaha, which lost its two leaders, Adrien Van Beveren and Xavier de Soultrait, to injuries in quick succession.

28 of the 41 bikers racing without support in the Original by Motul class are still eligible for the general classification at the midpoint of the race, led by Romania’s Emmanuel Gyenes by over an hour over Florent Vayssade and 1 h 43′ over Benjamin Melot.

Quads: Casale in a league of his own

A duel between the two former winners on the start line, Ignacio Casale and Rafał Sonik, seemed to be in the making as the Dakar revved up for its first start in Asia. However, the Chilean made short work of the Pole, who is trailing Casale by an hour and a quarter halfway through the race. A stellar Casale took control of the general classification from the get-go with two victories in the first two stages, which took the field from Jeddah to Neom, while Sonik steadily lost ground despite his best efforts to hold on. After racing (and failing to finish) the last South American edition at the wheel of an SSV, Casale is making a victorious comeback to the quad category, which he already won in 2014 and 2018. 38 minutes behind the Chilean leader, Simon Vitse is sitting in second place as one of the breakout performers of the race, especially considering that the Frenchman had to sit out the last Dakar in Peru after sustaining grievous injuries in 2018. He marked his return to top form with a win in stage 6. Rafał Sonik is in third place overall, followed by another Frenchman, Alexandre Giroud.

Vaidotas Žala will go down in the history of the Dakar as the first car driver to win a stage in the Middle East. However, the Lithuanian failed to follow up on this victory, leaving the usual suspects to gain the upper hand in no time. The ever-consistent Giniel De Villiers claimed another first 24 hours later when he became the first man to win a stage on three continents. Carlos Sainz and Stéphane Peterhansel soon followed suit with two victories apiece. The Spaniard now holds a substantial lead on the rest day, while the Frenchman made several navigation mistakes and is now third overall, a reasonable 16 minutes behind his teammate at Mini X-Raid. Sandwiched in between the two, Nasser Al-Attiyah is flying the flag for Toyota. Despite having failed to light the fireworks at the wheel of his Hilux, the reigning champion is reaping the still not fully ripe fruits of his consistency and reached Riyadh 7′48″ behind Sainz. The Qatari seems raring to go on the attack, but he may be waiting for the big dune stages of the second week to tighten the screws on the leader and force a mistake.

Although the three former winners, with a combined total of 19 victories, appear to be light-years ahead of the competition, local hero Yazeed Al-Rajhi is sitting in fourth place at 36′48″ and can still dream of a chain reaction of destruction in the front. However, a podium spot looks like a more realistic goal even if he does not go all in, as third place is just 20 minutes away. The same holds true for every driver within one hour of Sainz: “Orly” Terranova (+43′54″), Mathieu Serradori (+50′21″) and Giniel De Villiers (+55′41″). Other drivers have seen their dreams of overall glory dashed but remain in contention for stage wins, such as the duo of Fernando Alonso-Marc Coma (16th at 3 h 18 and first rookie), Nani Roma (28th at 6 h 34) and Jakub Przygoński (38th at 8 h 25). In contrast, Romain Dumas left the Dakar with a bitter taste in his mouth after his car caught fire 65 km into the opening special.

SSVs: “Chaleco” on top of things

No-one knew who Aron Domżała was. Now they do. The Pole burst onto the scene with a win in the opening special, only to plummet down the general classification due to a spate of mechanicals in the second stage and suffer a series of infuriating near-misses: 11″ behind Farrés in one special and then 19″ behind Cyril Despres in the following stage. Although a broken engine put paid to the overall ambitions of the five-time champion in the motorbike category, his adventure with Mike Horn continues under Dakar Experience rules, allowing him to become the first man in the history of the Dakar to win specials in three categories (motorbikes, cars and SSVs). Meanwhile, the project on which he is working with Red Bull is already bearing fruit, as young American Mitch Guthrie cruised to a stage win. However, the reigning champion, Francisco “Chaleco” López, remains firmly in control of the SSV classification with about 10 minutes to spare over Casey Currie. The American will no doubt try to take the fight to the Chilean in the coming days, as will former quad champion Sergey Karyakin.

The blue boys look poised to take another victory, but probably not with five-time winner Eduard Nikolayev, who conceded almost four hours in the opening stage. The Russian stable has always found strength in numbers and this year is no exception. Andrey Karginov, Anton Shibalov and Dmitry Sotnikov divvied up four of the six stages so far among them, with Karginov and Shibalov also leading the general classification by a sizeable margin. This gives Kamaz an ace up its sleeve in case 2014 champion Karginov falters. 36 minutes behind the leader, Siarhei Viazovich and his Maz are the real threat. Meanwhile, Aleš Loprais is sitting in fourth place, ready to exploit any opening to grab a podium finish like he did when he finished third in 2007.