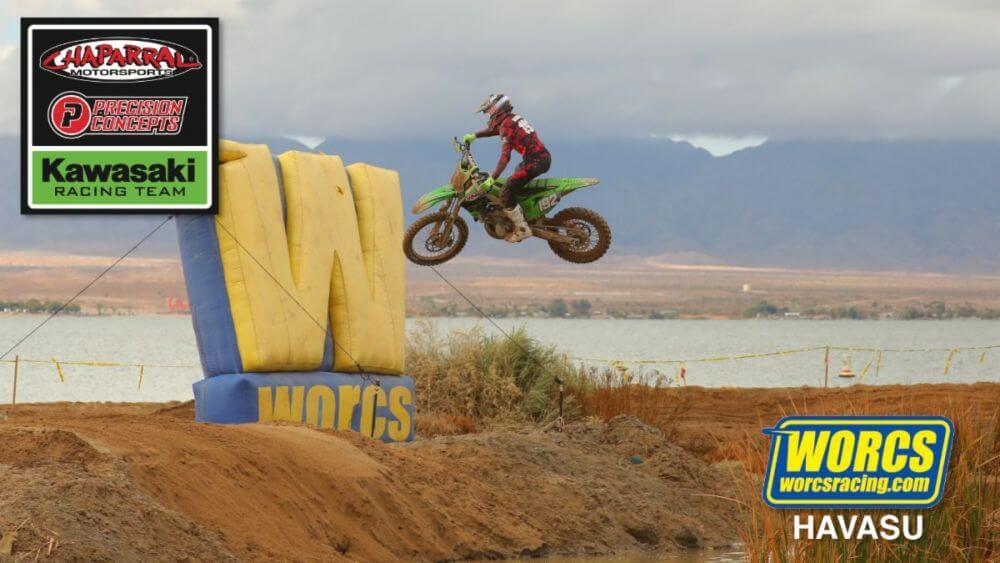 The 2021 WORCS season opener would take place in Lake Havasu City, AZ for the first time in series history. The move away from the normal month of March resulted in cooler weather for the race weekend. Lower temperatures meant riders could push harder with less physical stress. In addition, Sunday morning rain showers added an extra dynamic to course conditions, making it softer in spots, and rougher in others. In spite of the atypical Havasu conditions, one thing remained constant: The two-hour Pro race was going to be brutal.

As the line of 450 Pro’s took off, Zach Bell was right at the front of the pack. He jostled for the lead early-on as the top six riders swapped positions over the opening laps. Once the early-race sprint calmed down, Bell had settled into fourth place. He looked comfortable as he stalked the third-place rider. Then, his race took a turn as he dug his front end into a soft patch of sand. His KX450X knifed, wickedly, and sent him to the ground. After remounting, Bell came into the pits to sort out his front end. He rejoined the race a ways down the order, looking to salvage what he could, but his bike didn’t feel quite right. Zach circulated the next few laps, but it was clear he wasn’t going to make any ground on the riders ahead. With an ailing bike, and Zach still working his way back to full health, the team felt it best to settle for the thirteenth-place finish and regroup for round two.

As the line of hungry 250 Pro’s rocketed down the start straight, Alvarez found himself outside the top-ten. J.P. worked feverishly to move forward early in the race. Though he had a couple minor setbacks in the opening laps, Alvarez had managed to close in on the top-five over the first fifty minutes of racing. Then, through the pit stop rotations, the KX250X-mounted racer had closed up to the rear wheel of the fourth-place rider. Alvarez looked for an overtaking opportunity, but when he took it, the other rider made contact with him. Unfortunately, the contact not only sent J.P. to the ground, it also loosened his rear brake bleeder bolt. The result was a complete loss of fluid, and his rear brakes. After remounting in seventh, Alvarez worked to preserve his position, but his pace had slowed with the loss of brakes. At the finish, he’d managed to salvage tenth.

Clay’s race started decently enough, as he slotted just inside the top-ten. From there, the KX250X-rider settle in around seventh, pacing the riders just ahead of him. Unfortunately, on the third lap, Hengeveld had a big moment. As he navigated a whoop section, his front wheel popped up onto the edge of the course, while his rear tire stayed down in the whoops, sending him sideways. When that happened, his rear end recoiled and sent him to the ground hard. After sorting himself out, Hengeveld rejoined the race outside the top-fifteen. Over the next hour, the Kawasaki rider steadily moved forward and was making progress toward the top-ten late in the race. Hengeveld, then, suffered one more fall, which halted his forward progress, and he crossed the line in twelfth.

“This was definitely a tough weekend for our team. Zach’s race started well enough, but after the crash, and resulting issues, we made the call that there wasn’t much to be gained from forcing it out there. I know Zach’s frustrated with how the race went, I am too, very much so. The saving grace is that he earned some points, and there’s plenty of racing left. We just need to be better.

“Both J.P. and Clay had a race full of incident. I’m glad Clay isn’t injured from his fall, from what I heard, it was pretty violent. J.P. had solid momentum pushing forward through the pack. In my opinion, his pace was worthy of fourth after starting so far back. But after the contact out there, which saw him lose his brakes, it was always going to be tough to keep the pace.

“Though it’s hard, I don’t want to judge ourselves on this weekend. Rather, I want to see how we rebound, build and come back from it. We have three weeks to regroup, and we’re going to focus and fixing what we can and getting back to the results we’re after.”