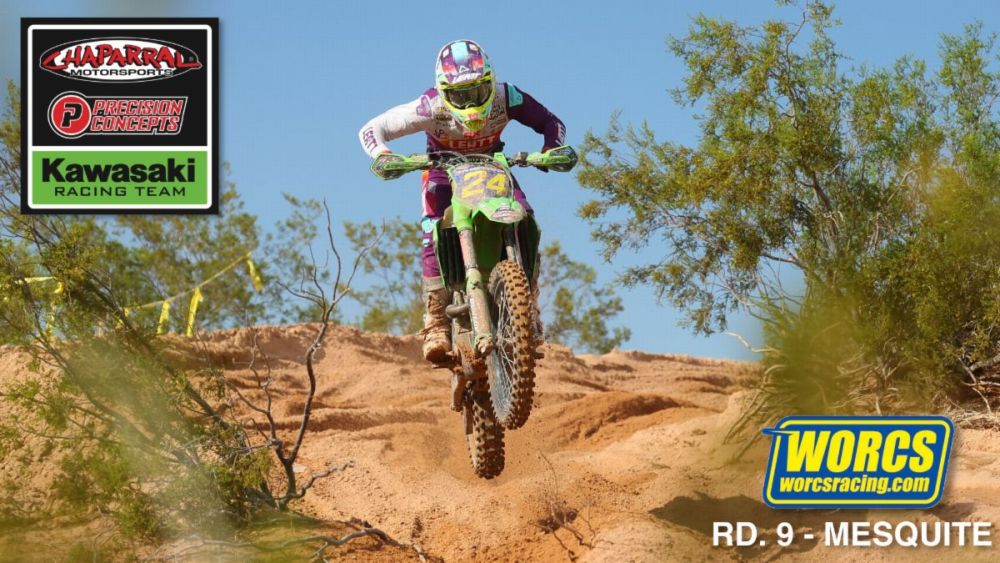 The deep sand of Mesquite, NV would host the riders for the penultimate round of the 2022 WORCS season. Mesquite is well-known for having brutal conditions, as the sandy terrain develops sharp chop and steep whoops throughout much of the course. The conditions always make for a demanding two-hour pro main event on Sunday.

Coming into the weekend, Tyler Lynn sat third in points, just four shy of second place. However, he came into the weekend a little less than 100%, recovering from an illness the previous week. Zach Bell would enter a sport race to get more seat time, testing his fitness, speed and strength. And Robby Bell would once more line up with the Vet Pro and A racers.

As the gate dropped for the pro race, Tyler was slightly off-balance, finding himself pinched as the 450 pro’s charged into the first turn. However, the Kawasaki rider was quick to recover around the inside of the sweeping first corner, pushing up to around fifth. Lynn held the pace of the leaders through the first lap and a half, settling into a solid pace. Over the next laps, Tyler would feel pressure from behind and find himself in a four-rider battle at the edge of the top-five. Lynn would drop back to seventh for a few laps, as the racers battled for track position. Despite not being 100%, the Team Green racer held tough and started to push forward as other racers began feeling the effects of the demanding terrain. Tyler moved back up to fifth by the halfway mark, with the SLR Honda pilot Tallon LaFountaine over forty-seconds up the course. With the laps winding down, Lynn maintained a strong pace, catching up to the Honda rider and overtaking him for fourth place. The finish maintained Tyler’s third place in points with one round remaining.

Zach lined up with the Vet Pro’s on Saturday to get over an hour of track time in race conditions. The deep whoops and demanding sand would be a good test of his fitness and strength in his return to form. The Kawasaki-ace took the hole shot and set sail. He quickly pulled a gap over teammate, and team manager, Robby Bell and held a consistently fast pace over the hour-long race. It was another positive step forward as Zach looks to return to his flying best for the 2023 season.

While Zach took the hole shot, Robby started in third place. After passing the Husky of Matt Canepa, the older Bell had nothing for his younger namesake on the day. Still, Robby was able to stretch out a gap over the rest of the Vet Pro and A riders, which was fortunate, as a late-race fall cost Bell nearly a minute’s worth of downtime. When the checkered flag came out, Robby held on for second overall in the race, first Vet Pro.

“Mesquite is always brutal, even when you’re fully fit. So, for Tyler to stay as strong as he did, and come away with a fourth, is a really good performance. He’s had a great season this year, learned and developed quite a bit. I know he’ll be looking to finish out these final three rounds [between the two series] strong and push to get back on the box before the season closes. I have every confidence that he will. Zach got another hour under race conditions under his belt, on a course that will definitely test you. So, that was another very good step forward in his return to form. I think he’s pretty happy with where he is, especially considering the long lay-off. So, we’ll just look for him to continue to build through the rest of this year in order to start 2023 as strong as possible.”