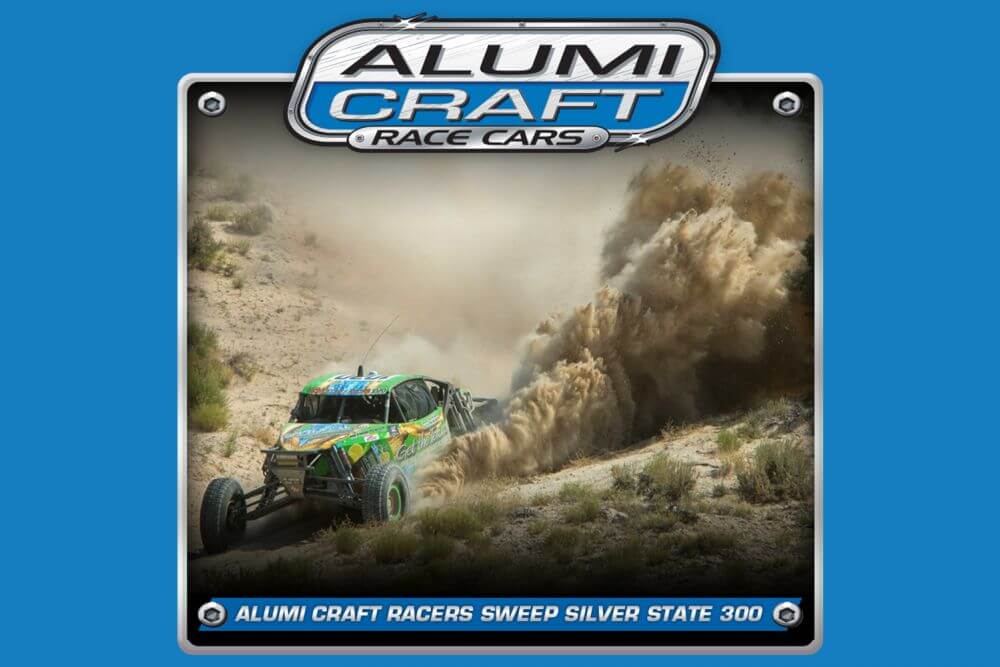 Alumi Craft Racers Turn Up The Heat At Silver State 300 With Win, Podium Sweep and 9 In The Top 10

The Best In The Desert (BITD) resumed the 2020 series with the Silver State 300 and it was certainly one to remember. Alumi Craft Racers stole the show and delivered impressive results; Conner McMullen punched in the Class 10 victory, an all Alumi Craft podium sweep rounded out with Brett Jeffers placing 2nd, and Freddie Willert finishing 3rd. Additionally, 9 of the Top 10 were all earned by Alumi Craft Racers.

Officials labeled the event “The Scenic Byways Of Nevada” and scheduled a 300-mile course planned near Alamo, Nevada, loaded with stunning high desert vistas. Instead, there was shock and awe, like everything else in 2020, as lightning struck and ignited a freak wildfire near the course in multiple locations the day before the race on Friday. BITD & BLM reacted rapidly to devise necessary course deviations and started the race on time Saturday morning. As the situation unfolded, it would be determined that the race would end at Pit 6, which was around 220 miles.

Conner McMullen managed the challenging course in the #1020 GetTheTea.comAlumi Craft Race Car with a total finishing time of 4 Hours, 14 Minutes, and 43.095 Seconds to pick up another win. McMullen’s 1st place finish adds to his consistent string of recent consecutive victories.

“This was the toughest race we had ever been in for passing!” Connor said. “The 6100 and 6200 vehicles were almost impossible to pass all day. We never had a dust-free run except for in the pits. I had a tire go down and we drove about 4.5 miles on a rear flat to Pit 5, where we did a full tire change and fuel. At that point, I think we were the first on the road but in 2nd place on time by about 3 minutes. So my dad [Kevin] said let it all hang out to the finish. We ran it hard all the way and got the win by 16 seconds it looks like.”

“I am super excited to get the win at our first race back,” Conner continued. “Thank you, BITD, for doing an incredible job hosting the Silver State 300 and to all of our sponsors for supporting us.”

Brett Jeffers in the #1069 Alumi Craft finished the race in 2nd place with a total time on the course of 4 Hours, 14 Minutes, and 59.415 Seconds and seemed to be right on the winning pace all day. “I started 9th off the line and finished in 2nd position physically. We did a driver change at Pit 4, and in hindsight, we probably should have skipped that to edge out McMullen for the win. But the radio was broken, and I had no idea about the racecourse being shortened. We will take the podium. John Cooley and Alumi Craft build the best cars out there. This one is a single-seater and was built especially for me! It is my second full season and we have had zero issues. I feel like it’s one of the best race cars on the planet!” said Jeffers.

Rounding out the Class 1000 podium sweep for Alumi Craft was Freddie Willert & Co-Driver Stan Porter in the #1066. Their 3rd place finish time of 4 Hours, 23 Minutes, and 35.746 Seconds was hindered by lots of dust and stubborn Spec Trucks in a single lane track.“We decided to race the Silver State 300 late last week after finishing in 3rd place at the SNORE Skull Rush 250,” Stan Porter stated. “It was a last-minute decision, but fortunately, our car was freshly prepped and worked perfectly.”

Porter continued, “Coming from the back, we had lots of dust contending with several Spec Trucks and Class 1 cars throughout the race. Racing in Nevada with BITD was a great experience and we learned a lot. It has been two podium finishes in a row, so we can’t wait for the next race!  Thanks to John and team at Alumi Craft for building such a great race car!” Stan Porter started and drove to Pit 4 and Freddie Willert drove to the finish.

Alumi Craft Race Cars performance and reliability is consistently demonstrated with a winning record. Off Road Racers aiming for the podium know Alumi Craft is the clear choice to get you to the finish line. If you are looking to take on a competitive challenge such as off road racing, get in touch with Alumi Craft Race Cars for an expert consultation on what is needed to win races. Give Alumi Craft a call at 619-596-9841 or go to: http://alumicraft.info/ to find out more about our race products and services.

Bink Designs is a premier digital media marketing company located in San Diego, CA. Since 2007, Bink Designs has been committed to providing cost-effective solutions for clients’ high-end marketing needs. Bink Designs will work with you to develop a strategy that matches your goals. Bink Designs offers a number of services, including: Identity, Print Design, Vinyl Graphics, Web Design, Photography & Apparel.