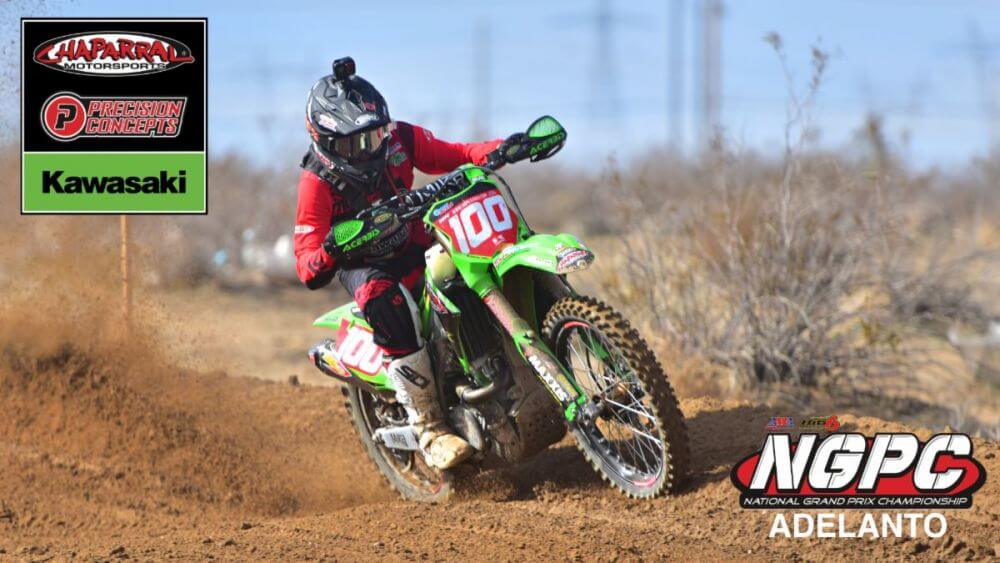 The Adelanto grand prix has recently become the kick-off event for the new season of grand prix racing. Held at the Adelanto stadium, the event gathers much local interest, which brings in additional race entries and spectators and gives the event a grander feel. Though the race track is somewhat simple—winding and twisting through the surrounding flat desert—the volume of racers breaks the sandy terrain down rather quickly. As a consequence, the course develops a blanketed mixture of deep holes, rolling whoops and sharp chop. Over the course of the ninety-minute pro race, the rough terrain will most certainly take its physical toll on the riders.

The Chaparral Motorsports, Precision Concepts, Kawasaki team was looking to start off the year on a positive note. After a numerous dominating displays in the NGPC series Pro class in 2019, Zach Bell was planning to continue that momentum into 2020. In the Pro II class, Clay Hengeveld was looking to put the injuries of the latter part of 2019 behind him. Though his wrist still wasn’t back to 100% coming into the weekend, he was excited to get back to racing and see where he stood. JP Alvarez had his sights set on the podium. He showed flashes of speed at the 2019 season finale and was looking to turn that into a solid result to start the season.

With a deep field of pro riders, getting a good start would be ideal in terms of energy conservation on a demanding course. When the green lights lit to signal the start of the pro race, Zach hooked up well and entered the first turn with the lead. He instantly began opening up a gap over the pack of chasing riders, finishing the first lap with over fifteen seconds advantage. From there, Bell continued to stretch away lap on lap, though his race wasn’t a perfect one. Just past the halfway mark, Zach was entering a high-speed, sandy right-hand corner when the berm gave way. Bell hit the ground fairly hard, but was able to remount quickly without losing much time. After the fall, he was able to maintain smooth pace to the finish to take a comfortable win and get the season started in the best possible way.

“My race was good. I got off to the holeshot and put in my three sprint laps. That got me a really good lead. Then, I actually couldn’t tell if I saw ‘pit next’, or ‘pit now’ [on the pit board]. I was a little scared I missed it. So, I came in the next lap and it was good. Other than that, I had a little tip over, but I was able to recover from that and secure my first win here at Adelanto. The course was tough, especially trying to get out of the main line. It all funneled into one [line] and if you got out of that main line, it would set you up badly for the next section. That made it rough, but I like it rough. It was good to see where my fitness was and test my riding. Overall, it was a good start to the season, and for the team, with Jake [Alvarez] getting third [in Pro II]. Hopefully we can see Clay rebound and get stronger. Looking forward to the next one.”

JP’s 2020 Pro II campaign could have gotten off to a little better start. After spinning on the asphalt, he was dead last heading into the first turn. Alvarez was quick to charge forward, however, and came around the first lap just at edge of the top-five. Continuing his push to the front, JP was able to get into third place by the close of the second lap. From there, the two leaders had opened up a gap and without that tow, Alvarez couldn’t quite find the pace to make up ground. He had opened up a sizeable cushion over the rider behind, though, and was able to ride smooth, consistent laps to cross the finish line third, getting his season off to a positive start.

“I was a little anxious to get going and spun off the start pretty bad. I believe I was dead last, but was able to work up to fifth by the end of the first lap. Then, I settled in a little bit and made a couple more passes. Towards the end, I was able to just ride it out and get third. There were a lot of close calls out there. The course was a little beat up, a lot of hidden holes, but I felt strong the entire time. The bike felt awesome; the suspension, tires, everything was working perfectly.”

Clay’s start was only marginally better than his Pro II teammate’s. Through the first few corners, Hengeveld was buried just inside the top-twenty and had his work cut out to get to the front. The KX250-mounted rider was able to put in a solid first lap, making it all the way up to fifth. From there, Clay had a couple good battles with the riders around him as each jostled for position. Unfortunately, while racing with Mason Ottersberg, Clay’s race took a turn for the worse. The two entered a right-hand corner with Clay just behind, but searching for a way by. The two rider’s lines crossed slightly in the corner and Hengeveld hit the back of Otterberg’s bike. While Clay didn’t fall, his bike stalled and it took him a few minutes to re-fire, not to mention the energy expenditure. After losing significant time, Clay had fallen back to nearly twentieth, but continued to charge to the finish to salvage a sixteenth on the day.

“I didn’t get the greatest start, but was able to move forward. Honestly, I don’t even know where I was at, maybe fifth or sixth. I was trying to put in good, clean laps. Then, me and Ottersberg came together, I hit his back wheel and just stalled out. I couldn’t get my bike started and that got me really frustrated. Definitely not the weekend we wanted, but this is something we’ll learn from and get figured out. We’ll get ready for the next one and do what we can to get back up front.”