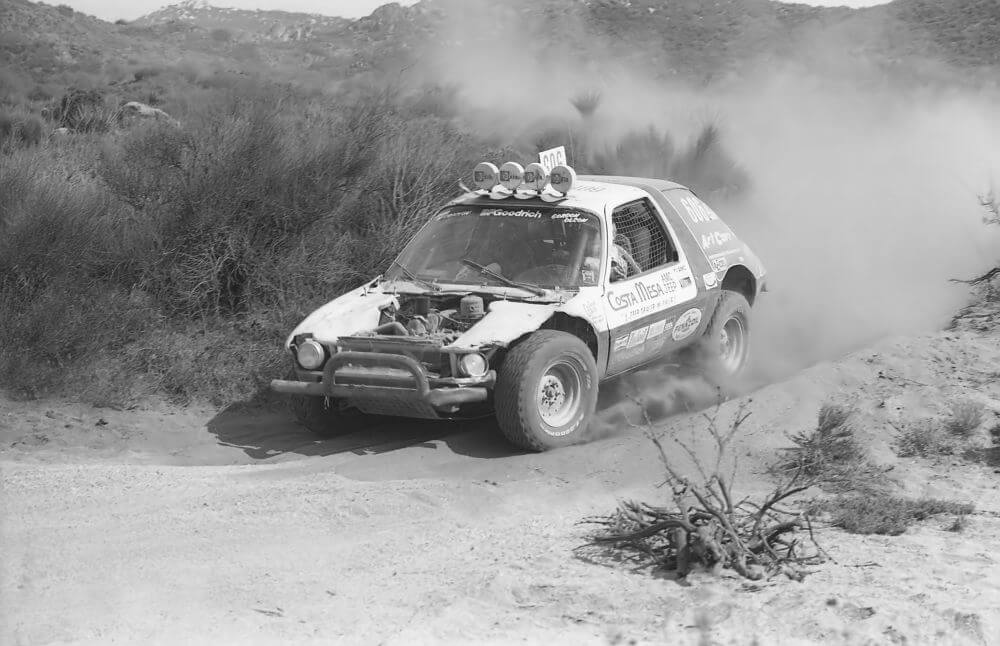 An ode to off-road racing’s Class 6

“To finish first, you must first finish” was no doubt the motto of every Class 6 entrant that ever competed in a desert race! The sedan class started way back in 1967 with the “Production 2 Wheel Drive Car” class that once pitted air cooled VW based sedans against water cooled sedans from AMC, Datsun, Saab, Ford, Chevrolet, Audi, Volvo, etc… The VW’s dominated over the water cooled sedans in part because of the rear engine design and the evolution of the aftermarket transaxles, suspension components, and so much more.

In 1976 the water cooled sedan manufacturers pushed promoters to either separate the air cooled sedans, or enforce the use of a single carburetor and single shock per wheel. The promoters chose to separate the class by designating a new class (6W – with the W designating a water pumper or water cooled sedan class eventually ending as class 6). The air cooled sedans were categorized in Class 5, and now they had a newly designated Class 11 Pure Stock VW class. It also would not be long before Class 5-1600 would come along and make racing a VW sedan more affordable than a Class 5 Unlimited, bridging the gap between the open Class 5 and the Class 11 Pure Stock VW.

The early water cooled sedans had some of the who’s-who of the day taking the wheel (James Garner, Rod Hall, AK Miller, Ray Brock, etc) and the manufacturers really liked the idea of racing their “grocery getter” to prove the durability of  their sedans. The class remained vibrant into the 80’s then morphed into a class dominated by Ford Explorers, Chevy Blazers, & Jeep Cherokees, eventually fading into just a memory.

A class 6 Ford Maverick makes it’s way through Ojos Negros during the running of the 1975 Baja 500. The Ford’s six cylinder engines had an advantage over the Datsuns in terms of cubic inches but the Datsuns were lighter and had some Japanese domestic market parts that helped boost performance.

A venerable Datsun 510 sedan competes in the 1975 Ensenada 300 held just outside Santo Tomas. This was a very dusty and silty course but the little Datsun took it in stride. The early sedans having been uni-bodies took a lot of reinforcing to keep from falling apart on the rough courses.

Frank Ball and Ron Thompson in a Datsun 510 navigate the canal roads outside of Mexicali during the running of the 1978 Baja 1000. This Datsun 510 won a Baja 500 and Baja 1000 or two in it’s day. The Datsun 510 was very popular in the 70’s and won the prestigious East African Safari Rally a few times. It soon became a favorite of the rallying crowd, and was a personal favorite of mine for slalom racing and maybe an occasional street race or two…

A Saab negotiating a checkpoint just south of Mexicali during the 1978 Mexicali 300. The Swedish manufacturers were very popular in class 6, represented by two or three Saab’s in various races with Arne Gunnarson and Bill Carpenter being a couple of the fan favorites

The “Fords Forever” sponsored class 6 is seen working it’s way out of Ensenada during the running of the 1979 Baja 500. In the early days of off-road racing Ford was well represented in many classes, but the most notable entry had to have need the Edsel that Bill Stroppe built.

Stan Gilbert’s Chevrolet Chevelle actually ran on propane and was sponsored by Ballard Gas. Stan is seen here crossing the Ojos Negros cattle guard in the 1980 Baja 1000, he would go on to race an El Camino as well taking many class wins.

A very popular and successful driver Henry Arras crossing the Ojos Negros cattle guard. Henry would go on to win many races in his V8 powered Ford Ranchero and was definitly a favorite amongst the class 6 fans.

Gordon Olson was part of an AMC Pacer team that won a few races in both Baja and the US. The AMC brand was represented by Gremlin’s and Pacers in the 70’s and ran cast iron inline 6 cylinder engines. The cars made decent power but were extremly heavy.

Henry Arras celebrating a class 6 win at the 1979 Baja 500. I recall staying up till 2 am shooting the finishers of the 1979 500 and Henry was one of the late finishers but a winner none the less!

A class favorite, and in my estimation the winningest driver in class 6 history. Larry Schwacofer piloted the Chevy for many years under a few different paint schemes. Here he is wheeling “Kermit” through a sea of spectators at the 1985 Mint 400 just outside of the Las Vegas Speedrome.

Here’s a good example of an air cooled class 6 sedan flying the Ojos Negros cattle guard during the running of the 1975 baja 500. This was just prior to the rule change that only allowed water cooled sedans.