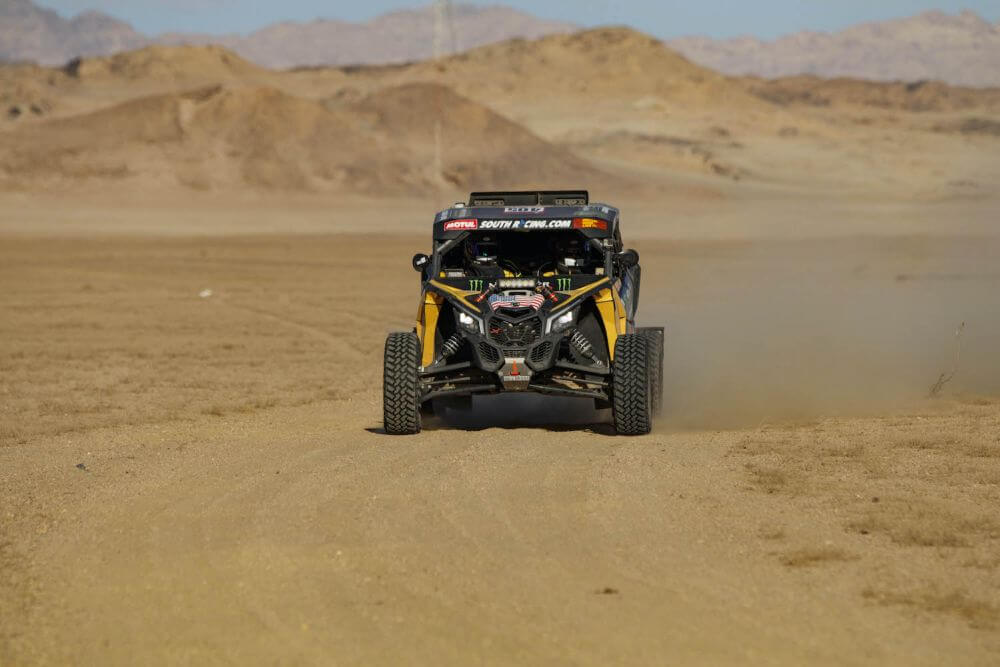 Stage 1 began with an early wake up to hit the road with a 195 km liaison to the start of the special. Drivers got in their cars around 7:30am and started making their way north out of Jeddah.

Casey and Sean got to the start of the special around 10:15am and stopped at the fuel truck to top off before they hit the dirt. The UTV class has multiple stops for fuel depending on how long the stage is.

This was the third longest stage of the Rally at 752 total kms. The special was 319 km and consisted of multiple styles of terrain.

“The opening stage is far from a stroll in the park. It features everything that makes up this Rally in a quick succession: fast, winding, dunes, stones. With all this variety, this mini-Dakar is not to be underestimated.” – Dakar

He started off with a great pace and at the first waypoint at km 47 he was in 3rd on corrected time only 27 seconds off the lead. He would keep a steady pace for most of the Stage staying within 4 Minutes off the lead. At the halfway point at km 158, Casey was 2nd, 03:56 behind Aron Domzala. With 20 km left in the Stage Casey would close the gap on Domzala dropping it down to only a minute and 51 second lead going into the Stage 2.

Casey had this to say, “Day 1, it was brutal out there, the course was everything you’d think you’d see at Dakar. We got it all today. We had sand and crazy rocks and sand washes, river bottoms that were just chewed up. Overall, we just had a great time, Sean did a great job. If this is how rally is going to be, this is going to be enjoyable. I’m just glad Day 1 is over because we got eleven more days!”

It was another long liaison to the first bivouac of the rally in Al Wajh. 238 KMs up the coast next to the Red Sea! With a short morning liaison to tomorrow’s stage the drivers get a little bit of extra time to sleep tonight. Stage 2 will also start the mixing of vehicles off the start line. Your start order will be dependent on your overall time on the stage the day before. So you can now have the big T4 trucks starting in front of you and the fast T1 cars starting behind you depending on how they finished.