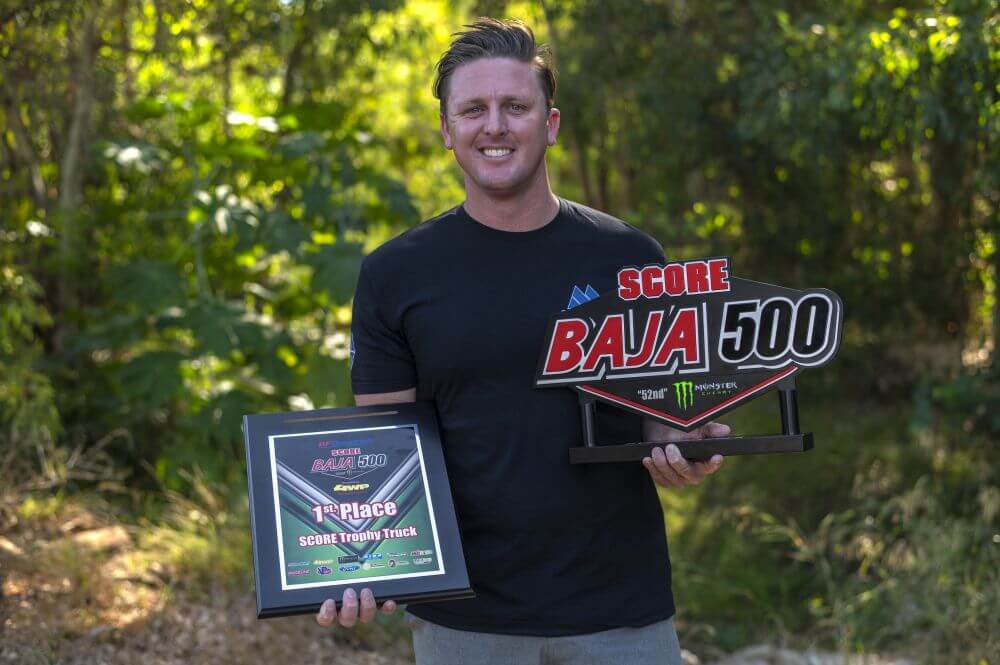 This year has without a doubt been a crazy one, for our country and even the world.  In mid March we found out things we all loved were beginning to be postponed and/or canceled.  Like many people we hoped it would blow over quickly, but as several months went on and more races moving dates, the racers and fans were not sure when the next race would be.  The Baja 500 dates were changed several times, each time another month out.  Finally half way through September the first race in baja was able to take place, the CODE Hechicera Gran Prix.  Not known to be one of the larger races by any means, but it showed promise that the sport was picking back up.  A week later the 2020 SCORE International Baja 500 kicked off, while racers and race fans alike were ready.

Just days after taking home the 1st place overall trophy, we sat down with Dan McMillin to discuss what this win means to him, his family, and the entire McMillin Racing legacy.  Aside from the craziness, the year has been quite good for the McMillin Team.  With Dans younger brother Luke coming in 2nd place during the King of Hammers in February, then taking the top spot in the 2020 Mint 400.  After several months off due to Covid-19 restrictions, McMillin racing took the top spot at the BITD Silver State race, with Luke at the wheel.  Then comes the Baja 500.  A race that has seemingly cursed Dan over the years. After qualifying 4th 3 days prior, it was definitely a confidence booster to remain in great positioning during the 500 mile battle until the checkered flag dropped.

The #23 team consisted of Dan Mcmillin, Justin “Bean” Smith, Brady Thompson, and Rogellio Perieira Jr. Dan explained the many reasons they brought Smith in as a second driver.  “He’s an incredible driver, and brings a lot to the team.”  He went on to say, “A lot of guys are good in qualifying, but have a hard time keeping that pace up in a Baja race.  Many guys don’t have a prerunner or knowledge of the Mexican desert – but Justin does”  Dan explained how amazing Justin’s “Brain to pedal” knowledge is, that it’s quite impressive and the team can really benefit.

“Overall we had a pretty damn good race” Dan said with a huge smile.  “The team had a single flat tire at around RM260, that seemed to come from a super rocky section we previously went through”, he explained.  For quite some time, the top 5 trucks were just a minute apart, and at one point Dan explained that he saw his brother Luke in the rear mirror.  “I noticed he was really pushing to get by, and I knew he could safely so I backed off a bit to let him pass.  Rest assured I wouldn’t be doing that for anyone else.” laughing, but also quite serious.

As 500 mile 130+ mph races through the deserts of Baja go, it seemed Dan and the team had a really smooth going race.  At RM330 Dan handed over the wheel for Smith and Thompson to take it the rest of the way.  With a time of 8:29:16, the team watched the checkered flag drop for the first time that day, and it was all for them.

“We were fortunate to not run into any major mechanical issues, but that’s not to say the course wasn’t incredibly rough.” Dan points out.  He continued, making it pretty clear how brutal the terrain really was, “There were no speed zones, and really no relaxing sections.  Borrego’s terrain is insanely beat up.  We thought there would be some points where things were a bit slow, but nope, it was a completely balls out race. ”

In discussing the race, were there any spots that really surprised you? “Not really, we had a really good pre-run.  We did come into some light rocky spots that were pretty sketch, but we were able to make it through just fine, besides the flat we encountered at another section. I was pretty gentile on things through the rough stuff knowing this was a long race.”

We discussed Dan’s reaction on when and how he found out he took the win.  “Obviously with a large race we have to wait until the dust clears, and every time is tallied up.  It wasn’t until later in the night a few reliable sources had texted me, thinking I got it.” Dan explained that he started to feel really good. Then next morning on Sunday Dan awoke up to an insane amount of text messages congratulating him.  So it sunk in.  Dan McMillin TT23, and the team had gone down to Baja and grabbed the first place trophy!  This also marks the first Baja 500 win for a 4WD Trophy truck, as well as the first win for a Mason Motorsports built truck. Both of these are huge for the sport.

These Baja races have really plagued McMillin over the years, having always come in 4th place, or very close to it. “I think this race yanked the monkey off my back,  we feel a bit more confident going into the 1000.” He proudly exclaimed. Note:  Having finished first in the 500 means he now starts first in the Baja 1000.  It’s also to be noted his brother Luke, finished 3rd in the race, which means McMillin Racing is starting 1st and 3rd in the largest race in Baja, the prestigious SCORE Baja 1000.

We don’t think McMillin receives the credit he deserves.  He is one of the most consistent and smartest drivers on the course.  We asked him if it bothers him that he doesn’t receive the recognition that is due.  He immediately answered like a true sportsman, “No, fortunately I have a very talented brother and cousin (Andy McMillin).  We are all family and a team in off-road racing.”  He continued, “ I do feel that I am one of the most consistent drivers, and I rarely get a DNF (did not finish).  I typically qualify between 10th-15th, I am definitely not the fastest, but I’m consistent that’s for sure.”  Which is completely fact. Something very true that off-road racing legend Larry Ragland once said, “Baja is not a drag race, it’s basically 3000 drag races.”  We all laughed at how true that really is.  An interesting fact about Dan’s driving style: he requests from his team physical splits as opposed to timing corrections, and does the math in his head while he’s driving. A pretty impressive trait to carry as a driver. Imagine doing what some would consider fairly difficult math while driving a 1000HP truck through the desert.

Future Plans After the Upcoming Baja 1000

Once the Baja 1000 is completed, we discussed what any furniture races McMillin might be interested in doing, and immediately Dakar came up.  “I have been to the Dakar race twice, supporting my father (Mark McMillin, off-road legend and Hall of Famer) and Darren Skilton.  I truly think I would be very good in the Dakar circuit.”  We all agreed a 3 car team of Dan McMillin, Luke McMillin, and Andy McMillin coming to the Dakar race, would be in a single word – EPIC.

This was indeed a huge win for Dan, the team, the 4WD engineering, and Mason Motorsports. “These Trucks are getting faster and more reliable.” McMillin said.  It’s truly exciting to see where the enginuity of these machines continue to head. We would like to wish Dan and Luke McMillin all the best going into the Baja 1000 which kicks off Wednesday, November 16th, until then enjoy your Baja 500 succes gentleman, you’re in the record books!