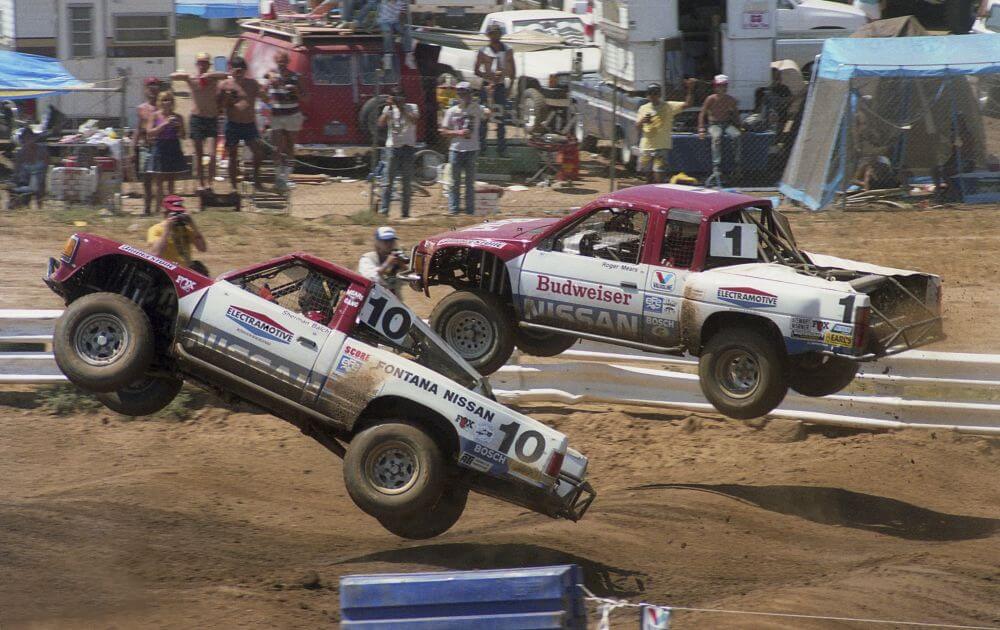 Class 7 dates back to the early days of off-road racing with Datsun entering a 1300cc mini pickup in the 1967 Mexican 1000. Well known female motocross racer Mary McGee was hired to wheel the little pickup down the Mexican peninsula by Pete Brock of BRE (Brock Racing Enterprises). The trucks were bone stock all the way down to the shocks with just a cattle guard mounted to the front bumper and a couple of safety features added. The Japanese manufacturer (Nissan/Datsun) did not want to modify the trucks in any way and they managed to finish 4th in class on their first outing. The Datsun trucks really gained popularity and in the early 70’s, and the class started to gain race entries with the Toyota Hilux, Ford Courier, and Chevy LUV coming onto the scene.

In the mid to late 70’s the small pickups started to see modifications in the form of aftermarket shocks, reinforced suspension components, larger tires, engine modifications, and added safety components. With the popularity of mini-trucks gaining a lot of attention the teams started to bring on corporate sponsors. The likes of Olympia, Goodyear, Firestone, Datsun, Ford, Dodge, Chevrolet, Toyota and others helped bring the class into the limelight. The factory sponsored teams really wanted to prove the durability of their trucks and advertised the trucks heavily with video clips and still images from the “Baja Wilderness” airing on national TV. The mini-truck aftermarket manufacturers were in their off-road heyday from the mid 70’s through the 80’s with Jackman Wheels, Bumpers, & Roll Bars, also KYB & Rough Country Shocks, LOW Manufacturing 4X4 Kits, etc…

The 80’s brought the mini-truck classes to the forefront with the addition of two more classes. Based on the progression of the class 7 trucks now boasting long travel suspensions, 9″ third members, and higher horsepower engines it was necessary to add a class that more resembled in design the original class 7 truck. Class 7-S was born along with class 7-4X4 now that all of the manufacturers offered their trucks in optional four wheel drive platforms. It could be argued that there were a couple more classes if you included the Nissan Celebrity Cup trucks and the new specialized short course truck classes that were being campaigned in the Mickey Thompson short course series and at the Riverside Off-Road World Championships.

With the 80’s in full swing in the desert (HDRA & SCORE leading the way) and Mickey Thompson running the Stadium Series, some popular names were starting to emerge. The likes of Roger Mears, Manny Esquerra, Sherman Balch, Larry Ragland, Ivan Stewart, Danny Thompson, Rod & Steve Millen, Spencer Low, Scott Douglas, etc… Looking back, the mini truck classes really brought some key names into the limelight and who could forget the Roger Mears vs Manny Esquerra battles in the desert! Arguably class 7, 7-S, & 7 – 4X4 reached their pinnacle in the mid to late 80’s with a kings ransom of factory money being spent on the desert and short course programs. Some manufacturers supported multiple classes in a bid to win multiple championships in the various classes. Race wins sold trucks and the bragging rights were hotly contested!

Entering the 90’s the factory money was thinning but many racers continued campaigning mini-trucks that had now become mid-sized trucks. Most notably, Scott Douglas forever left his mark on the off-road racing world winning the 1993 San Felipe 250 overall while campaigning the class 7 Herzog Ford Ranger! Although there are a few class 7 racers still racing, the class has left it’s mark on the off-road racing world’s history books.

The “Lil Oly” Datsun of Jim Conner running through a wash during the running of the 1979 Baja 500. Jim Conner was one of the original Datsun specialists that built race trucks and pre-runners. Jim is credited for exposing desert racing to the world by involving well known racers from other disciplines such as NASCAR racer Hershel McGriff and East African Safari Rally champion Shekhar Mehta.

The Alesi family raced a Ford Courier in the early to mid 70’s and was a real grass roots team. Sponsored by the family business Alesi Plumbing, Carta Blanca, and the local 76 station in Lemon Grove, CA. Peter Sr, Mario, Peter Jr, & Anthony all raced together in many classes through the years and now a third generation, Alesi is racing the Vintage Class (Peter III) Here Mario and Peter Sr are on their way to winning the 1975 Baja 500 in class 7.

Footnote: As a budding photographer of 11 years of age Mrs. Alesi was my first customer purchasing a 8×10 black & white image of their race truck. I remember her taking the $3.00 out of the register at Alesi Plumbing to pay for it. I hope the drawer balanced that day!

Roger Mears in the factory Nissan on his way to winning the 1986 Baja 1000. Roger won many races and championships through the years in various classes, but class 7 was one of his winningest classes.

Manny Esquerra in the Stroppe pit during the running of the 1985 Baja 500. Manny was a multi time class 7 champion that battled for many wins against Roger Mears through the years.

Glenn Harris crossing the creek at Mike’s Sky Ranch during the 1984 Baja 1000. Glenn ran a Rotary engine in this particular truck with an open exhaust. I could hear the truck coming for miles as he would wind his way up the mountain!

John Baker brought Dodge/Mitsubishi into class 7 with the D-50 pickup. Always meticulously built and prepared, John would win his fair share of races. Here he is seen running the 1979 Baja 500.

Continuing his ways in class 7, Mario Alesi is seen here piloting the Jim Conner Nissan during the 1985 Baja 500. Mario was a hired gun taking the Nissan truck to many wins during his stint with Jim Conner.

Mike Leon of Mikes Sky Ranch fame is seen piloting the Isuzu class 7-S pickup just leaving the BFGoodrich pit at San Matias during the running of the 1985 Baja 500 where he would score a class win. It was a very hot race with inland temps running 118-119 degrees!

A very early image of Manny Esquerra running a Ford Courier at the 1979 Baja 500 with the well known Los Arcos family owned restaurant out of Parker Arizona as the main sponsor. Manny would go on to factory Ford sponsorship and always relied on Bill Stroppe and team to build and prep his top notch equipment.

Part of the evolution of class 7 were the purpose built short course trucks that ran the Riverside Off-Road World Championships as well as the Mickey Thompson Stadium Series. Here Nissan teammates Roger Mears and Sherman Balch battle through the whoops just off of turn 6 at Riverside International Raceway during the 1986 race.

The class 7 entry of Roger Mears and Brent Foes waiting it’s turn at contingency row during the 1985 Mint 400 in Las Vegas. The team was always a well run group that was professional but always had fun!

Scott Douglas and co-driver Jeff Howe in the Herzog Ford Ranger getting some attention in the BF Goodrich pit. Scott would take this truck to an unprecedented overall win in a class 7 truck at the 1993 San Felipe 250!

At the finish line of the 1979 Baja 500 with Jack Lee and Jim Travis. The duo would pilot the class 7 Datsun pickup to the class win with what looks like duct tape, bungee cords & bailing wire! They ran Bandag retread tires and managed to win the Mint 400, Baja 500, & Baja 1000 in the Datsun pickup sponsored by Frontier Towing, Arizona Desert Rat, & Jack Furrier’s Western Tire Centers.

Who the hell is Jose Abelardo Grijalva Previous post
Best in the Desert Vegas to Reno: Event Preview Next post