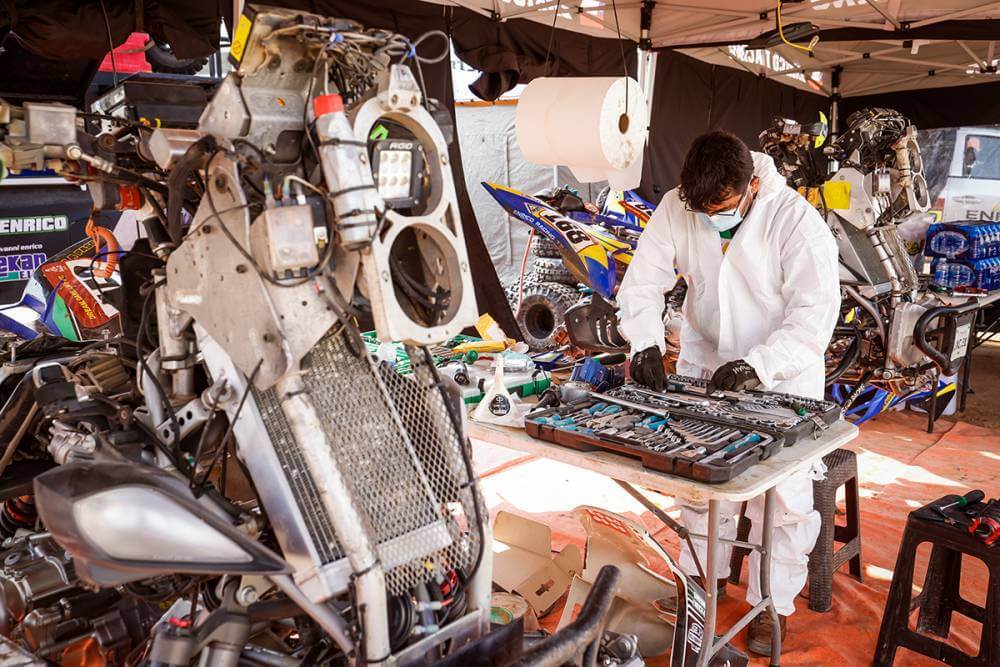 Key points:
Ø 231 vehicles (78 motorbikes, 14 quads, 56 cars, 49 lightweight vehicles and 34 trucks) out of the 286 cleared to start the race in Jeddah have survived a prologue and six stages and made it to the rest day. A further 26 vehicles have withdrawn from the race but remain eligible to continue the adventure under Dakar Experience rules without appearing in the general standings.
Ø As different scenarios unfold, the titles at stake are still up for grabs in the five categories, but the current leaders have taken at least a few steps forward: biker Toby Price, quad rider Nicolás Cavigliasso, car driver Stéphane Peterhansel, lightweight vehicle driver Aron Domżała and truck driver Dmitry Sotnikov have the advantage going into the second week.
Ø The 23 vehicles in the Dakar Classic category overcame the challenges of the first week. Marc Douton and his Sunhill buggy lead the regularity race.

Motorbikes: Price holds tenuous grip on race lead
A dozen riders are still in with a shot as the race heads into its decisive second week. A mere quarter of an hour separates the top 10 halfway through the rally. Defending champion Ricky Brabec is thirteenth overall, but only 19 minutes down on the leader, which makes the Hondarider still a force to be reckoned with in the final week. Brabec made a series of navigation errors in the first few stages after claiming the prologue, but the American has remained in contact with the leading group without pushing his Honda too hard or burning through the six rear tyres allocated to each elite biker for the entire race. The 2016 and 2019 champion, Toby Price, is in control of the general standings. The KTMrider stayed as cool as a cucumber throughout a series of specials in which navigation turned up the heat on the competitors. Honda has placed two riders, Kevin Benavides and “Nacho Cornejo”, right behind the Australian and in perfect position to pounce on any mistake the leader may make at 2′16″ and 2′57″ back, respectively. The Argentinian put in a heroic performance in stage 5 from Riyadh to Al Qaisumah, soldiering on to victory despite crashing and hurting his nose and an ankle after cresting a dune. Meanwhile, the Chilean has found his rhythm after a cautious start to the rally and is now racking up one top placing after another.

Joan Barreda, the fourth Honda biker, sits in seventh place despite a string of navigation errors and has taken three stage wins so far, bringing his career tally to 27 and making him the third most prolific Dakar biker of all time, behind Stéphane Peterhansel and Cyril Despres, tied with 33. Xavier De Soultrait is fifth overall after six stages after a series of consistent performances near the front of the race. The Frenchman, now riding for Husqvarna and chasing Ross Branch in the general standings, even had a brief stint in the lead, as did American Skyler Howes, currently eighth. Daniel Sanders also flew the flag for Australia in the opening week, landing three stage podium finishes (including the prologue), sitting in 12th position 18 minutes behind his older countryman, and comfortably leading the rookie classification. On the other side of the coin were Andrew Short, who was knocked out of the race very early by an issue with fuel, and Matthias Walkner, who lost 2 and a half hours to a clutch problem in stage 2.

Quads: Cavigliasso in the lead but not in the clear
Ignacio Casale’s departure to the truck category has left a power vacuum and encouraged a host of contenders eager to fill it. One man, Nicolás Cavigliasso, stands out from the rest. The Argentinian, who sat out the 2020 edition after claiming the 2019 Dakar with nine stage wins to boot, got back to his winning ways in stage 3 and has since finished every single stage on the podium, even when faced with the challenge of opening the way. Yet it was Alexandre Giroud who dominated the start of the race, winning the prologue and the first stage before running out of steam a bit. Following a series of mechanicals, navigation errors and a herd of sheep in his way, the Frenchman is sitting in third place overall, about 45 minutes behind Cavigliasso, with another Argentinian, Manuel Andújar, sandwiched in between. Andújar came in fifth in 2019 and went one better last year, when a stroke of bad luck dashed his hopes of finishing on the podium. Just over half an hour behind his countryman in the general standings, Andújar remains a real threat for the title, much like Giovanni Enrico, fourth at under an hour back. However, Pablo Copetti and the next few riders in the classification face a much bleaker picture. The Argentinian-American won the second stage, but a mechanical during the fourth special sent him crashing down the general standings, where he now sits in fourth place almost 2 h 30 back.

Cars: dancing on a razor’s edge
The men on the final podium of the 2020 Dakar lined up for the start of this year’s edition in Jeddah with the confidence that comes from being one of the big favourites. Fast-forward one week and the protagonists are still the same, but the roles have changed. Struggling to adapt to what he calls “the new roadbook philosophy”, Carlos Sainz has made a series of navigation errors that have pushed him down to third place in the general standings, 40′39″ behind Stéphane Peterhansel. The collector of Dakar records is well aware that victory is far from guaranteed on the rest day, not least because he is just 5′53″ ahead of a rival as fast and aggressive as Nasser Al Attiyah. The Qatari has been as unerring as “Peter” throughout the opening week, claiming four victories (including the prologue) and ratcheting up the pressure on the overall leader. He has a knack for pushing his rivals until they crack. Whatever the weather is like on the road to NEOM and then Jeddah, expect the heat to rise in the competition stage after stage.

But… what about the men billed as dark horses at the start of the race? X-Raid and Toyota could only look on helplessly as Jakub Przygońskisank to fourth overall at 1 h 11 (although he remains in contention for a podium spot), Orlando Terranova threw in the towel in stage 5 due to an electrical problem, rising star Henk Lategan tumbled out of the Dakar after two stellar performances in a row, Yazeed Al-Rajhi broke his gearbox and his heart in stage 3, and Bernhard ten Brinke also crashed out of the race. Bahrain Raid Extreme is still banking on Nani Roma(fifth at 1 h 37) to catch up with the leading trio, but Sébastien Loeb is out of the running after making several blunders and breaking a wishbone, which meant an unscheduled night in the desert for the French driver and sent him plummeting to 45th place overall, 11 h 34 behind his old stablemate at Peugeot. Mathieu Serradori has a similar tale to tell after slipping down to 50th place despite a string of provisional podium finishes, while his equally ambitious teammate Yasir Seaidan languishes in 38th place. Not everyone can go the distance.

Lightweight vehicles
The competition is fierce in this category, as proved by the list of stage winners, which features six different victors in seven specials (including the prologue). “Chaleco” López is the only former champion on that list and the only driver to score a brace so far. After leading the rally for four days, a mechanical forced the Chilean to surrender the lead to Aron Domżała, who now holds a slender margin of 4′46″ over Austin Jones. While Can-Am is firmly in command of the race, Team RedBull’s OT3s have twice made history in the opening week: first with Cristina Gutiérrez, the first woman to win a Dakar special since Jutta Kleinschmidt in 2005, and then with Seth Quintero, who became the youngest stage winner in the history of the rally yesterday at the age of 18. Not only that, the California Kid is now third overall!

Trucks: Karginov messes up, Sotnikov takes over
Andrey Karginov went from ruling the 2020 Dakar with an iron fist to probably losing the 2021 edition on day one. The Russian’s crew lost over an hour and a half to a mechanical problem in the first stage, leaving him countin’ on a miracle to retain his title. However, Kamaz showed the depth of its roster as Dmitry Sotnikov rose to the occasion and took over from teammate Karginov. Sotnikov has finished in the top 2 in every single stage in a display of consistency that has put him half an hour clear of the rest of the field at the top of the general standings. Following the withdrawal of Siarhei Viazovich, who finished third last year, Karginov may well end up wondering who needs enemies with friends like his, as Andrey Karginov tries to stage an epic comeback, Ayrat Mardeev seeks to follow up on his first stage win since 2018 on the road to Ha’il,and Anton Shibalov attempts to build on his four podium finishes in six stages and second place overall.

King of the Hammers