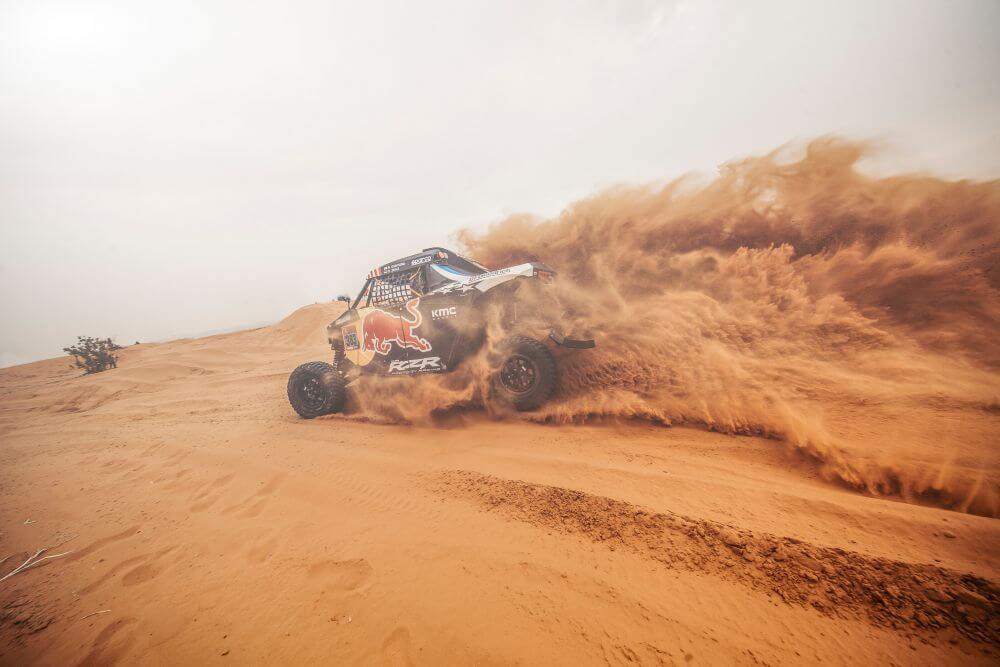 The Red Bull Off-Road Junior Team have reached the halfway point of the 2021 Dakar Rally with two stage wins and spot on the overall podium. There’s still plenty of hard work ahead on the second week of the rally, but the young team have given themselves an excellent platform for further success.

The performances of 18-year-old Seth Quintero in the first week of the Dakar have shook the bivouac. The headline news is that the teenage rookie has become the youngest ever Dakar stage winner thanks to his victory on day six. Seth also holds third place in the Lightweight Vehicles general classification, just 8m26s back from race leader Aron Domzala.

“It’s been crazy since getting the win on Stage Six. I’ve had an overwhelming amount of support from everybody back home. It’s really hard to take it all in because there’s so little downtime at the Dakar.” – Seth Quintero

What’s just as impressive as Seth and co-driver Dennis Zenz’s stage win and overall position is their consistency during this first week at the rally. The Dakar debutant has not finished outside the Top 10 on any of the six stages so far in Saudi Arabia.

Things got off to a flying start for Cristina Gutiérrez as she took a win on Stage One and wrote some history of her own. Cristina’s stage win was the first by a female since Jutta Kleinschmidt secured the last of her 10 stage wins at the Dakar in 2005.

“I have been racing for 11 years now and this is the first time I feel such strong support. The strong team around me gives me a lot of power everyday to continue.” – Cristina Gutiérrez

Since winning Stage One things did not always go smoothly for Cristina and co-driver Francois Cazalet in the first week. On Stage Six they was stuck on the stage with a broken jack until fellow racer Wayne Matlock stopped his Polaris to help them get moving again. The time lost saw the Spaniard slip to 10th overall.

The biggest disappointment of week one has been felt by Mitch Guthrie Jr. and co-driver Ola Floene, especially on day six when an issue with engine oil pressure prevented them from starting the stage. Mitch arrived back in Saudi Arabia after winning two stages 12 months ago and was hoping for even better results this time around.

“This is a team sport and even though I’ll not be on the stage pushing along with them, I’ll here at the bivouac ready to do anything I can to help Seth and Cristina.” – Mitch Guthrie Jr.

In the first week Mitch had already shown his team spirit when he sacrificed a potential stage win to wait back for Cristina on day three. Now Mitch’s plan for the second week is to stay in the bivouac to offer any help he can to his team-mates. His experience of racing his OT3 at the last Dakar will be invaluable as the team target a successful conclusion to the rally.

The time for resting is over tomorrow as the Dakar starts up again with the Marathon Stage. The drivers will be separated from their mechanics overnight and forced to make any repairs required themselves after racing for 471 kilometres to Sakaka. Drivers will have to make sure they’ve fixed up their machines perfectly because on Monday there’s another 375 kilometres of timed special stage on the way to Neom. Things aren’t getting any easier at the Dakar!