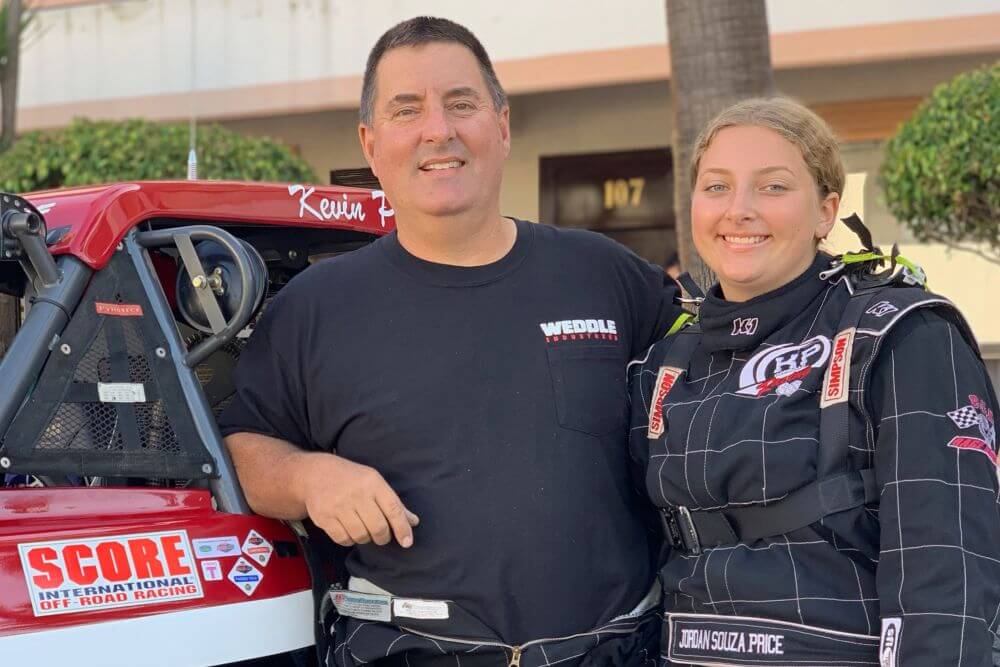 At just 16 years old, Jordan Souza Price’s off-road racing career is off to a full-throttle start. While many kids her age are uncomfortable behind the wheel of any vehicle or while they practice for their drivers license test, Jordan already has 2 years of high intensity/high speed racing under her belt, not only as a co-driver but as a driver as well. She was even the co-pilot in one of the largest off-road races on earth, the famous Baja 1000. With the help of TSCO Racing and sponsors, a Trophy Truck Spec is in the near future for Jordan Price, and KP Off-Road Racing!

So how was this wild plan born? Where did it all start? We’ve all seen the father/son race teams, but there is something special about a father/daughter team.  Jordan’s father Kevin, an avid off-road racer himself was raised around offshore boat racing, but soon found himself living next door to racing legend Rick Mears. Kevin was introduced to off-road racing by Rick, which completely grabbed his full attention and eventually Kevin went on to start KP Off-Road Racing in 2015. The boat racing soon stopped and Kevin was told by friends that the Baja 1000 would be a great adventure for the entire team, if he really wanted to give it a try.

The family, including Jordan’s mother Carrie and 2 sisters Caitlyn and Madison who are all deeply involved with off-road racing, soon made their way south to Ensenada, Baja California – when Jordan was approached by 2017 Dust 2 Glory Film maker, Dana Brown.  She was asked if she would ever be interested in racing, and she adamantly replied “No” in the film, she was 13. Ironically, soon after she began begging to race after seeing how truly exhilarating it can be. Starting out as co-pilot with her sisters in the team’s  ½ 1600 car, it didn’t take long before she began co-piloting with her father Kevin.

Kevin Price explains in great depth how truly calm Jordan is as a co-pilot. “She makes me a better racer by continuously calming me down during a race.”  He went on to say how much the team appreciates her calm demeanor over the radio as well. If you have ever been on the radio during a race I’m sure you can understand the importance of clear calm communication.

Then, in a 2018 Baja race things quickly went from going great to hectic when Jordan and Kevin suffered a fuel cell malfunction. The malfunction caused boiling race fuel to spill all over the car during the race.  The fuel cell was located directly behind where Jordan was sitting and understandably, she screamed out in pain.  Kevin and the race team repeatedly asked if she wanted to stop the race, and each time she replied “No, let’s keep going!” as it’s always been her spirit.  As a father you could imagine the tough decision whether to continue or throw in the towel for his daughters safety.  The race was complete, they packed up and hit the road, while everyone was still deeply concerned for Jordan’s health.

Once they crossed the border into the states, Jordan lost consciousness due to the level of pain she was enduring and immediate medical attention was administered. It was soon found that she had suffered 2nd degree burns over 70% of her body. After this occurred Kevin contemplated calling the entire race team off, as emotions were running very high.  Thankfully, after 5 months Jordan made a full recovery, but as you can imagine it’s something that will always be in the entire family and team’s mind.

Next, Jordan began driving circle track dwarf cars in the RWDCA (Redwood Dwarf Car Association) in 2019.  She showed everyone that she came to win, and would take “Rookie of the Year.” It is clear she has a real knack for this type of racing and is truly thriving within the sport.

As 2020 rolled in, Jordan was mentally reset as she hopped in the driver’s seat of the team’s ½ 1600 car to battle the 2020 BFGoodrich Mint 400. It was a brutal race for every team, but her father explained, “She seemed to be a complete natural on the manual transmission.”  She started in the rear, and eventually finished in 3rd. Which is a pretty amazing accomplishment to complete “The Great American Off-Road Race” in the tough Nevada desert – especially with a 55-60% finishing rate.

As her racing career is now in full swing, Jordan has been taken under the wing of fellow female off-road racer and multi-winning Polaris RZR factory driver and champion Kristen Matlock of the UTV class. Her husband Wayne is also a 20+ year veteran racer and Polaris RZR factory driver of our sport, so it’s no wonder why Jordan looks up to Kristen so highly.  Jordan initially reached out to Kristen with many questions about racing and the challenges that come with it both physically and mentally, especially being a woman in the sport. Kristen and I discussed Jordan’s young career, and her future in the sport.  “Jordan absolutely loves racing, and she has such a strong passion for it.” Matlcok went on to explain, “She truly has the talent, if she continues to remain calm and focussed – she will make an huge impact in the sport.”

Both Kristen and Jordan shared a great moment as they teamed up during an autograph session just before the 2020 BFG Mint 400. It’s evident that Kristen sees something really special in Jordan and is so proud to help her in any way.“I like her attitude a lot!” Kristen happily shared.

We now have a bit of insight on Jordan and her father’s racing, so let’s talk Trophy Truck Spec  baby! After racing for a few years, Kevin Price has built friendships and relationships with some very prominent people within the community. The decision was made to go BIG or go HOME! TSCO Racing has taken on the build.  While TSCO is located in Southern California, Kevin owns a marine business in Northern California where the family lives. The build is set to begin in June of 2020, and if all goes as planned will be completed by December. Of course they will be making many trips south to become very acclimated with the build. As Kevin explains, “Jordan needs to know this entire truck bumper to bumper.” He also revealed that Jordan is even in the process of learning the art of tig welding. With brands like King Shocks, CBM Motorsports, Rigid Industries and Method Race Wheels already onboard the build, they look to continue to grow relationships with more sponsors.

We are so thrilled to see what the future holds for Jordan, Kevin, the family, and the entire KP Off-Road Racing team.  We are looking forward to watching more of this father/daughter team in the coming future. With the determination they seem to possess, it looks to be an exciting future. Not too many 16 year old girls pilot a 5,000lb, 500hp monster.  So stay tuned!

I would also very much like to wish Kristen Matlock all the best as she looks to once again “Iron-Woman” the Baja 1000 this year!