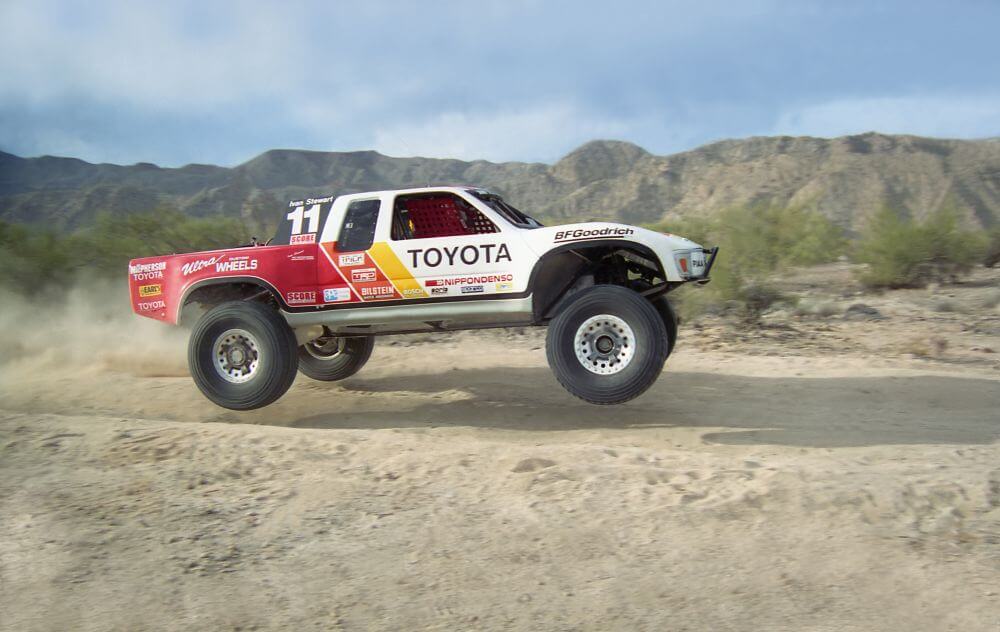 Much has been written about Ivan Stewart, perhaps more than any other off road racer on the planet! So why would I choose to write about Ivan when his story has been told so many times and so eloquently? WelI, I grew up in San Diego’s east county and was baptized by dust into off-road racing at a very young age. I am not writing about Ivan from the perspective of a writer that Googled Ivan’s race wins and career notes. I am in fact writing from the perspective of a photographer that had the pleasure of shooting images of Ivan from his twenties in his Modern Motors Funco single seater all the way into his fifties in a Toyota factory ride.

Although Ivan became a fan favorite very early in his career, his grit and determination defined him early on. Given all of Ivan’s accolades I just knew him as a fencing contractor from neighboring Lakeside, CA. How Ivan went from the weekend racer to a factory driver that won more 4 wheel Baja 500’s than anyone, racking up a win list longer than my arm, being inducted into the Motorsports Hall Of fame of America, the Off-Road Motorsports Hall of Fame, the San Diego Hall of Champions, and authoring a book is a true home town success story!

Ivan set the stage for his success very early in his career with sheer determination and the ability to “listen” to the racecar. Having learned how to drive as fast as his equipment would allow without breaking it was the key to his success. When we talk about “sheer determination” were talking about racing hundreds of miles or more with very limited wheel travel, no radio, no GPS, weak lighting at best, and in Ivan’s case, an open face helmet driving solo. (the aforementioned were a couple things Ivan never gave up!) Having mastered these challenges in the early days was a real advantage as Ivan stepped up into the factory sponsored world of the PPI Toyota’s in the early 80’s.

Throughout his career and up to today, Ivan has remained an easily approachable gentleman that gives his time freely to his many fans, whether it be a short chat or an autograph, he always takes the time to pay it back. In many ways I feel it’s best to let the remainder of this story be told through a few of my images that reflect three decades of racing. The images here represent just a few of mine over those decades of racing and I do have to say that I really enjoyed watching and photographing Ivan over those years!

“Coming in Hot” Ivan coming into a checkpoint during the 1975 Baja 300 run by BRA (Baja Racing Association) where he would take the overall win in his Modern Motors class 1 Funco. You gotta love the glass Uvex goggles and the silt covering Ivan’s face!

Ivan flying by during the 1977 Baja 500 in the Modern Motors Chenowth 1000. Ivan would go on to win this Baja 500 and many more throughout his career.

Ivan grabbing a cool drink of water while keeping an eye on me at the finish line of the 1979 Mexicali 250 in the Class 8 winning Fillmore Ford. (probably wondering how did that kid get inside the ropes?)

A finish line image of Ivan at the 1979 Baja 500 where I believe he finished second to Dale Sexton while driving the class 8 Fillmore Ford with Coco Corral riding shotgun.

The only competitor to  put it up on two wheels in the wash outside of Tres Hermanos during the 1980 Baja 500. I’m sure Coco had a blast riding shotgun! Ivan would win class 8 and this would be the last Baja 500 that Ivan would pilot the Fillmore Ford.

The 1985 Mint 400 put Ivan in the seat of the class 1 #001 Toyota chassis a year after winning class 7 at the same race. With Cal Wells having assembled the PPI Toyota team it would not take long for Ivan to dominate in the Toyota!

Ivan at a prolonged pit during the 1985 Baja 500 with Cal Wells and team tending to the truck. This race was a scorcher with inland temperatures in the 120 F range and was one of the few Baja 500’s that Ivan did not win.

Ivan coming into a checkpoint during the 1985 Baja 500 prior to entering the pit for a prolonged stop.

Ivan spending some time in the air during the running of the 1993 San Felipe 250. This would be the last year of running in class 1 as the team would make the move to the Trophy Truck class in 1994.

Ivan hauling the mail during the inaugural Trophy Truck race at the 1994 San Felipe 250.

At the finish line of the 1994 Baja 500 in Santo Tomas with Ivan celebrating his overall four wheel victory in the Toyota Trophy Truck! This was one of many that Ivan would go on to win in his career.