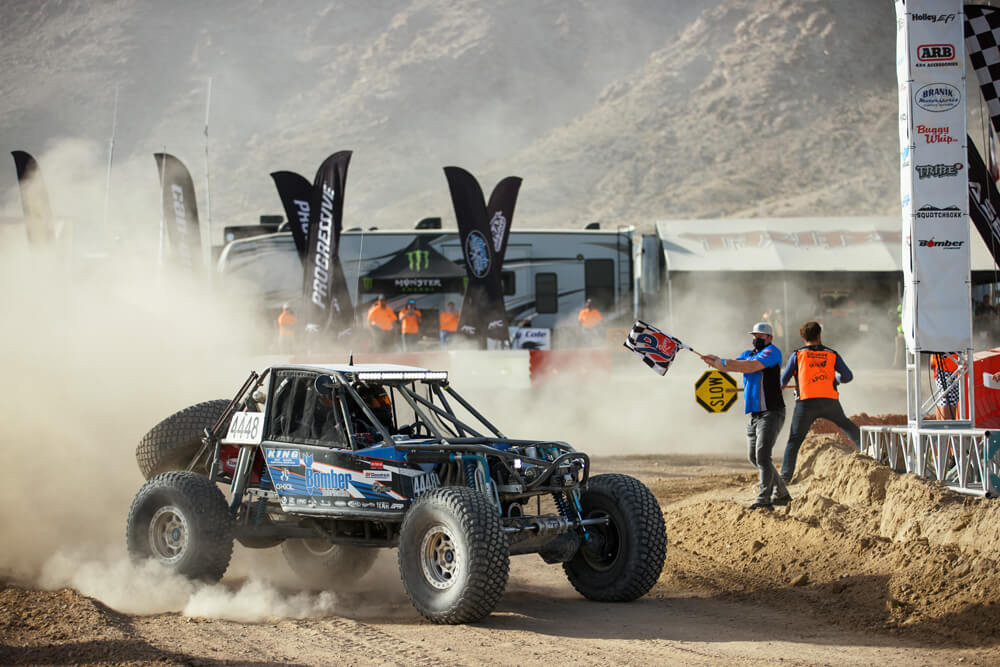 King Shocks Sweeps Podium at King of the Hammers

King Shocks and King of the Hammers go together for far more reasons than a common name. For one, there’s no better place for The Leader in Off-Road Shock Technology to prove the performance and reliability of the world’s premier off-road shocks than one of the most grueling off-road races in the world, with challenging rock sections, high-speed desert terrain, and an ever-evolving set of obstacles throughout the 14-hour race.

For two, this year’s KOH podium featured a clean sweep for racers on King Shocks, with Randy Slawson leading brothers JP and Raul Gomez across the finish line. It was Slawson’s record-tying third King of the Hammers win as a driver, his first since 2015, and allowed him to claim more than $70,000 in cash and prizes, including an $8,000 contingency bonus from King Shocks for the victory.

“My year begins and ends in February,” said Slawson. “It’s not in December, like everybody else’s. King of the Hammers is like the only thing that I live, eat, breathe, sleep, dream, you know. I spend more of my time and more of my money getting ready for this than I think anybody does. We’ve been backed up by the best in the business, like King Shocks, and it’s really been a pleasure working with them over the years. They have been a key part of my continued success.”

JP Gomez started the race on the pole, but the 190-mile challenge featured numerous lead changes across its three laps. In the end, Slawson and the Gomez brothers were the only three drivers to complete the event in under eight hours, even as Raul Gomez briefly stopped on course to assist another competitor who had crashed.

“We’re thrilled to have swept the podium at this year’s King of the Hammers,” said King Shocks President/Owner Brett King. “Huge congratulations to Randy, JP, and Raul for locking out the top three spots this year, and a ton of other teams running King Shocks also did a tremendous job conquering this year’s course. KOH is the ultimate test of off-road technology every single year, and we work hard to engineer quality products that don’t just have what it takes to make it to the finish, but make it look effortless. We’re proud of all the King racers who ran this year’s event, and can’t wait to defend all three podium spots next year!”
Racing, prerunning or just having fun, whatever your application; King Shocks has the shock for you with the performance, reliability, precise tuning and adjustability you need. King Shocks, The Leader in Off-Road Technology!

Photo Credit: Larry Chen
About King Off-Road Shocks
King Shocks is a world-class manufacturer and servicer of custom made adjustable and rebuildable automotive shock absorbers and performance racing products for utility vehicles, OEM replacement and professional racing use. For over twenty years King Shocks has taken pride in putting quality, performance and customer service above all. Every product sold is the result of constant testing and development done with top racers in competition worldwide. This real world testing exposes their designs to a level of abuse and destructive forces that cannot be duplicated in a laboratory. King Shocks, The leader in Off-Road Shock Technology.