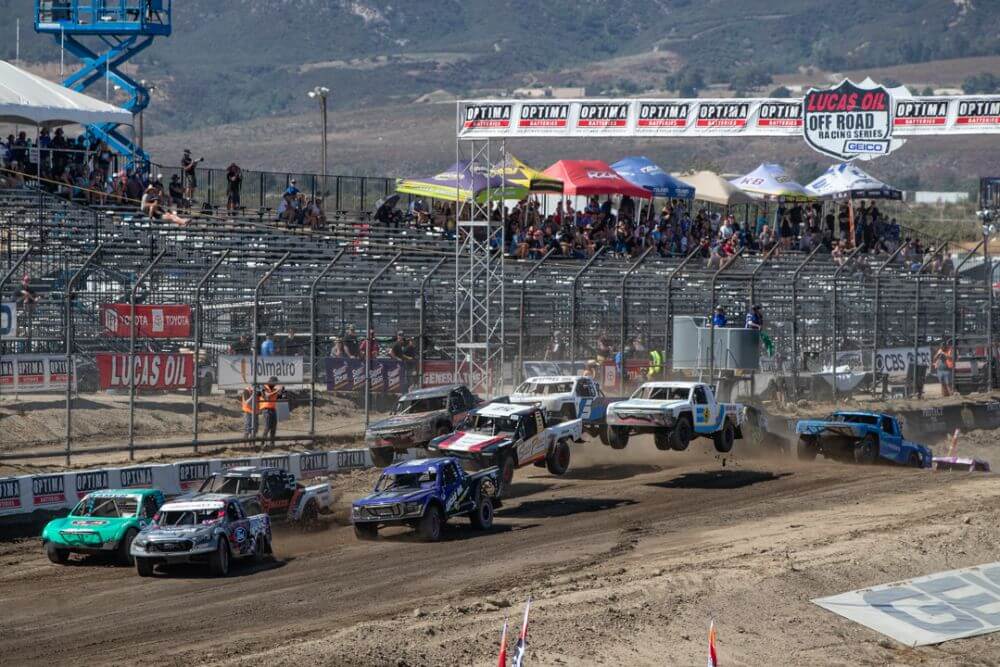 The Lucas Oil Off Road Racing Series returns to its longest track this weekend. The contest at Lucas Oil Speedway in Wheatland, Mo., is significant for both the fact that the track fell off last year’s schedule after suffering heavy storm damage and because, for the first time, the series will conduct three races over three days.

In an effort to run a full season after months of shutdown due to the COVID-19 pandemic, the series elected to make the Lucas Oil Speedway weekend a triple header. Combined with two rounds to open the season last month at Glen Helen Raceway, that means that five of 10 scheduled rounds will have been completed at the end of the weekend, so this is a big one. If someone wads up a car beyond repair on Friday, their championship hopes could be finished.

The short course off road track at Lucas Oil Speedway is not only the longest, but it features both some of the fastest and slowest turns, the biggest jump, and is also the only track with a crossover. It’s very different from any other track on the schedule which, for 2020 and as the schedule stands now, includes only Glen Helen and Wild Horse Pass in Chandler, Ariz.

That makes any predictions based on what happened at Glen Helen speculative at best. That may be more true in Pro 2 than anywhere else, where not only are there some relatively fresh faces, but two of the top runners will be showing up in Wheatland with new trucks. Jerett Brooks all but dominated Pro 2 at Glen Helen, winning both races. But he did it in last year’s choked-down Unlimited truck. He’s showing up with his new truck built to the Midwest-spec rules. Likewise Doug Mittag, expected to come with a Midwest-spec truck as well instead of the Unlimited he borrowed from Brandon Arthur for Glen Helen. Beyond that, the questions include whether Ryan Beat can get the results to go along with the speed he showed in California, and can Ricky Gutierrez maintain the demonstration that he’s ready to race with the best that he exhibited at Glen Helen? As well, Brian Deegan demonstrated his podium prowess in SoCal; is he ready to return to the top step?

Christopher Polvoorde made a statement at Glen Helen with a win in Race 1 and a pole for Race 2, but a misstep in the second race meant no finish for him and max points for Cole Mamer. Polvoorde will be looking to make that up in Wheatland as he looks to get past Brock Heger, surprise rookie Madix Bailey and Mamer to claim his first Pro Lite title. Bailey had two thirds in California; and Heger and Ronnie Anderson split the second-place finishes. Along with Jimmy Weitzel, it’s looking like the Pro Lite field is quite deep in 2020.

Two drivers scored their first Pro Buggy wins at Glen Helen, indicating that this season may be a fun one to watch in that class. Matt Brister won on Saturday, with Trey Gibbs taking victory on Sunday. That left three-time champion Darren Hardesty and defending champ Eliott Watson winless in the opening weekend, although both showed that will be the exception for the rest of the year. Desert racer Dale Ebberts also showed promise in his short course debut in the national series.

The UTV contests have proven to be much as might have been predicted pre-season: Corry Weller dominated the Turbo class, while Brock Heger and Myles Cheek split the victories in Production 1000 at Glen Helen. If they can carry their momentum through the Lucas Oil Speedway rounds, it will be tough for anyone else to make it much of a contest for 2020.

Unlike at Glen Helen, where there series ran without spectators but offered a livestream of the races on Facebook, spectators will be welcomed in Missouri, which has not been as hard hit with COVID-19 as California. Gates will open for spectators at 10 a.m. each day, with the junior races starting at noon and the opening ceremonies and pro races beginning at 2 p.m. The races will be streamed on Lucas Oil Racing TV.