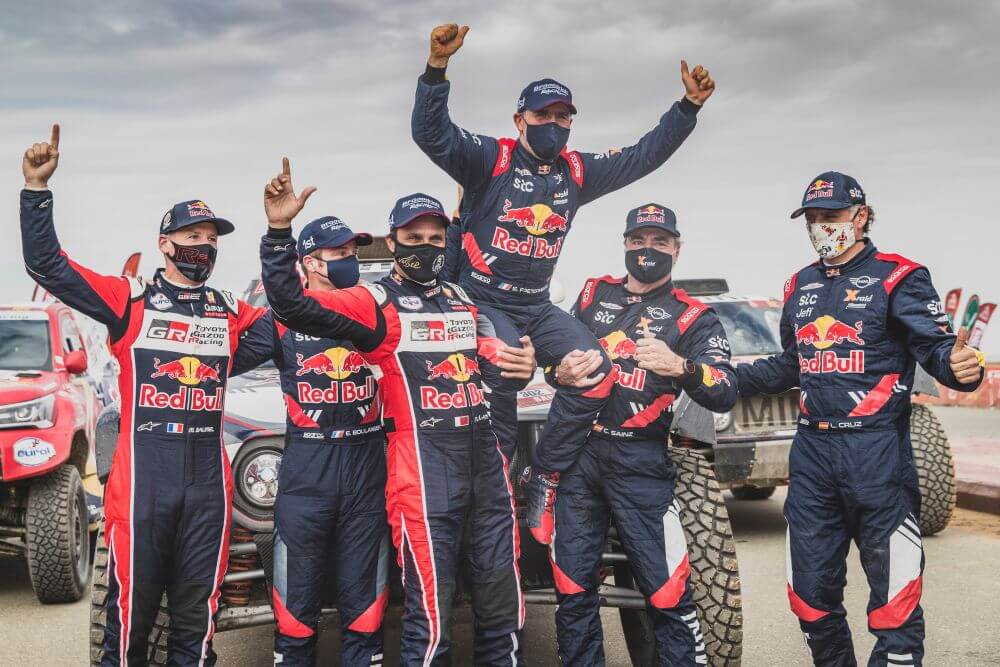 A stunning end to the 2021 Dakar Rally has seen the history books rewritten by the Red Bull Desert Wings. After an 8,000-kilometre odyssey over the sand dunes of Saudi Arabia there is a collection of new Dakar records to report. Here’s your guide to who did what at the latest edition of the world’s toughest rally.

The man they call Monsieur Dakar has once again won the rally! 30 years after his first victory at the Dakar it’s Stéphane Peterhansel on the top step of the podium. That’s now eight victories behind the wheel of a car to add to the six wins the Frenchman claimed in the bike category.

Peterhansel now stands alone as the biggest winner in a single category thanks to his eight car race wins. Monsieur Dakar had previously shared that record with Vladimir Chagin who won the truck race seven times for Kamaz.

Peterhansel and co-driver Edouard Boulanger took the lead of this Dakar on Stage Two, and their MINI Buggy held onto it ever since. 14-time Dakar winner Peterhansel admitted that leading for so long added pressure and also praised the work of his new co-driver.

“It was a really tough one this year and there is always more pressure when you are the leader for so long. We had everything to lose but we did a really precise race, almost perfect. The key this year was avoiding those big mistakes. It’s working really well inside the cockpit, it’s a good feeling to have Edouard sat next to me. This was his first Dakar in a top car and he did a really excellent job.”– Stéphane Peterhansel

Despite winning six stages in his Toyota Hilux at this Dakar it was still not enough to give Nasser Al-Attiyah his fourth overall victory at the rally. Al-Attiyah alongside co-driver Mathieu Baumel in their Toyota Hilux pushed Peterhansel all the way, eventually settling for second overall and a ninth podium finish at the Dakar.

“I’m a little disappointed to finish second, but also grateful that we could finish the race. I’m really proud of the work we have done as a team, from when we started until now. I’m sure we’ll be even stronger next year and we can have the victory.”– Nasser Al-Attiyah

Carlos Sainz and co-driver Lucas Cruz got the defence of their 2020 Dakar title off to the best possible start with a win on the prologue. However, time lost navigating the route – especially on Stage Three – ultimately cost the pair a shot at victory. In the end it was third place for Sainz’s MINI Buggy at his 14th Dakar drive.

“I’m happy for the team and happy for Stéphane, I think he did a really fantastic job. He deserves his victory, that’s why they call him Monsieur Dakar.”– Carlos Sainz

Next up it was Kuba Przygoński and co-driver Timo Gottschalk in fourth overall. The pre-race aim of Przygoński was to match the pace of the top contenders in his Toyota Hilux and his end result certainly proves he was able to do it.

“We’ve finished a tough Dakar in fourth place. The terrain was really tough, everything was tough. We kept fourth position from day three and we worked hard not to lose it. If there had been a mistake at the top maybe we could have reached the podium.”– Kuba Przygoński

2009 Dakar winner Giniel De Villiers was unable to add to his impressive list of podium finishes this year, taking eighth overall in the car race. Things took a while to click for De Villiers and co-driver Alex Haro, but when they did the duo won Stage Five.

“It just didn’t seem to be right for us this year. We had a lot of punctures and we got lost just a little bit too much. We had a few things go wrong.”– Giniel De Villiers

A strong second week at the rally helped Cyril Despres and Mike Horn park their Peugeot in the Top 10 of the car race. However, the pair’s final result was always secondary to their data collection during the rally, part of an ambitious project to compete at the 2023 Dakar in a hydrogen-powered vehicle named GEN-Z.

“This rally has ended better than we expected. We had some tough days but we were able to stay positive. We kept in mind that we were here to get information to help develop the project.”– Cyril Despres

Nine-time WRC champions Sébastien Loeb and co-driver Daniel Elena were forced to retire from the rally on Stage Eight. Loeb’s Hunter BRX car was left stranded on the stage following a series of mechanical issues and ultimately gave the pair little choice but to bring their fifth drive at the Dakar to an early conclusion.

“Every day we remind ourselves how lucky we are that this is our job, and to be part of the BRX team. We came to the Dakar with the same ambition as the team; to achieve great results, but [on Stage Eight] we had no other choice but to retire.”– Sébastien Loeb

Red Bull KTM Factory Racing’s Sam Sunderland took the fight to his Honda rivals on the final days of the rally. On Stage 11 Sunderland got between Kevin Benavides and Ricky Brabec to sit second overall with one day’s racing remaining. The 2017 Dakar champion pushed hard from the start of the final stage but ultimately finished third overall behind race winner Benavides and second placed Brabec.

“I tried my best and it wasn’t possible. The guys in front did a great job, congratulations to them. This is the most difficult Dakar I ever did. Really long stages, dunes, stones, riverbeds, mountains… everything you can imagine.”– Sam Sunderland

Narrowly missing out on the overall podium was Dakar rookie Daniel Sanders as the Australian finished fourth in the general classification. The 6 Days Enduro winner scored an impressive six Top 5 stage results during his first-ever Dakar.

“It’s was a pretty perfect Dakar for me. It started off with a good prologue and then every day after that I went out to try and gain as much experience as possible. It’s great to come away with fourth overall and first rookie.”– Daniel Sanders

A clutch issue on Stage Two prevented Matthias Walkner of Red Bull KTM Factory Racing from challenging for the podium. The 2018 Dakar winner enjoyed his ride in Saudi Arabia despite his early mechanical problem.

“It’s always cool to finish the Dakar, even if I didn’t get the result I wanted at the start. I will take so many memories away from this rally.”– Matthias Walkner

It’s a fifth Top 10 finish at the Dakar for Štefan Svitko. The Slovakian was unable to repeat his runner-up result of 2016, but he leaves Saudi Arabia very satisfied with his eighth place finish in the bike race.

“There are so many great rivals at this rally so a result in the Top 10 is always good. We had so many really tough days at this Dakar, it feels great to reach the end.”– Štefan Svitko

Laia Sanz has kept up her remarkable record of finishing every Dakar she has ridden, now taking that tally to 11 editions by ending up 17th overall this year. The GasGas Factory Racing Team rider battled back from a year of injury and illness to complete the Dakar as the best placed female biker, a prize she has now claimed 11 consecutive times.

“It was a really tough year and I struggled a lot to get to the finish line. I’m so happy. I know the result is not what I usually want but I’m really very satisfied with this result.”– Laia Sanz

It was an impressive first Dakar from French rider Camille Chapelière who survived all 12 stages to finish 22nd overall in the bike race. The sand racing specialist had set himself a pre-race target of getting inside the Top 25.

“I’m super happy about my race. After more than 10 days of racing I have no injuries. I enjoyed every single day and it was incredible to be here. The Dakar is legendary for being a hard race to finish so I’m happy to catch the finish line.”– Camille Chapelière

Two-time Dakar winner Toby Price crashed out of this year’s rally on Stage Nine while challenging for the overall lead.

“Finally broken my 30th bone! I don’t remember much but I’ve got a pretty sore collarbone, shoulder and hand and will need surgery for that.”– Toby Price

Before this year Dmitry Sotnikov’s best result at the Dakar had been runner-up in the truck race. The Kamaz driver seemed determined to change that from the moment he set off from Jeddah on Stage One. After day one Sotnikov led the rally and he maintained his place in the general classification throughout to seal an overall win.

“I just have no words, only emotions. I can’t believe yet that we have won. We have been moving towards this victory for several years, gradually approaching it. And now I am very happy, I am proud of all the guys.”– Dmitry Sotnikov

“For the second year in a row I finished Dakar in second place. Of course, like any athlete, I want to win, but I am glad that Dima Sotnikov is in first place. All together we did a great job and in the end got an excellent team result!”– Anton Shibalov

Two-time Dakar quad bike winner Ignacio Casale finished inside the Top 10 on his return to the truck race.

Taking victory in the Lightweight Vehicles race was Chaleco López and his co-pilot Juan Pablo Latrach Vinagre. Despite a tricky Stage Six the pair were able to set the fastest time on five other days and ended up with a winning margin of over 17 minutes. “We had so many really difficult stages this year. I’m so happy for my sponsors, for my country and for my co-driver Juan Pablo. Last year we were on the podium and now we’re back on top. It’s perfect.”– Chaleco López

The only other crew in the Lightweight Vehicles race aside from López and Latrach Vinagre to win more than one stage was 18-year-old rookie Seth Quintero and his co-driver Dennis Zenz. In fact, Quintero is now the youngest ever stage winner at the Dakar. Next year the Red Bull Off-Road Junior Team driver wants to achieve even more.

“Over the two weeks I managed to figure things out the best I could. We came out swinging and we proved our point that we’re here to stay. The Red Bull Off-Road Junior Team is not a team to be messed with. We’ll be back next year and we’ll be back better.”– Seth Quintero

“It’s been nice, especially the last two days. We’ve enjoyed ourselves a lot. Dakar Experience has been good for me because I’ve learnt a lot. I was able to carry on and do more kilometres.”– Cristina Gutiérrez

Now the dust has settled at the 2021 Dakar Rally and we salute all those who made this latest edition truly memorable. For the convoy of racers, thoughts are already focused on preparing mind and motor for a trip back to the dunes next year.