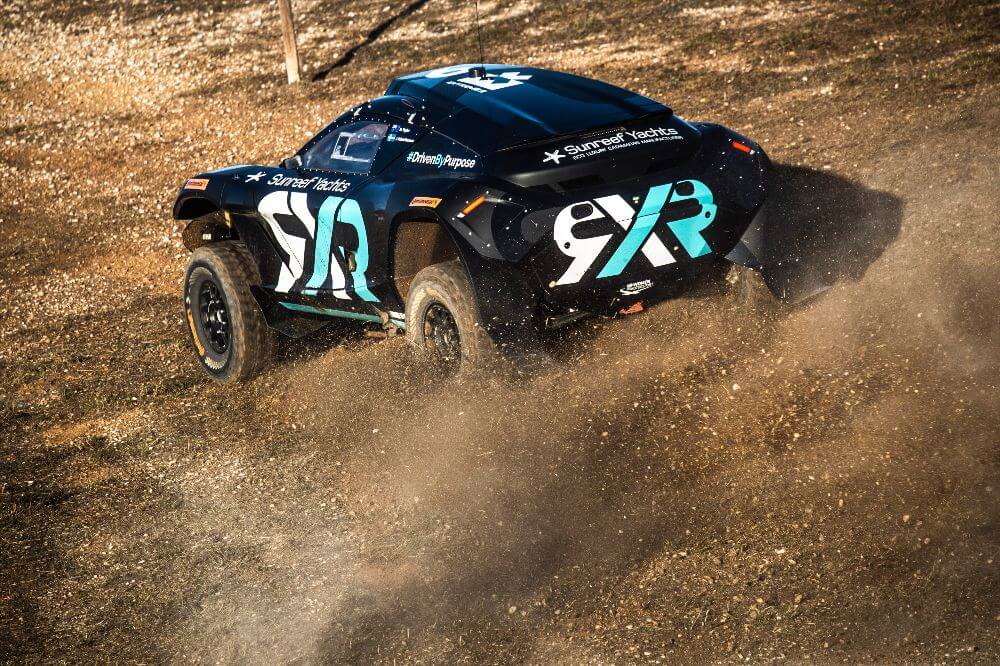 Pre-season Testing Day One: Rosberg Xtreme Racing Makes Strong Start On and Off Track in Spain

Rosberg Xtreme Racing made a positive start to pre-season testing in Spain, with reliability and speed demonstrated on track and the team’s #DrivenByPurpose campaign launched off track.

The test provides the first opportunity for teams to sample the ODYSSEY 21 at its maximum power of 400kW (550bhp) as preparations gather momentum ahead of the first X Prix in Saudi Arabia, March 2021.

Eight teams took to the venue’s two track configurations in foggy conditions, with RXR running on the fast, sweeping Course 2 (3.1km) in the morning session before taking on the hilly, more technical Course 1 (1km) in the afternoon session before a final set of laps for both drivers on Course 2 towards the end of day one.

Following day one, RXR driver Molly Taylor said: “”It’s been a fantastic day driving the RXR ODYSSEY 21 here in Spain. It’s mine and Johan’s first time driving the car at full power and to drive it across two very different track layouts has been very useful and a lot of fun. We seem to be learning a thousand things every kilometre we run so hopefully we can continue with more of the same on day two.”

After his first official day of Extreme E track action, Johan Kristoffersson added: “It’s been great to drive the car at full power and work together with the team; everyone has been focused on adapting and learning as quickly as possible which is important with very few test sessions between now and the start of the season. We’ve gathered a lot of data so I’m looking forward to working with the team tonight to get a plan together for tomorrow.”

Besides the on-track action, RXR reaffirmed its mission to become climate positive by launching its #DrivenByPurpose campaign, an initiative that supports sustainable projects at each of the locations the team visits. As a prologue to the campaign, which will begin in earnest during Season 1 of Extreme E in 2021, RXR has planted 100 trees at MotorLand Aragón in partnership with Life Terra, a foundation driven by a mission to enable citizens to take impactful climate action.

Members of the race team – including both drivers and Team Principal Kimmo Liimatainen – took part in the activity with Life Terra, one of Europe’s largest climate action initiatives which strives to plant 500 million trees by 2025 thanks to support from RXR and the EU Commission. In the Aragón region alone, one third of the area is threatened by desertification and in need of intervention to reverse the detrimental effects of climate change.

Following the on-track and off-track action, RXR Founder and CEO Nico Rosberg said: “It’s been a proud day for everyone involved with Rosberg Xtreme Racing. The team has done a great job on the track with Molly and Johan getting up to speed behind the wheel, and it’s equally fulfilling to see the team launch our #DrivenByPurpose campaign thanks to the project with Life Terra. RXR has a commitment to leaving a positive impact wherever it visits, and this is the first of many examples of that as we continue to grow as a team and a series.”

Kimmo Liimatainen, RXR Team Principal, added: “It’s been a very interesting start to the test and great to see the car running at full power for the first time. It’s been challenging with the poor visibility, but Molly and Johan did a great job with the team to make sure that we got plenty of laps and mileage completed. Our goal is to learn all that we can from the data today to make sure we have another strong day tomorrow.”