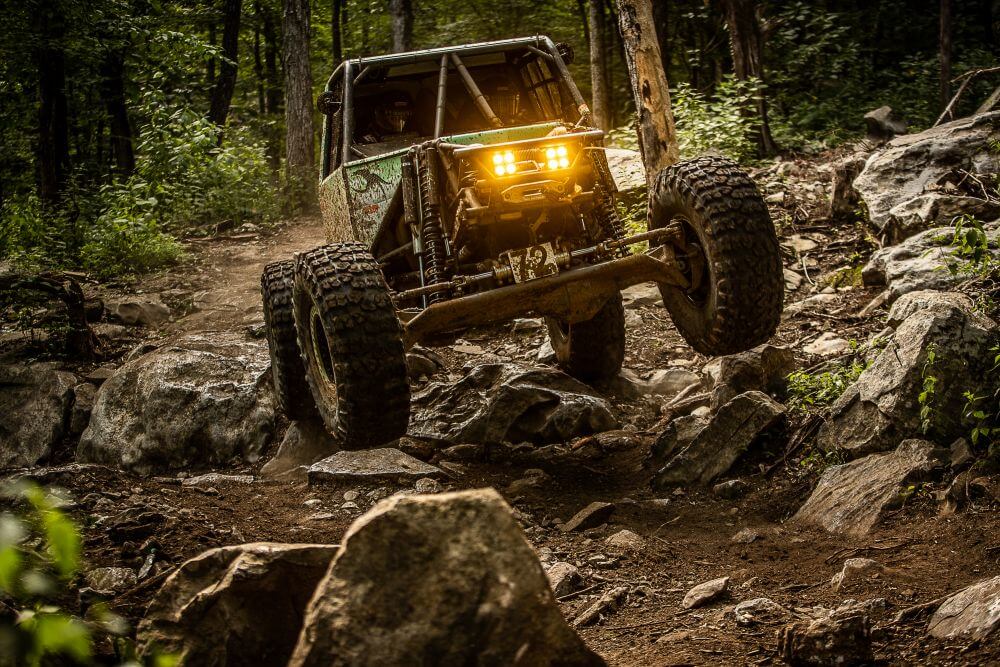 A Successful Tennessee Teardown in the Books

Ultra4 Racing was able to wave the green flag at Adventure Off-Road Park in South Pittsburg, Tennessee for the 4WP Tear Down In Tennessee. With the limited amount of racing in 2020 due to the current COVID19 situation, this would be the first Ultra4 race of the year since King of the Hammers back in February.   Ultra4 took early action in changing its schedule amid the outbreak and shortening the season to two regional races and a National Championship race.

The course at Adventure Off-Road Park would be the Eastern Series race for the year.  It would include tight woods racing with hills and rocks as well as a short course area.  The newly crowned King, Josh Blyler would be looking to keep his win streak going as one of the favorites going into this race.  Josh would have to fight off three other former Kings: Erik Miller, Loren Healy and Shannon Campbell if he would want to take home the win.

The weekends racing would be split up into three separate races.  The morning race would be the UTV Class.  The course would be very challenging for the UTV’s with only four of the fifteen racers finishing on the lead lap.  Jamie McCoy, who had put in an amazing qualifying run with a time in the top five of all the classes, would continue to dominate and take home the win in the UTV race. Below #24 Cole Clark navigating through the terrain.

The EMC Cars would be the second race of the day.  This race consists of three different classes, the Stock, Modified, and Legend cars.  Half way into the second race of the day, Tennessee decided to throw the racers a curve ball when the rain started coming down.  The rocky narrow trails now became a slippery slick mess that the racers would have to navigate through.

Front-runners, Jeremy Jones and Cade Rodd would battle between each other for the entire race in the 4800 Legends Class. With the races being run on corrected time, neither knew who won as they crossed the checkered flag, because it would be so close.  Jeremy Jones would beat out Cade by just seconds to take the victory.

The final race of the weekend would be made up of thirty 4400 Unlimited Class cars, all ready to see who would come out on top.  Having to complete eight laps around the course, these drivers would face an additional challenge.  On one of the eight laps, there would be a Joker line that they would have to take.  Even though it would cut a portion of the course out and be a shorter distance, this section would have the drivers descend down a tight and technical rock trail that could drastically change the outcome of the race if a mistake were to be made.

Josh Blyler would start the race in the top spot after being the fastest in qualifying, followed by Erik Miller, with both of them being in solid axle Miller Pro Chassis cars.  With many different options on parts of the course for drivers to choose different lines, they would have to carefully pick when they would want to try and make passes.  The punishing course would take its toll on a lot of the racers. Paul Horschel,  Rusy Blyler, Levi Shirley, Wayland Campbell and Derek West would all be unable to complete the race because of mechanical failures, each one of them who had high hopes for a win.  Loren Healy was making his way to the front, when disaster struck and his rags for wiping his visor would catch fire under his seat from the heat of the exhaust.  Fortunately he was able to get the fire extinguished and get back in the race, but unable to make up the time he lost.

Erik Miller would get around Josh Blyler to take the lead all the way to the checkered flag with Josh Blyler behind him to take second, followed by Bailey Campbell in third and Shannon Campbell in fourth place.

After a successful weekend, everyone is hoping to keep it going and continue the success into the next regional event of the 2020 season.  With a shortened year of racing,  everyone will be battling for points to see who can take the top spot at the National Championship in October.

See more amazing photos from the wildly successful event – We are looking forward to seeing it again!