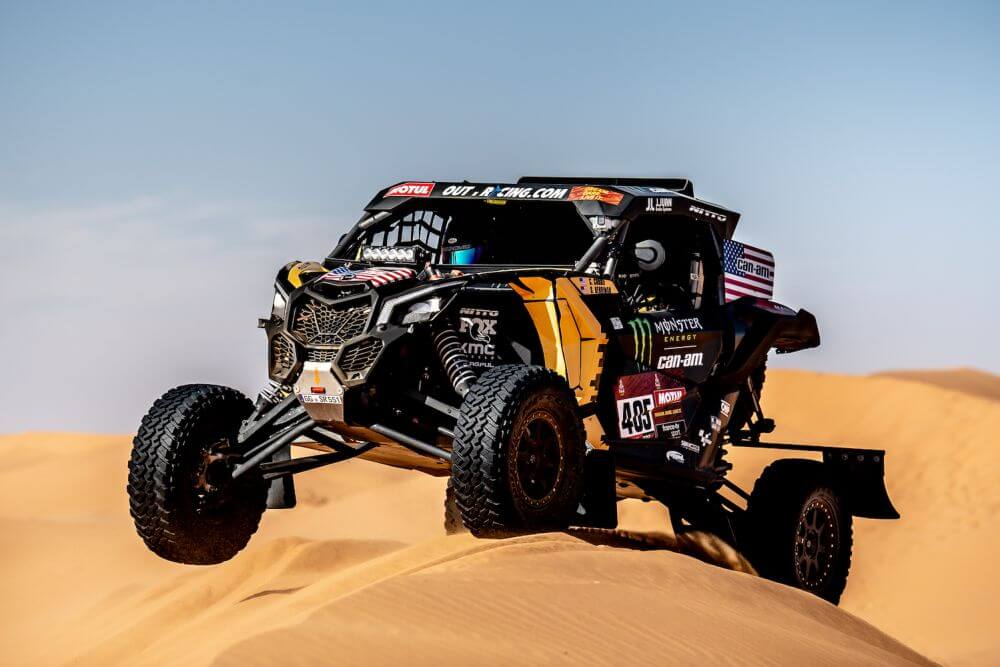 Starting the second half it seemed like the race had started all over again. All the crews were back to their early morning leave times and the drivers just had their cars to walk out to before the stage. They headed out for their 128km liaison to the start line.

“The resumption will be the opposite of a rest day… the longest stage in the Dakar and also one of the most varied. Dunes are scattered along the entire route and the drivers will have to cross small dune fields of a few kilometers. Between these climbing portions, off-road alternates with sectors with numerous crossings where the navigators will have to be on their toes at all times. Fast… but not too fast!” – Dakar

Casey began the day 9m 48s behind last year rally winner Francisco Contardo Lopez. He’d quickly open a minute gap on him by KM52. This would continue and at the halfway point Casey was sitting 2nd on the stage and had opened an 8 minute gap on Francisco when he would get a flat tire and lose 4 minutes of the gap he accrued. But Francisco would have troubles of his own and lose a ton of time on the overall. Casey would finish 2nd on the stage and take over the lead on the overall, now with a 30+ minute lead over second.

“Day 7 is in the books and it looks like we finished 2nd place today. We played a big team role, I had both of my teammates with me and it really worked out. We had a great day, I lost one tire. There were some nasty rocks out there. It is what it is. I’m just going to keep moving forward and keep pushing. We got a long way to go.” – Casey

A damper was put on the day after the tragic news of Paulo Gonçalves passing.

“Paulo Gonçalves, riding motorbike no. 8, has died from a fall sustained 276 kilometres into today’s special. The organisers received an alert at 10:08 and dispatched a medical helicopter that reached the biker at 10:16 and found him unconscious after going into cardiac arrest. Following resuscitation efforts in situ, the competitor was taken by helicopter to Layla Hospital, where he was sadly pronounced dead.

40-year-old Paulo Gonçalves was taking part in his 13th Dakar. He made his debut in 2006 and had finished four times in the top 10, including an impressive performance as runner-up to Marc Coma in 2015. Paulo Gonçalves, the 2013 cross-country rallies world champion, was sitting in 46th place overall after stage 6 of the 2020 Dakar.

The entire Dakar caravan would like to extend its sincere condolences to his friends and family.” – Dakar

The bikes and quads stage 8 have been cancelled for the riders to mourn the loss of their friend.

The car categories will begin the day now with zero bike tracks ahead of them on the second loop stage of the race.

Story and photos courtesy of CaseyCurrie.com