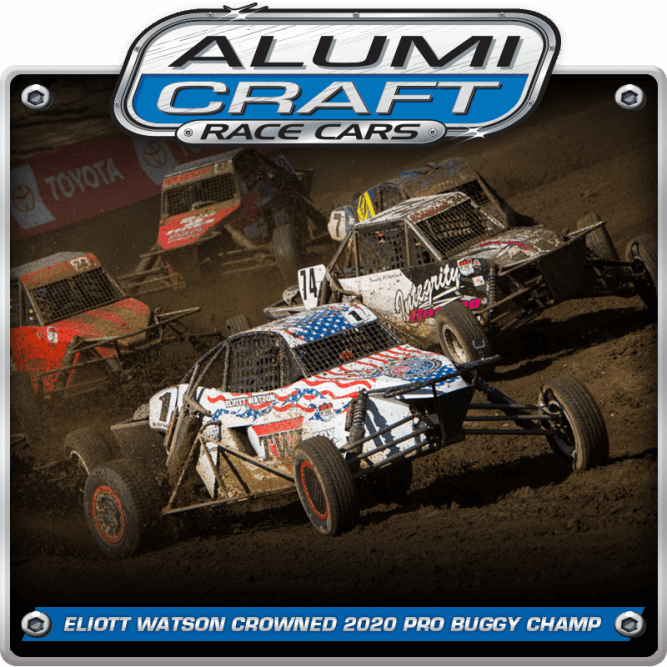 San Bernardino, CA
Alumi Craft racer Eliott Watson, a 2nd generation off road racer accomplished the dream season of his short course career. During the 10 Round schedule of the Lucas Oil Off Road Racing Series (LOORRS), Watson commanded a consecutive 8 race victory winning streak to capture the 2020 Championship and become a repeat Pro Buggy Champion. Wearing the #1 plate on his Alumi Craft Race Car as the reigning 2019 Pro Buggy Champion, Watson backed it up with two additional podium finishes and earned the most fast lap awards above all other series competitors. The cherry on top, Eliott was selected by his peers to receive the prestigious LOORRS Driver of the Year Award.

Watson commented after the 2020 awards ceremony, “Tonight was so awesome! We brought home back-to-back Pro Buggy Championships, Most Fast Laps Of The Year, and the one that means the most to me is the Driver of the Year Award. Thank you so much to everyone who voted to make this happen, it means the world to me and I could not be happier to finish the season off this way.”

Back when the 2020 season started in late July, the Watson’s on a whim, had just recently decided to race the Alumi Craft Pro Buggy only two weeks before the first race “just for fun.” Eliott ended up landing on the Round 1 podium with a 3rd place finish. That same weekend in Round 2, Eliott steered it to the top by capturing the Qualifying Pole, a feat he owned for most of the series, and finished the race in 2nd place. From Round 3 and on, the #1 Alumi Craft was victorious for the remaining 8 races.

The series’s culmination featured Rounds 9 & 10, the General Tire Golden State Lucas Oil Off Road Nationals, at Glen Helen Raceway. Watson, in commanding lead of the Pro Buggy Points, continued his domination and captured the remaining first-place victories to confirm the 2020 Championship. In the #15 Alumi Craft, fellow racer Trey D Gibbs finished on the podium in 2nd Place for both races and finished 2nd in season points.

“Receiving the Driver of the Year award this past weekend was surreal, to say the least,” Eliott stated. “I have looked up to the people who have earned this trophy my whole life. I always thought it would be too farfetched for a kid pitting under a couple of tents to pull it off. Over the last few years, our team has really grown and learned about what it takes to win races. We have taken hundreds of notes on things where we found a bit of speed and things that we tried but hurt us. Thank you to Roy Valenzuela and Scott Prill for dedicating so much of their time to keep up with our busy schedule of racing. It got pretty hectic for a couple of weeks, but we kept at it every day. Our family sacrificed so much to make this happen and I can’t thank them enough for all they do. Also, I want to recognize Luke Knupp, who was my spotter for the last two years. He has done an awesome job keeping me focused forward and helping me minimize mistakes. All of my friends and partners, you guys are rad and make it, so fun to keep going to races every weekend. We have had an awesome time racing the Lucas Oil Off Road Racing Series this year.”

No matter if you are a 4x Racing Champion, on an eight race winning streak, Driver of the Year, or just looking at getting into an off road race car for the first time, start in an Alumi Craft Race Car. You will increase your chances to make it to the finish line and if you keep at it, you will likely accomplish one of the accolades featured above like young champion Eliott Watson. Contact Alumi Craft Race Cars for an expert consultation on what is needed to win races. Give Alumi Craft a call at 619-596-9841 or go to: http://alumicraft.info/ to find out more about our race products and services.