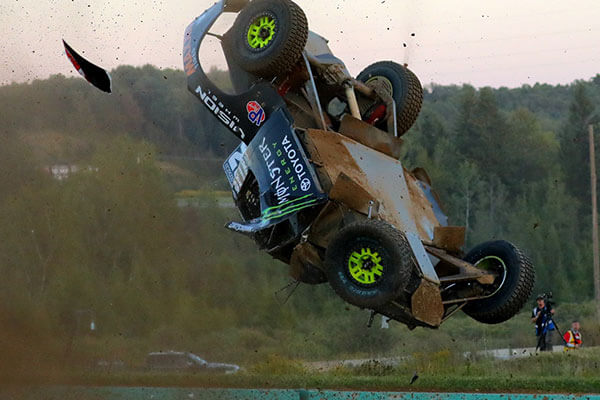 Crandon, WI (Sept 7, 2020) — COVID-19 did not stop the masses from showing up at “the Big House” for the annual Labor Day weekend races. The much anticipated “Daytona 500” of off-road racing had championship implications with only 2 weekends of racing remaining in the 2020 season. Crandon International Raceway has a way of making or breaking seasons. The Greaves Duo provided a lot of footage for the highlight reel but was disappointing for their high standards.

CJ took the win in Pro Stock SxS UTV on Saturday and followed that up with a close 2nd in the Pro Mod UTV class. The Pro-4 race was bittersweet for Greaves Duo with a scary turn one crash for Johnny while leading the race. CJ finished the race in 2nd thanks in-part to a late race caution that ended with a green/white checkered. Johnny sat out Sunday’s races and CJ suffered a late mechanical problem that took him out of the race. He was running in 2nd at the time. He did not race in the Pro Stock or Pro Mod SxS race in order to get his truck ready for the Cup Race. He was looking strong and running in 3rd when he developed a flat that again took him out of the competition.

Saturday: A huge field of more than 20 UTV’s stretched across the starting grid for the famed landrush start. As the field emerged from the cloud of dust out of Potawatomi Turn One, CJ had his Monster Energy/Yamaha Racing/Maxxis Tire/Yamalube UTV in second. On lap 2, he grabbed the lead in the sweeping gravel pit turn and checked out. He held the lead through the competition caution and into the 2nd half of the race. CJ Greaves, along with John Holtger and Jason Luburgh, distanced the rest of the field and were pressing each other. Holtger and Luburgh battled each other and allowed CJ to take the win.

Sunday: CJ did not race in the Sunday race in order to work on his damaged Pro-4 truck. He remains in first place in the standings by more than 40 points.

Saturday: CJ got the holeshot through turn-one in the Pro Mod Side-by-Side race on Saturday. The top 2 cars were Yamaha’s for the 12 lap race. Rodney Van Epperen and CJ were nose to tail through much of the first half of the race. As the two approached the last turn to take the yellow competition caution flag, Van Epperen was able to pass CJ who had check up to protect the inside line.

Following a lengthy caution, Rodney and CJ raced to the finish line. CJ was unable to make any ground on the front runner and claimed 2nd place. He did not race on Sunday but in spite of that, he 10 point lead in the points standings.

Saturday: 13 trucks made up the Pro-4 field for Saturday’s 9-lap race. As usual, racers from the West Coast joined the Midwest for the Labor Day weekend races. All the trucks survived turn-one that put Kyle LeDuc in the lead. Early in the race, Bryce Menzies spun-out in the gravel pit and collected CJ Greaves in the process. Johnny powered ahead into 2nd but a full course caution came out as Chaney hit the K-rail. Both CJ and Chaney were able to continue but had to join the rear of the field.

Before another lap was complete, Bryce Menzies had a spectacular crash that took him out of the rest of the weekends races. The crash brought out a red flag stoppage of the race that lasted a long time to safely get Bryce out of the truck.

When racing resumed, CJ quickly made a pass into 3rd. Johnny was already pressuring race leader and the three Monster Energy sponsored trucks took the competition caution to set the stage for a 2nd half showdown.

When the green flag flew, Johnny went to work and made an amazing slide-job pass on LeDuc to take the lead in the gravel pit turn. He powered ahead and began to stretch his lead when disaster struck. Johnny hit a hole as he entered the infamous turn-one that sent him careening and flipping in a horrendous crash, reminiscent of his now famous 2006 crash. He landed off the the track but right side up. The scary scene sent a shock through the crowd. The safety crews were careful to get Johnny out of the truck and he walked away from the crash, a testament to construction of his vehicle and safety equipment.

CJ was now in 2nd, shaken but determined to finish strong. A green/white flag gave him only one lap to make a charge for the win. The one lap was not enough time, and CJ settled for a 2nd place podium.

Sunday: With both Johnny Greaves and Bryce Menzies out of the race, CJ Greaves was hoping to give LeDuc a run for the World Championship trophy. LeDuc and Greaves were the top two coming out of turn-one. The two went side-by-side as CJ made several attempts to pass for the lead. He almost made the pass on lap two but settled back to regroup.

After the competition caution, the same running order put Greaves again pressuring LeDuc. On lap 7 of the 9 lap race, CJ developed a mechanical problem that took him out of the race and dashed his hopes of making up some ground in the points standings.

17 Pro-2 trucks and 12 Pro-4’s lined up to compete for the coveted Crandon World Cup. The 10 lap, no competition caution race gives the Pro-2’s a head start and the Pro-4’s have to catch them and pass the entire Pro-2 field in order to get the win. The field included motocross legends Travis Pastrana and Brian Deegan and a host of veterans from both the West Coast and Midwest.

In a night and day frenzy, CJ and the Greaves crew managed to put his Monster Energy Toyota back together and ready for the race.

After the Pro-2 head start, CJ Greaves was in 3rd in the Pro-4 group that was charging towards their two-wheel drive counterparts. Racers were having rollovers and problems. As the field thinned, CJ had problems of his own in the form of a flag on lap 3. This took him out of the competition.

Kyle LeDuc was in the lead and looking like he was going to walkaway with the victory when his vehicle caught on fire. Last year’s winner RJ Anderson ended up with the top spot on the podium.

The Greaves Duo will regroup and head back to Crandon to finish out the season on September 26-27.

The back-to-back wins for CJ tightened up the points standings as the Championship Off Road series prepares to head to The Big House of Crandon International Raceway on Labor Day weekend. Only 14 points separate CJ from LeDuc. Follow all the action Livestreamed on ChampOffRoad.com.