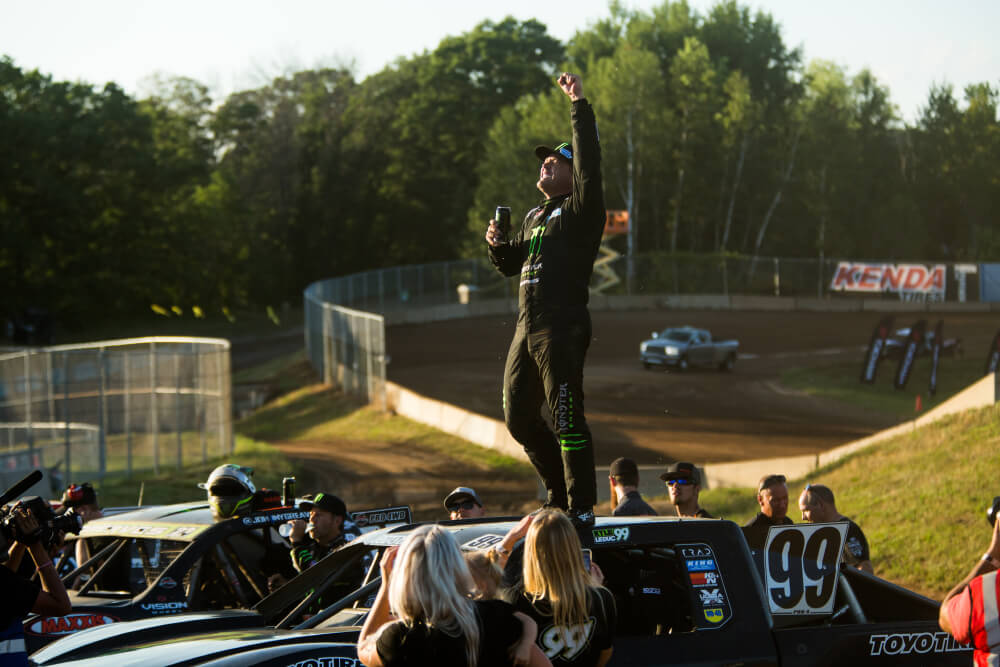 Kyle LeDuc and the LeDuc name are synonymous with off-road racing. Having grown up around the track Kyle and his brother Todd have been entrenched in off-road royalty their entire lives thanks to their father Curt and his incredible racing career.  Kyle soon became one of the youngest off-road champions, as he began driving professionally at the age of 19, now at 38 he’s yet to slow down one bit.   He just grabbed his 101st career win at the ERX MotorPark in Elk River, MN during his first “Perfect Weekend.”  Which is qualifying, and taking first every time the truck entered the track over the weekend.  This was his debut in the COR series and first race since leaving the Lucas Oil Series, making it even that much more special.  The fans came out to see a champion, and that’s exactly what they saw.

Several days later LeDuc signed with renowned race team Chip Ganassi Racing to pilot a fully electric vehicle in the all new Extreme E series debuting in 2021.  When we said after almost 20 years LeDuc has yet to slow down, we meant it.   We recently had a chat discussing his recent move to the COR series, 100+ career wins and a few other hot topics, including yet another huge announcement.

ORR: Explain briefly about why you decided to leave the Lucas Oil Series, and choose to head to the Midwest?

I would like to start by saying we definitely didn’t choose one series over the other. We ended at the COR series because we all knew that those drivers there were not going to split and go to the Lucas series. So after many weeks of weighing our options, we decided internally to go to the COR series. There are many pros and cons to the Lucas Series as all or some teams know, but there may be some at COR as well.  As of now, after attending the first event we are very happy with our decision and look forward to growing our relationship with this series. We always put our heart and soul into the Lucas Series, but it always seemed to be a very uphill battle with rules and regulations that just kept digging into the drivers pockets and pushed many teams out. I hope this new series will look at the efforts, and be closer to the drivers that give their lives to this sport and get the feeling like it’s all worth it in the end.

ORR: You now have over 100 career wins, tell us what that felt like to achieve that level of awesomeness?

The feeling of 100 is insane! There are tons of drivers that fight and dedicate their career and life to just get one!! I’ll tell you what, the 1st, the 20th, the 47th, the 83rd and the 100th, they all feel the same! Just knowing you were the best that day and the other 99 days you were the best also!! Crazy feeling the adrenaline that runs through your body in the last lap on your way to a win. Some are extremely easy and some are a full on fist fight to the end. I treat every win like my first because you never know when it’s your last.

ORR: How was it racing at ERX Motorpark, and how have the people/fans been?

Lining up a new track and a new series is very intimidating, and there is tons of pressure to perform. I thrive on that! We went in not knowing how things would go and after the first practice we had a good idea that we were going to be doing some ass kicking this weekend. It was literally our best weekend ever. I’ve always wanted a perfect weekend. That’s fastest in every single time we roll out and win both races, we got it done this time, and by a huge margin. I’m very proud of our team’s upgrades on the truck and just for everyone onboard wanting and deciding to step up and move series’. Some fans will for sure miss us on the West coast and that sucks, but the fans out here finally get some good action and got the LeDuc name back to the Midwest.

ORR: Explain briefly the feeling of signing with Extreme E, and what this might do for the sport.

The Extreme E series is a huge new adventure for us, and we’re doing it with the biggest name in American and world wide Motorsport, Chip GANASSI Racing!! That sentence seems fake for me to say even now after we’re all signed and planning for 2021. I 100% plan to continue kicking ass in short course in 2021 but this new series is something that we, as a family and team are going to attack just like we do every short course and desert race we enter, flat out. I hope I can bring the results to the program, as well as drive it the way I enjoy driving, which is right on the edge. The big twist and most unique part of this series is the diversity factor. My teammate Sara Price will be splitting every race we run as will every team, being that all teams have a male and female driver. Pretty excited to get her and myself in the trucks to see what they are all about, and find their limits, but trust me when I say, I will push these trucks and you will see us backing it into corners fully Electrified and blowing doors off in the world wide, door to door record breaking series that is Extreme E!!

ORR: What’s next for Kyle Leduc?

Literally anything, I enjoy building, maintaining, racing and just being around the dirt of off-road racing. When the folks over at GANASSI call you and want you to drive their truck, it makes it all worth it, the dedication, the desire to win and the strength of myself and team are the reasons they called me and that was a major reason I was more than thrilled to jump on board. They like dirty hands, and the “know your truck and know how to drive it”, type of style we have. I won’t let them down. Also an end goal….. Trophy Truck done my way……. (coming soon)

With the hint of a LeDuc Trophy Truck build, it’s surely an exciting time in off-road racing, and with the continuous schedule changes due to Covid-19, we can all agree these huge announcements are very welcomed!  Best of luck to Kyle, his entire team, and family as they all embark on so many new ventures.